Contans WG biological fungicide (active substance: Coniothyrium minitans strain CON/M/91-08 – C. minitans) breaks the cycle of Sclerotinia diseases that can significantly reduce yields in horticultural and arable crops alike. Based on a naturally-occurring fungus, it neutralises and eliminates the disease source, limiting the potential for infection. Contans WG is approved for use on all edible and non-edible crops. 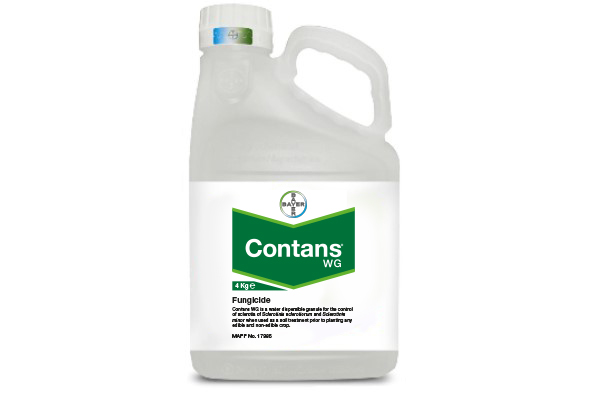 Learn about the benefits of Contans WG

What is Contans WG?

What is Contans WG?

Contans WG is a water dispersible granule for the control of sclerotia of Sclerotinia sclerotiorum and Sclerotinia minor when used as a soil treatment prior to planting any edible and non-edible crop.

Next
Why you need Contans WG

Why you need Contans WG

Sclerotinia. Now there’s a way to break the cycle.

Sclerotinia disease can be devastating. It’s estimated to reduce crop yields significantly in the UK and can result in total crop losses.

Now you can help ensure the health, quality and yields of your crops with an effective biological control to integrate with conventional foliar treatments: Contans.

Whereas conventional foliar treatments target Sclerotinia disease in-season, Contans decreases Sclerotinia loading right from the start. Based on a naturally occurring fungus, it neutralises and eliminates the source of the disease, limiting the potential for infection and spread in your crops.

Contans is a rotational tool to reduce disease loading as part of IPM programmes. It enhances pest and residue management, is approved for all edible and non-edible crops and can be used on its own or to complement chemical-based treatments to improve long-term Sclerotinia management.

Why Sclerotinia builds up in the soil

Sclerotinia is very difficult to control using traditional foliar treatments alone due to the inoculum being replenished from one season to the next where sensitive crops are grown. Sclerotia (resting bodies) of Sclerotinia can survive for up to 10 years in the soil.

Sclerotia germinate and develop apothecia if within the top 3-5 cm, so annual cultivations continue to bring problems to the surface even when sensitive crops have not been grown in the rotation for several years. The wide range of crops that Sclerotinia spp. can affect is listed below.

Next
How Contans WG works

The performance you need to ensure yields

Contans WG effectively cleanses your soil and improves its health by reducing the source of Sclerotinia disease.

The active ingredient – spores of the naturally occurring fungus Coniothyrium minitans – attacks and destroys the sclerotia and mycelium of Sclerotinia spp. before it can infect the crop. Total destruction generally takes 6 to 12 weeks but sclerotial viability is typically inhibited much sooner, depending on factors such as soil temperature and moisture. Coniothyrium minitans also produces the anti-fungal metabolite macrosphelide A whose action inhibits mycelium extension.

In situations of heavy infestation a one-time application of Contans or conventional chemical foliar treatments is unlikely to give adequate control. Best results can only be achieved with multi-year or multi-crop rotational treatments as illustrated below.

With every application of Contans on average 80 to 95% of sclerotia in the soil layer of the application area can be destroyed. Sclerotinia loading is thereby strongly reduced from one application to the next. However, in situations with heavy infestation a considerable number of uncontrolled sclerotia may remain viable. An integrated programme with foliar products can offer sustainable control and improve the effectiveness of long-term Sclerotinia disease management programmes. 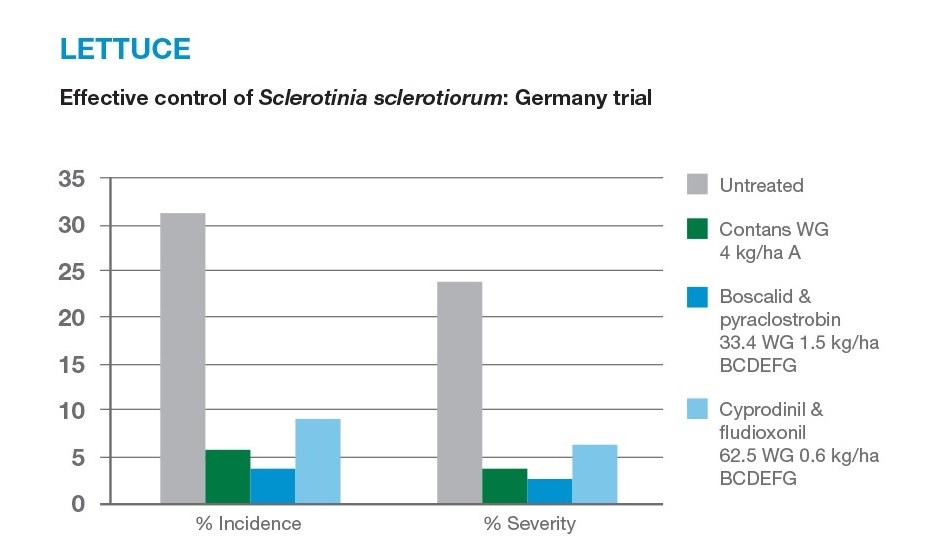 This graph shows the infestation level of S. sclerotiorum assessed in lettuce after the last foliar application.
Contans applied as a solo application before planting at 4 kg/ha showed similar incidence and severity (<5%) compared to either foliar treatment applied 6 times.

This graph shows % incidence of Sclerotinia infection in carrots harvested and stored, 36 days after application. Contans (applied as a single application before planting) or 5 foliar sprays with the chemical standard reduced the incidence of infection to ~10%. However, an integrated programme of Contans and Nativo 75WG showed the best disease reduction.
In this example Contans kills the Sclerotinia in the soil, whereas the chemical fungicide prevents disease attack on leaves. The best Sclerotinia control is achieved by integrating biological control in the soil with chemical control on foliage.

Contans WG can be used in the soil for all crops susceptible to Sclerotinia sclerotiorum and Sclerotinia minor infection.

Contans WG has shown effective control in the following susceptible crops: oilseed rape, beans, lettuce, cucumbers and sunflowers. Other crops also known to be susceptible to Sclerotinia sclerotiorum and Sclerotinia minor infection include, but are not limited to: asparagus, cabbage, carrots, celery, chickpeas, lentils, peas, peppers, potatoes, tomatoes, and watermelon.

There are no rotational crop restrictions following the use of  Contans.

Contans is applied by spraying the soil surface or crop  debris following harvest of the previous crop and then incorporating the sprayed soil and/or debris into the upper soil layer. Thorough spray coverage is needed to provide a uniform deposit of Contans on the soil. Contans may be applied in conventional spray equipment. Maintain agitation continuously while spraying. For tractor-mounted sprayers, use of a spray boom equipped with fan nozzles provides enhanced coverage.

The entire soil surface should be treated as sclerotia germinating in untreated soil will produce spores which can infect the crop. In glass-houses, untreated areas such as margins can be covered by a film to minimise spread of spores.

Apply Contans at a rate of 2 to 8 kg per hectare (see table below), three months prior to the onset of disease development,  to allow for the active ingredient to reduce the inoculum load of sclerotia in the soil. For example, apply Contans in the autumn for a spring planting.

Once the product has been applied onto the soil, the treated soil surface must immediately be incorporated using a rotavator or rotary harrow. Contans should be incorporated  as thoroughly and uniformly as possible, to a depth of 10 to 20 cm. Treated soils should not be ploughed, either to incorporate Contans or prior to planting the crop following a Contans application.

Any cultivations or planting operations must not disturb the soil below the depth to which Contans WG was incorporated, to avoid bringing up sclerotia from untreated soil lower in the profile.

Contans should be applied at least three months prior to an anticipated Sclerotinia outbreak. This means on crops that are infested directly by mycelium, the application should take place at least 3 months prior to planting e.g. lettuce, endive, parsley, chicory.

On crops where infection occurs from ascospores, such as cucumber, beans, oilseed rape etc., the soil can be treated just before planting, provided that the earliest occurrence of infection is likely to be 3 months or more after planting or sowing of the crop. This allows the active ingredient to destroy the sclerotia in the soil, before they are able to produce fruiting bodies (apothecia), which ultimately eject ascospores.

The rate of application depends on the depth of incorporation.

Apply Contans at a rate of 2 kg per hectare to harvested crop debris. Once the product has been applied, the treated debris must immediately be incorporated into the upper soil layer to a depth of 10 cm. A post harvest treatment of the soil and harvest debris with Contans prevents a new contamination of the soil with sclerotia produced by the previous crop infection and reduces the contamination of the soil step by step.