A pre-emergence herbicide for the control of annual broad-leaved weeds in potatoes, with EAMUs enabling pre- and post-emergence use in numerous vegetable crops. 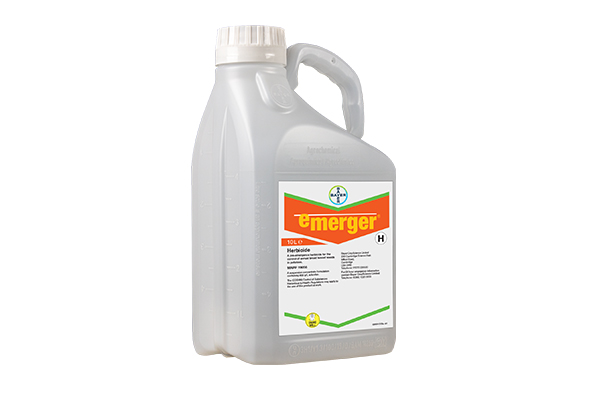 Further information about why to use Emerger

A pre-emergence herbicide for the control of annual broad-leaved weeds in potatoes.

To protect aquatic organisms, respect an unsprayed buffer zone to surface water bodies as specified for the crop.

Horizontal boom sprayers must be fitted with three-star drift reduction technology. Low drift spraying equipment must be operated according to the specific conditions stated in the official three-star rating for that equipment as published on HSE Chemicals Regulation Division’s website. Maintain three-star operating conditions until 30 m from the top of the bank of any surface water bodies.

Do not allow direct spray from horizontal boom sprayers to fall within the distance specified for the crop to the top of the bank of a static or flowing water body, or within 1 m of the top of a ditch which is dry at the time of application. Aim spray away from water.

Buffer zones of more than 5 m cannot be reduced under the Local Environment Risk Assessment for Pesticides (LERAP) scheme. 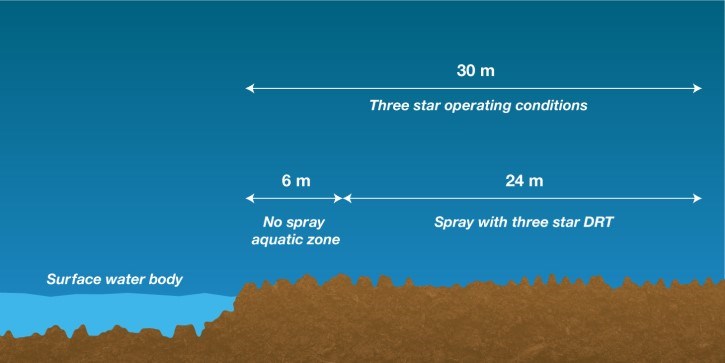 Next
Why you need Emerger

Why you need Emerger 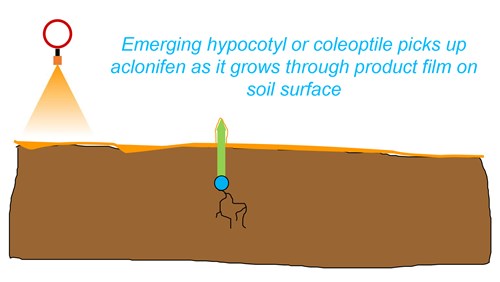 Emerger is taken up by the shoots, not roots. For optimal uptake and activity, Emerger should be applied to the ground surface to form a homogenous film. A friable and level seedbed will aid efficacy.

In trials it has shown high levels of activity against nettles, polygonum species, brassica weeds (charlock, runch, volunteer OSR and shepherd’s purse), Chenopodium weeds (fat-hen and orache) and made a good contribution to control on grass weeds

Emerger is absorbed primarily through the shoot of emerging seedlings as they grow through the layer of herbicide applied pre-emergence to the soil surface. Susceptible weeds can emerge, but these will become chlorotic, their growth will be retarded leading ultimately to death.

After pre-emergence application do not disrupt the herbicide layer. Any form of mechanical cultivation or disruption of the soil surface by any other method will reduce the level of weed control provided. 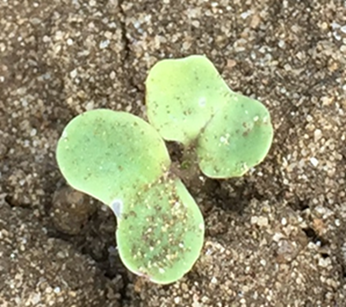 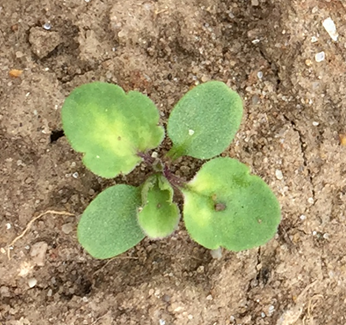 A pre-emergence application of Emerger at 1.75 L/ha has provided a high level (>85%) control of the following broad-leaved weeds:

A pre-emergence application of Emerger at 1.75 L/ha has provided good (85% > 70%) control of the following broad-leaved weeds:

A pre-emergence application of Emerger at 1.75 L/ha has provided average (70% > 55%) of the following broad-leaved weeds:

* Indicates the data contained for this weed is from a dose rate of 1.5 L/ha Emerger, due to reduced data being available at 1.75 L/ha. Increased control may be seen at 1.75 L/ha

Established broad-leaved weeds growing from rootstocks will not be controlled by Emerger. As with other residual herbicides application to a fine, firm seedbed will optimise efficacy. Efficacy will be reduced where application is made to cloddy seedbeds or where there is disruption of the soil surface after application.

2 kg/ha Artist + 1.75 L/ha Emerger is a very robust tank mix that will provide all round control of potato weeds. Emerger bolsters the broad-spectrum weed control of Artist and provides additional activity against high polygonum pressure.

A pre-emergence application of Emerger at 1.75 L/ha has provided good (85% > 70%) control of the following grass weeds:

Emerger may be used on all commercial varieties of potatoes

Ridges should be well rounded with few clods. Cultivations should produce a soil tilth that requires no further improvement after planting. Cultivation after spraying will encourage weed germination and reduce the residual activity of Emerger.

Ensure Emerger is applied evenly and uniformly to both sides of the potato ridges. Care must be taken to ensure that application takes place no sooner than 7 days prior to crop emergence. 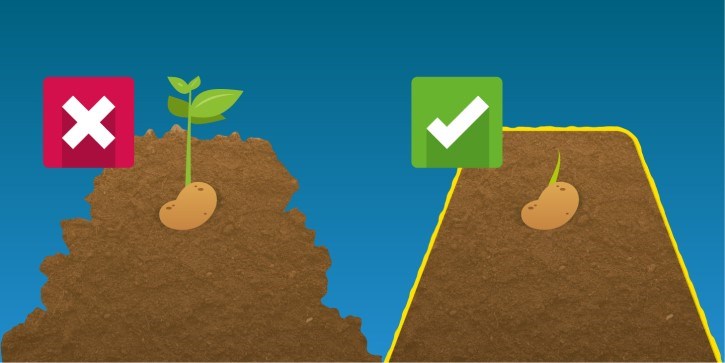 On mineral soils with a high organic matter content and on peaty or organic soils the residual activity of Emerger may be reduced.

After a potato crop treated with Emerger, oilseed rape, field pea, dwarf French bean, wheat, barley, oat, winter triticale, winter rye, sugar beet, maize, and sunflower can be established in the normal rotation or in the event of failure of the treated crop, provided that cultivation (using cultivator, disc harrow or similar) and thorough mixing of treated soil has been conducted to a depth of at least 10 cm.

Radish and phacelia require a period of at least 120 days after application, or plough to a depth of at least 20 cm before drilling.

When herbicides with the same mode of action are used repeatedly over several years in the same field, selection of resistant biotypes can take place. These can propagate and may become dominating. A weed species is considered to be resistant to a herbicide if it survives a correctly-applied treatment at the recommended dose. A strategy for preventing and managing such resistance should be adopted. This should include integrating herbicides with a programme of cultural control measures.

The latest guidance is available from the Weed Resistance Action Group (WRAG).

Users are required to be in possession of the relevant Extension of Use details. Electronic copies of Extensions of Minor Use can be obtained from the Chemicals Regulation Division (CRD) website Extension of Authorisation for Minor Use Database.

Persons using the product to which an extension of authorisation applies should acquaint themselves with and observe all requirements contained within the Regulation (EC) No 1107/2009, including the duty on the holder of any extension of authorisation to notify information on potentially dangerous effects, a contravention of which is a criminal offence under those regulations.

Neither the efficacy nor the phytotoxicity of the product for which this extension of authorisation has been granted has been assessed and, as such, the user bears the risk in respect of failures concerning its efficacy and phytotoxicity.

Emerger has EAMUs for a wide range of vegetable and herb crops.

The use of Emerger on crops grown from seeds requires extreme caution as damage may occur if cool and wet conditions occur after application.

Emerger needs to be applied uniformly to an even, friable seedbed to form a consistent film. Uptake is by shoots not roots; it enters weeds through the cotyledons or the coleoptile of seedlings. It does not stop weeds germinating but affects sprouting weeds. Its performance is influenced by the seed's internal resources, speed of growth and volume of active substance absorbed.

Typical symptoms of Emerger are chlorosis and necrosis on the tissues of young, emerging sprouts and shoots. Later, weeds stop growing and perish. As Emerger is not taken up by plants’ roots, it is not dependent on soil moisture and temperature at the time of use. It remains active for 2-3 months.

After application do not disrupt the herbicide layer. Any form of mechanical cultivation or disruption of the soil surface will reduce the level of weed control. Follow normal drilling / planting practices and ensure the seed is well covered.

The use of Emerger on drilled onions, even at low application rates requires extreme caution:

Pre-emergence use of Emerger on sets is likely to be safer than on drilled onions though limited experience suggests the application should be limited to 1 L/ha.

A tank-mix containing the following active substances has performed well in trials:

Prior to the loss of linuron, the standard pre-emergence mix for carrots was pendimethalin + clomazone + linuron. In trials, similar weed control has been seen where Emerger replaced for linuron.

In addition to its broad spectrum of control, carrot, parsnip and onion growers will benefit from its contribution to control of annual meadow-grass, knotgrass, charlock and cleavers and its useful activity on groundsel. 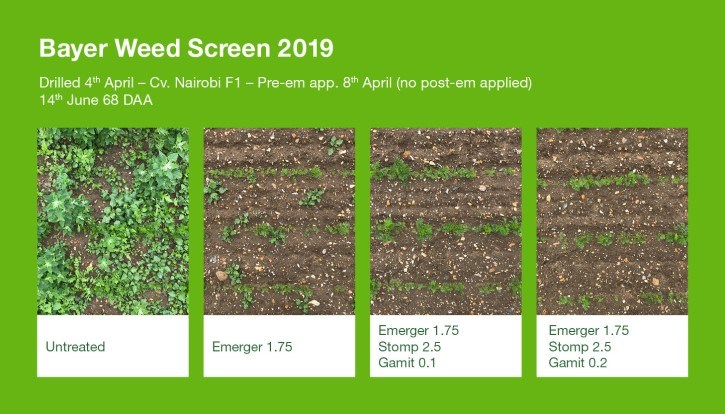 Emerger contains aclonifen, Stomp Aqua contains pendimethalin, Gamit contains clomazone. All other brands listed may be trademarks of Bayer or of other manufacturers and proprietary rights may exist.