Conviso One is the dedicated herbicide for weed control in Conviso Smart sugar beet varieties. Containing two highly effective acetolactate synthase (ALS) inhibiting herbicides, Conviso One controls a range of grass- and broad-leaved weeds through contact and residual activity with only a single application. 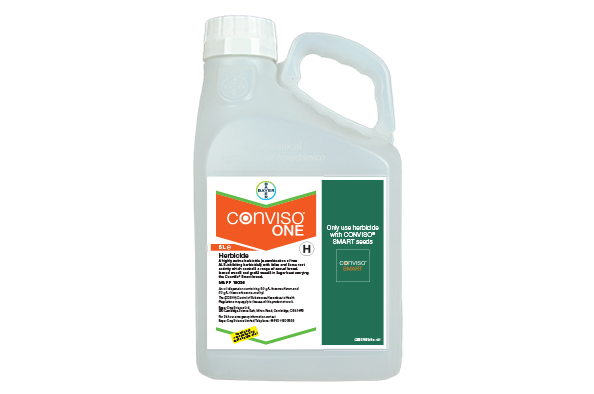 Further information about why to use Conviso One

Conviso One is a post-emergence broad-spectrum herbicide containing foramsulfuron and thiencarbazone-methyl, two highly active ALS herbicides. It is for use exclusively in ALS-tolerant sugar beet varieties known as Conviso Smart.

Conviso One has a single application rate of 1L/ha and should be applied at the 2-4 true leaf stage of the target weeds. Although able to control a wide range of weeds, fat-hen is likely to be the marker weed in most situations, so application should be timed accordingly. In crop terms, this is likely to be around growth stage 14-18, four to eight true leaves.

It should not be mixed with other herbicides but can be applied in sequence with other non-ALS containing herbicides where non-controlled weeds, such as resistant grassweeds or volunteer potatoes are present.  Herbicide uptake is via both leaves and roots with its soil movement influenced by soil moisture status.


Next
Why you need Conviso One

Why you need Conviso One

With a single application rate and only one application per crop, weed control could not be any easier. Applied between growth stages 14-18, the typical window of application for Conviso One sits neatly between the timing of the second and third application of a standard programme using non-ALS tolerant varieties. This spreads the workload at one of the busiest times of the crop calendar.

Where non-controlled weeds such as resistant grassweeds or volunteer potatoes need treating, a separate application should be made specifically to treat these weeds. Where non-ALS tolerant varieties are also grown, this application can be timed to coincide with treatments in other beet crops.

Conviso One offers excellent control of a wide range of broad-leaved weeds.

Weed beet can cause significant yield losses and is an unwanted host for pests and disease. It is not possible to control weed beet with classic sugar beet herbicides meaning growers have to rely on mechanical or manual weeding which is both costly and time consuming.

By adopting the Conviso Smart system growers have a unique opportunity to reduce the weed beet burden resulting from non-Conviso Smart varieties with a single application of the Conviso One herbicide.

Next
How does Conviso One Work?

How does Conviso One Work?

Conviso One has been developed using classic breeding techniques such as those utilised in the introduction of rhizomania resistance and nematode tolerance.

More than 1.5 billion cells were screened to locate this naturally occurring tolerance. It formed the basis for the Conviso Smart system.

Next
When and How to Apply

When and How to Apply

The recommended timing of application is when the weeds are at the two to four true leaf stage, but it can control weeds up to six true leaves depending on species. In most situations this will coincide with an application during crop growth stage 14 to 18, the four to eight true leaf stage.

In practice weeds rarely emerge at the same time or grow at the same rate so application timing should be determined by the growth of the dominant weed species for the field situation.  In most instances this will be fat-hen as it, and other tall weeds, have the capacity to inflict serious yield penalties on sugar beet if left uncontrolled.  Conviso One should be applied before fat-hen reaches four true leaves.

There is a wide range of crops that can be sown following a crop of sugar beet that has received the Conviso One herbicide. In order to minimise the risk of crop damage from the residual effects of thiencarbazone, the active substance with lasting residual effect, there are however, several principles of good crop management that should be observed.

Best practice requires that ahead of all following crops the land should be mouldboard ploughed to a depth of at least 20 cm (8 inches) prior to sowing or planting.  Where a beet crop fails or is abandoned, it is advisable to allow a month to elapse before re-sowing with a maize crop, even after ploughing.

It is expected that those intending to establish a crop in the same calendar year as the beet crop was sown will drill winter wheat as there are few alternatives that can be sown late in to the autumn and winter and be expected to deliver a respectable performance.

In the year after application, the following crops may be sown:

Although not on the label as approved for sowing after use of the Conviso One herbicide, trials conducted by Bayer have found the following crops can be grown as part of a balanced rotation:

If groundkeepers are found in the following crop, treat with a hormone herbicide such as MCPA and 2,4-D as these have been found to be effective against ALS-tolerant sugar beet.

Good record-keeping and a zero-tolerance approach to bolter management will be essential to preserving the Conviso Smart system for the long-term.

All growers will be asked to demonstrate the principles of good crop management:

At sowing clean out the seed drill between changing between Conviso Smart and conventional varieties.  Always record which fields are sown with Conviso Smart varieties and where possible clearly mark the field so as to ensure employees and contractors are aware that the field contains a variety tolerant to ALS herbicides.  Ensure the sprayer is thoroughly cleaned out before moving to a crop not tolerant to ALS herbicides.

Choose varieties suitable for the intended drilling timing and sow at a time appropriate to the variety and the field.  Adopt a zero-tolerance approach to bolters and plan to ensure all bolters are removed. A list of gang workers operating in your area is available from the British Sugar online portal. Effective bolter management often requires going through the crop several times to ensure full control.

Stewardship guidelines for manual workers hand-pulling bolters and weed beet can be found on the Bayer website here.

Adhering to the principles of good crop management is central to ensuring target weeds do not develop resistance to the ALS active substances contained in Conviso One. These principles apply across the whole rotation.

Where necessary consider using conventional chemistry in sequence with Conviso One to ensure effective weed control.  In situations where lower levels of efficacy are observed investigate the possible causes. If an area of weeds survive application and resistance is suspected, consider spraying-off the area with a non-selective herbicide.