Betanal Tandem is a broad-spectrum post-emergence herbicide providing mainly contact and some residual control of some later germinating weeds in sugar beet, fodder beet and mangels. Formulated as a suspension concentrate, it contains two highly effective active substances for the control of a range of annual broad-leaved weeds. 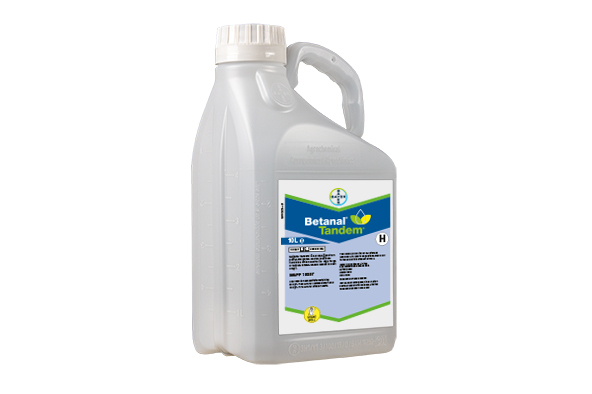 Learn about the benefits of Betanal Tandem

A mainly contact-acting herbicide that, in a planned programme and in moist soil conditions, will provide residual activity of some later germinating weeds. Applied as a post-emergence spray it control a range of broad-leaved weeds in sugar beet, fodder beet and mangals.

The maximum total dose must not exceed 1.0 kg of ethofumesate per hectare in any three-year period.

Next
Why you need Betanal Tandem

Why you need Betanal Tandem

For best results, the largest weeds should not be beyond the fully expanded cotyledon stage at spraying.

* under difficult conditions, improved control of these weeds will be obtained by using the tank mixture with Goltix 70 SC.

Betanal Tandem may be used on all soil types.  On soils with more than 5% organic matter content residual activity may be reduced.

Avoid drift to areas outside those being sprayed, having due regard to the prevailing weather conditions and spray quality being used.  The risk of drift is greater when a FINE quality spray, as recommended for this product, is used.

The first Betanal Tandem low-volume application should be made when the majority of crop plants have reached the fully expanded cotyledon stage.

The earliest germinating weeds should not be larger than the fully expanded cotyledon stage at the time of spraying. This is essential on organic soils, and on mineral soils where a pre-emergence treatment has not been applied. Further Betanal Tandem low-volume sprays must be applied as each new flush of weeds reaches the cotyledon stage.

On mineral soils, where a pre-emergence spray has been used, the first Betanal Tandem low-volume spray may be delayed until the first flush of weeds reaches cotyledon stage.  Any early germinating susceptible weeds which are slightly larger at this time may not be killed by the first treatment.  They will usually be checked and then controlled by later applications.

Where a pre-emergence treatment has been applied as a band spray, it will be necessary to time the first post-emergence Betanal Tandem low-volume treatment according to the size of weeds present between the rows where there is no pre-emergence effect.

Successful results from a low-volume programme are achieved by applying each spray when the previous one is still showing an effect on the weeds.

A minimum of 5 days must elapse between treatments.

When herbicides with the same mode of action are used repeatedly over several years in the same field, selection of resistant biotypes can take place. These can propagate and may become dominating. A weed species is considered to be resistant to a herbicide if it survives a correctly applied treatment at the recommended dose.

Strains of some annual grasses (e.g. black-grass, wild-oats and Italian rye-grass) have developed resistance to herbicides, which may lead to poor control.

A strategy for preventing and managing such resistance should be adopted. This should include integrating herbicides with a programme of cultural control measures. The latest guidance is available from the Weed Resistance Action Group (WRAG).

Populations of black-grass and Italian rye-grass with high levels of enhanced metabolism resistance may not be fully controlled.