Artist is a powerful residual herbicide designed to give you effective pre-emergence control over a wide range of grass and broad-leaved weeds in early and main crop varieties of potatoes including seed potatoes. 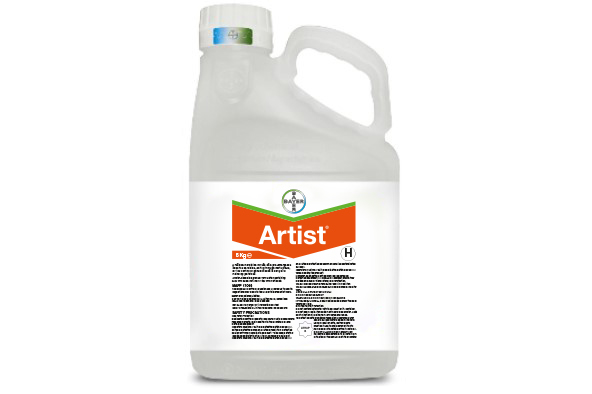 Learn about the benefits of Artist

A residual herbicide for use as a pre-emergence selective herbicide, acting through root uptake, for the control of annual weeds in early and maincrop potatoes.

Do not apply by hand-held equipment

Do not treat crops grown on sands. The maximum residue level for flufenacet is 0.15 mg/kg and must not be exceeded.

Next
Why you need Artist

Why you need Artist

The following annual weeds are listed on the product label as being controlled by a pre-emergence application of Artist:

* When applied for control of other weeds, evidence shows that Artist also has activity against black-grass and Italian rye-grass.

Trials have also shown activity against:

Artist does not control perennial weeds. In situations where potatoes follow grass an autumn herbicide treatment or cultivations should be used to kill out the sward. Shoots appearing from any surviving turfs may be controlled post-planting, but before crop emergence, using a suitable approved contact herbicide.

The following potato varieties may be treated with Artist before crop emergence:

All commercially available varieties may be treated, except those grown on sands

All commercially available varieties except Fambo and crops grown on sands. Do not treat Shepody grown on sands or very light soils.

All commercially available varieties except crops grown on sands. Do NOT treat Maris Piper or Sante grown on ‘Sands’ or ‘Very Light Soils’ (ADAS ‘85 Classification). For crop safety information on specific potato varieties please contact Bayer CropScience Limited on 0808 1969522, or your Artist distributor.

For optimal weed control soils must be sufficiently moist at or shortly after application to ensure adequate uptake of active substance via the roots of germinating weed seedlings. Effectiveness will be reduced under dry soil conditions.

Ridges should be well rounded  with few clods. Cultivations should produce a soil tilth that requires no further improvement after planting. Cultivation after spraying will encourage weed germination and reduce the residual activity of Artist.

Ensure Artist is applied evenly overall to both sides of potato ridges. Care must be taken to ensure that application takes place before crop emergence.

Artist sprayed onto any part of the potato plant will cause crop damage; therefore, it is essential that application is made before there are any visible signs of potato shoots emerging from the soil.

On mineral soils with a high organic matter content and on peaty or organic soils the residual activity of Artist may be reduced. On stony or gravelly soils there is a risk of crop damage, especially if heavy rain falls soon after application.

Before drilling or planting any succeeding crop the soil must be mouldboard ploughed to a depth of at least 15 cm taking care to ensure that the furrow slice is inverted. Ploughing should be carried out as soon as possible (preferably within 3-4 weeks) after lifting the potato crop, but certainly no later than the end of December.

In the Same Calendar Year

Provided at least 16 weeks have elapsed after the application of the recommended rate of Artist, cereals or winter beans may be grown.

In West Cornwall, on soils with more than 5% organic matter, early potatoes which have been treated with the recommended rate of Artist may be followed  by summer planted brassica crops provided that at least 14 weeks have elapsed from spraying, spring rainfall was normal, and that mouldboard ploughing takes place after potato lifting and before drilling or transplanting the brassica crop.

In the Following Calendar Year

Do not grow any vegetable brassica crop (including cauliflowers, calabrese, Brussels sprouts and cabbages) on silt soils in Lincolnshire, or lettuce and radish crops anywhere in the UK, on land treated with Artist in the previous year. Any other crop may be grown from spring onwards in the calendar year following use of Artist.

This Extension of Authorisation relates to the use of Artist as a herbicide for the control of black bindweed in soya.

Applications must be made via conventional hydraulic sprayer as a direct spray prior to the crops emergence in a minimum water volume of 200 litres water per hectare.

Applications must not be made via hand held equipment.

Neither the efficacy nor the phytotoxicity of the product for which this extension of authorisation has been granted has been assessed and, as such, the user bears the risk in respect of failures concerning its efficacy and phytotoxicity.

When herbicides with the same mode of action are used repeatedly over several years in the same field, selection of resistant biotypes can take place. These can propagate and may become dominating. A weed species is considered to be resistant to a herbicide if it survives a correctly applied treatment at the recommended dose.

Strains of some annual grasses (e.g. black-grass, wild-oats and Italian rye-grass) have developed resistance to herbicides, which may lead to poor control.

A strategy for preventing and managing such resistance should be adopted. This should include integrating herbicides with a programme of cultural control measures. The latest guidance is available from the Weed Resistance Action Group (WRAG).

Populations of black-grass and Italian rye-grass with high levels of enhanced metabolism resistance will not be fully controlled.