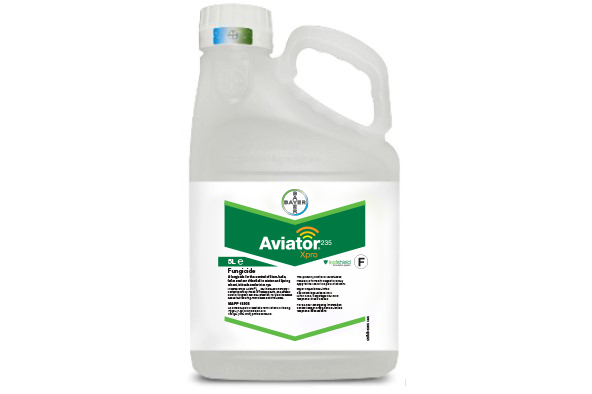 About Aviator 235Xpro in wheat

Further reading about the benefits of Aviator 235Xpro

What is the aim of a T1 fungicide?

What is the aim of a T1 fungicide?

The primary goal when applying a T1 fungicide is to control Septoria on the recently emerged final leaf 3 and leaf 4 at GS 31-32.

Timing is critical, with T1 sprays applied too early usually resulting in poor disease control on the emerging leaf 3 due to a lack of coverage on the leaf that emerges after application.

Optimum performance from T1 applications is seen after a T0 spray, typically applied two to four weeks before T1.

When T1 applications are applied too late, leaf 3 is exposed to infection risk for longer. This requires any fungicide to work harder to control latent Septoria when it is eventually applied and can have a negative impact on product efficacy.

The effect of timing was shown in NIAB and Velcourt trials which compared Proline + chlorothalonil with Aviator. Each was applied at a standard T1 timing following a T0 or after a five-day delay. Both sets of treatments were also applied where no T0 was applied.

Although yield response steadily decreased as the situation became more curative for both treatments, Aviator offered a significant yield benefit over Proline + CTL at every stage except when timing was spot on.

Any rust and mildew present at T1 should be adequately controlled by Septoria-active fungicide products, but adding specific rust-controlling products to the sprayer tank may be required in a high pressure scenario.

T1 is also a key time to assess and reduce risk of stem-base diseases such as eyespot, Fusarium and Microdochium inoculum taking hold. Where risk is high, a product with good activity against these diseases should be considered.

Next
How to identify leaf 3 emergence in winter wheat

How to identify leaf 3 emergence in winter wheat

Richard Cromie, an independent agronomist, talks through how to identify the emergence of leaf 3 in wheat which is critical for the accurate application of T1's.

How to get the best out of T1 fungicides in wheat

This video gives advice on how to get the best out of using a T1 fungicide to control disease in wheat. Also, how to pinpoint the correct timing for T1, and what types of fungicide to use in different situations.

Next
Choosing the best azole at T1

Choosing the best azole at T1

The curative efficacy of azoles including prothioconazole and epoxiconazole slipped around 2012 as the incidence of more insensitive isolates in the UK population increased. However, since then prothioconazole has stabilised relative to other azoles, and for the first time it is now clearly pulling apart from epoxiconazole in performance against Septoria.

ADAS trials, looking at a two-spray azole programme at T1 and T2 using prothioconazole, epoxiconazole or metconazole in 2016 highlighted its superiority. An application of Proline at 0.58 L/ha – the same dose as in 1.0 L/ha of Aviator or 1.2 L/ha of Ascra – gave a respectable 55% control of Septoria and a 1.0 t/ha uplift in yield. While the other azole products used in the trial – Rubric and Caramba – performed relatively well, prothioconazole gave a consistently higher level of Septoria control at low, medium and high rates. As a result, when epoxiconazole or metconazole are used in SDHI co-formulations such as Adexar and Librax, the SDHI component is working much harder than the azole to control Septoria. This added activity provided by prothioconazole is extremely valuable for the other actives in terms of resistance management.

In addition, prothioconazole is tried and tested on eyespot and when combined with bixafen in Aviator is boosted to control levels that supersede Tracker – widely seen as the go-to product in high eyespot risk situations at T1.

Fusarium, mildew and yellow rust can also threaten at T1 and although Aviator is still a good T2 option, its 80% dose of prothioconazole makes it a logical choice at T1 because of its strength on all those diseases.

Where disease pressure is higher, spot-on T1 timing cannot be guaranteed, or the T1 has been delayed, extra Septoria curative activity will be required and the addition of SDHI bixafen in Aviator 235Xpro will boost control, while also giving a physiological boost through crop greening.

Aviator 235Xpro is also formulated with Leafshield technology, which uses a unique combination of adjuvants to improve crop coverage, leaf penetration and movement of the active ingredients within the cereal leaf.

While declining azole activity against Septoria has been well documented, primary azole prothioconazole still provides good control of the disease – particularly when applied in a protectant situation with multisite CTL.

About Aviator 235Xpro in oilseed rape

Further reading about the benefits of Aviator 235Xpro in oilseed rape

For best results, Aviator is recommended at 0.75 L/ha in 200 L/ha of water at early- to mid-flowering, for around three weeks of protection.

At the recommended 0.75 L/ha rate, Aviator delivers approximately the same amount of prothioconazole as Proline at 0.46 L/ha, but with the added benefits to disease control and crop physiology from the SDHI bixafen.

Next
Tried and tested in farmer trials

Tried and tested in farmer trials

In 2019, 10 Judge For Yourself farmers trialled Aviator against their farm standard flowering spray. Aviator outperformed the farm standard in all 10 trials, with the greatest yield benefit being 0.4 t/ha.

Andrew Williamson was one of the Judge For Yourself growers who took part in the trial. His trial compared Aviator against his farm standard Filan paired with azoxystrobin.

“The result was positive for Aviator,” he says. “We gained 0.2 t/ha above the farm standard programme. Financially that’s quite a big gain. On the current prices of oilseed rape, it equates to roughly £70/ha in favour of using Aviator.”

Aviator benefits from the patented Leafshield formulation system, helping both active ingredients simultaneously attack diseases on and inside the leaf.

Leafshield also promotes the spreading and drying of actives, which is particularly notable on the waxy leaves of oilseed rape, as demonstrated by a study from Silsoe Spray Application Unit.

The study found that Aviator spread the quickest and covered the greatest surface area of all the trialled products – demonstrating how the Leafshield formulation helps you maximise Aviator’s performance. 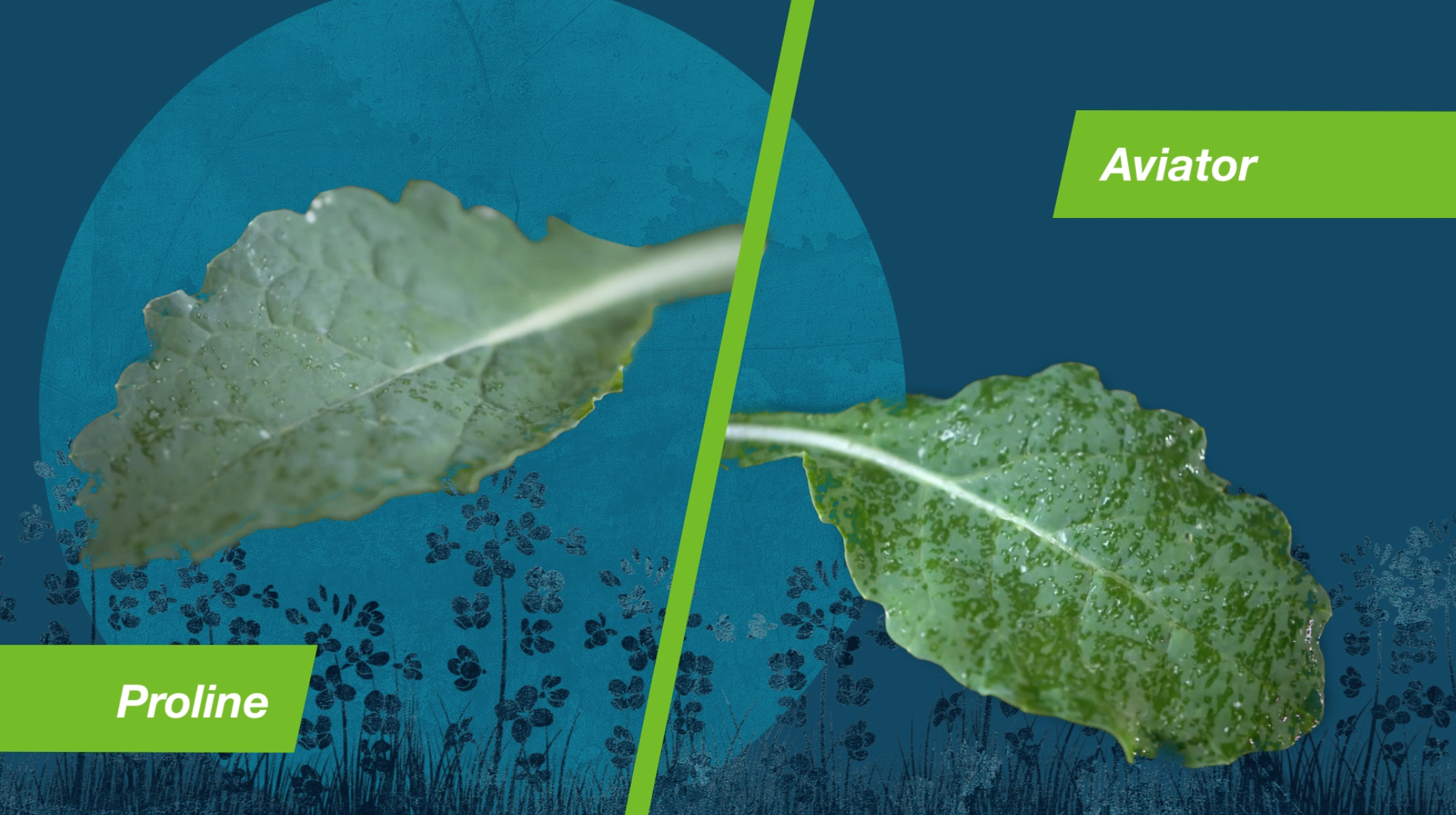