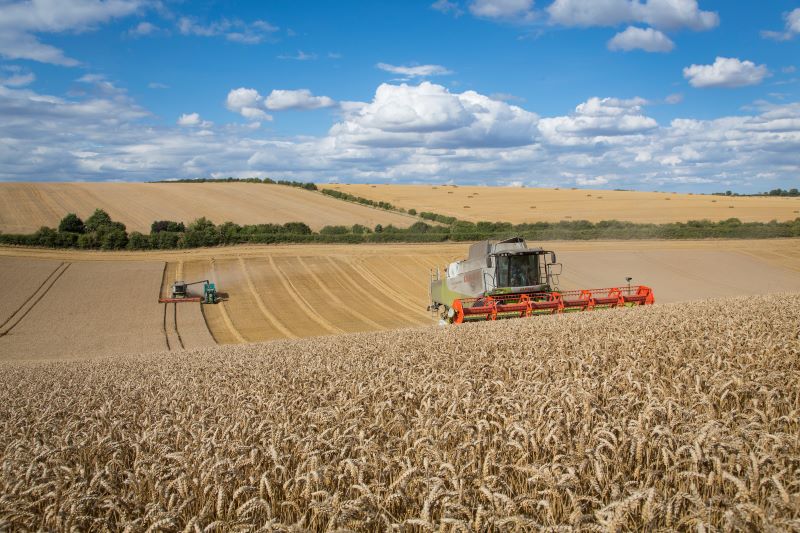 Feedback from growers I’ve spoken to in south Lincolnshire has been that winter barley yields have been average to slightly above average, but the quality hasn’t been that great, with quite a lot of shrivelled grains.

Oilseed rape, as always, is a bit of a mixed bag, but generally there seems to be a bit more positivity – at least compared to previous years – and the price, as it is generally across the cereal crops, is very favourable at the moment, which is helpful.

Reports from early wheats is similar to the barley with yields average to above average but the quality might not be there, especially specific weights. There is still quite a lot of wheat to cut around here as this is written.

1. Look for moisture if you decide to drill OSR in September

As one of the old stomping grounds of the old wheat, oilseed rape rotation, the East Midlands used to grow a huge amount of oilseed rape. But when you drive around now in May there are a lot less fields of yellow than there were five years ago.

For the coming season a lot of growers were waiting to see not only how the smaller amount of oilseed rape in the ground this year performed – and I think most were reasonably happy – but also yield from other break crops to see decide whether to go back into oilseed rape in a bigger way this season.

Most will have made that decision in early August, and where they have drilled oilseed rape at that time, so far, as I write, it looks pretty good as there was moisture around to help get it away.

While I can’t see too much more going in in September, if we get a decent amount of rain and moisture in the soil then that’s what would be needed for a late flurry of activity. Last year showed that later drilled oilseed rape could be successful with 85% of crops drilled after 21 August being taken through to harvest in our second national oilseed rape survey, in conjunction with ADAS. That compares to just 55% the previous season.

If you do take advantage of any late opportunity remember there is extra support through the Dekalb OSR Establishment scheme. This means if you drill any of DK Exstar, DK Extremus, DK Excited or DK Imprint CL before 20 September and register through your seed supplier by the end of the month, there is a £100/bag credit on any area above 6ha which fails to establish. Claims need to be made before the end of October.

All of those varieties have been chosen because of their good autumn development characteristics, and will be worth a look if the conditions come good.

2. Use a stale seedbed to get weed control off to the best start

Getting best possible grassweed control starts with understanding what your problem is – so hopefully growers will have used that pre-harvest period to walk fields and map where potential issues have arisen. Climate FieldView is a useful tool that can help with that – geomapping specific locations to highlight areas of problem weeds, which can be shared with your agronomist and used to target control practices.

Where possible a stale seedbed is a great start to the season’s weed control programme. If you have Bromus species – meadow, rye or soft brome – then the seeds usually require a period on the surface before cultivating to make sure they do not go dormant and come up in crop. A month is typically advised before cultivating to help encourage a chit.

With Anisantha species of brome, black-grass and ryegrass cultivations directly after harvest are more likely to encourage germination.

All our research suggests that best control comes from two applications of Roundup (glyphosate) to the stubble if you have the opportunity. Grassweeds should ideally be at 2-3 true leaf stage at application, but avoid any application on surviving weeds – use cultivation to mechanically control any survivors.

3. If drilling wheat in September be aware of knock-on challenges

Undoubtedly there will be growers who will want to be drilling wheat in September after the scars inflicted by the last two autumns, but especially 2019. Our recommendation for best grassweed control is to delay drilling as far as you can go, but if fields are cleared and there is a manageable workload, hopefully not in the worst grassweed situation, it will be difficult to persuade growers not to drill to get the highest potential for their crop.

If you do drill in September that does have a knock-on impact – higher likelihood of higher grassweed pressure, and also of disease inoculum build-up as the crop develops in the spring.

For grassweed control, after stale seedbeds, the next step will be pre-emergence herbicides. There was good feedback from growers who tried Proclus (aclonifen) + Liberator (flufenacet + diflufenican) last autumn. Used at 1.4 L/ha of Proclus + 0.6 L/ha Liberator it will give you best control of grassweeds – around 10-15% better than Liberator alone on black-grass, and in some trials up to 30-40% better control of ryegrass, on which it is especially strong.

Proclus must be used pre-emergence and in wheat only, and is best applied within 48 hours of drilling. Apply to a fine, firm seedbed ideally, as it creates a homogenous film across the seedbed, which is picked up by the shoots of emerging grassweeds. Drilling seed to a depth of around 32mm, and applying within a water volume of 200 L/ha in a medium spray will also get the best out of Liberator + Proclus mixes.

When filling the sprayer, always start with a clean sprayer, match nozzle sizes and inline filters to spray quality and avoid too fine meshes that could block. The usual best practices of shaking the can well before use and start agitating the sprayer before adding the Proclus, and continuing with agitation until the load is sprayed are also important to follow.