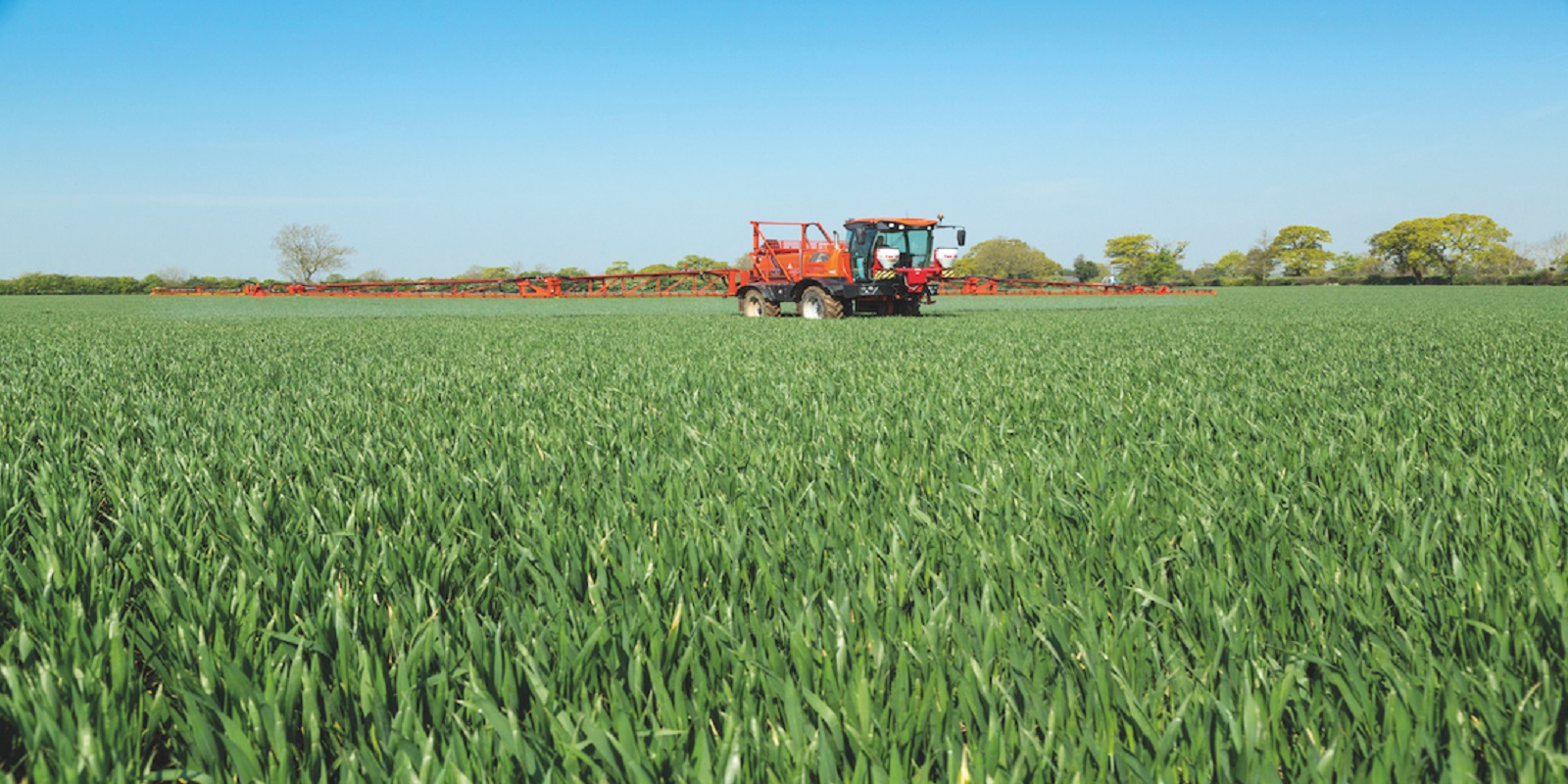 Which wheat fungicides perform best has long been a source of much discussion. When Aviator Xpro (bixafen + prothioconazole) was launched in 2011, Bayer pioneered its Judge for Yourself grower field-scale strip trials to test it versus then standard approaches, and in more recent seasons has continued that approach with the more recent introduction of Ascra Xpro (bixafen + fluopyram + prothioconazole).

The resulting data from those trials shows an average yield increase of 0.23 t/ha for Ascra over the standard farm treatments over three relatively low disease, but challenging years. 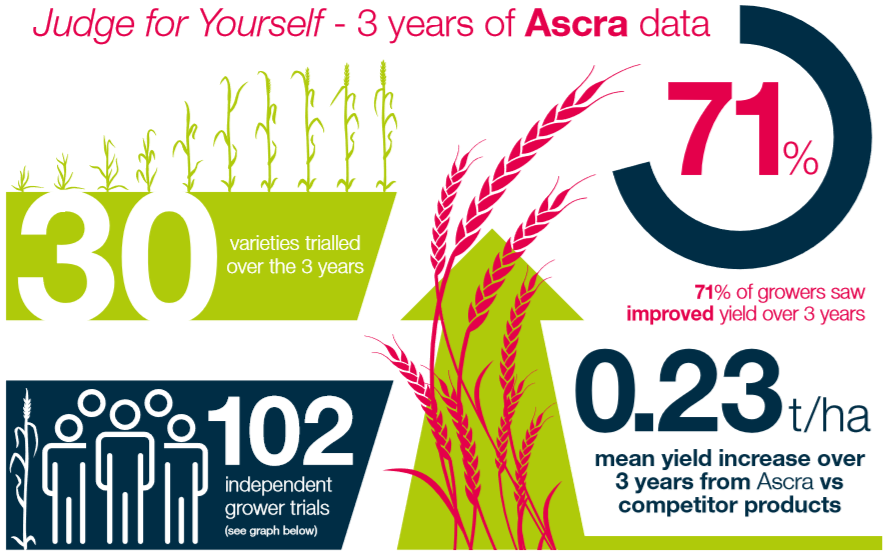 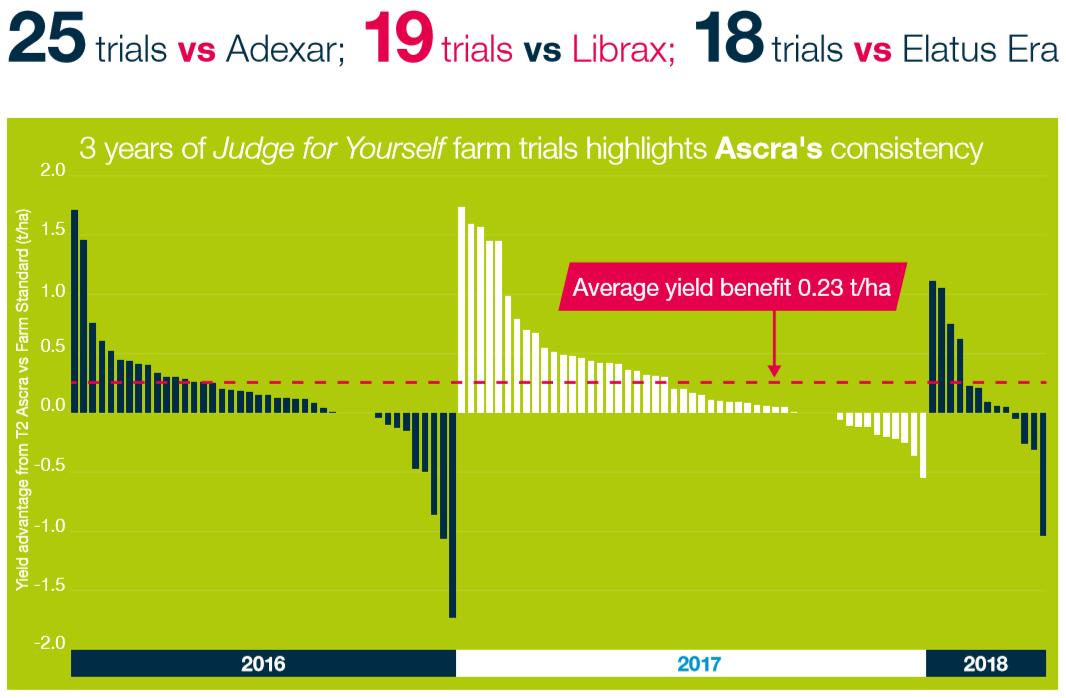 Cereal fungicide campaign manager Will Charlton says: “The trend each year has been around 70% positive yield comparisons for Ascra over the farm standards – we put emphasis on that trend rather than the results from individual trials because of factors such as field variation, soil type and black-grass.”

Despite variable seasons, the consistent yield improvement suggests Ascra’s yield benefit is coming from more than just excellent disease control. This has been backed up in the past two years with on-farm drone analysis recording positive green leaf retention in Ascra plots compared with farm standards.

Additionally, independent small plot work has recorded increases in root mass and density as well as higher water-use efficiency, leading to hardier plants that can withstand challenging seasons. These physiological benefits stem from superior disease control that leads to an increase in green leaf area at the critical time in June and July and from which the increased photosynthetic capacity and stress reduction allow the plant to build yield.

Fluopyram moves very quickly through the leaf delivering fast knockdown of disease, followed by bixafen and prothioconazole, which move through the leaf at the same time. Fluopyram also binds to the target site in a different way to bixafen, so it selects for a different mutation in Septoria, which means there is non-complete cross-resistance between fluopyram and bixafen. So isolates that confer a reduction in sensitivity to bixafen can still be sensitive to fluopyram and vice versa.

Mr Charlton explains: “The inclusion of prothioconazole – the best of the azoles against Septoria, plus control of a wide spectrum of diseases including fusarium, yellow rust and mildew – fills a lot of gaps that succinate dehydrogenase inhibitors don’t control so well.” The formulation delivers a higher rate of prothioconazole compared with other products, which as azole efficacy declines, helps back up the succinate dehydrogenase inhibitors and persist in the plant longer to keep disease out.

Mr Charlton cites the Leafshield formulation as another reason why growers find Ascra so consistent. “It has incredible spreading, penetration and sticking on the leaf, irrespective of nozzle choice, and is rainfast in minutes. It adds more than just grams of active in a can.”

How to get the best from Ascra

Three seasons of Judge for Yourself have shown unequivocal evidence that Ascra delivers improved margins for growers, further insight can be found on the Mark Means case study and the Russell McKenzie case study. See below as to how you can get the best from Ascra. 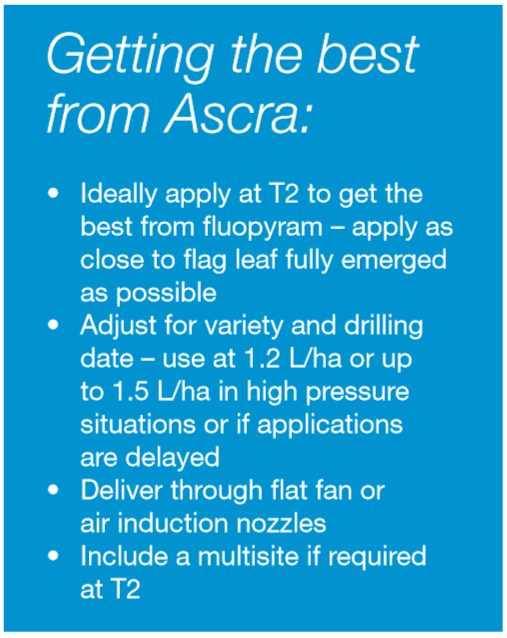