Velum Prime is a nematicide for use in potato and carrot crops. It is a liquid formulation and has no statutory harvest interval. Velum Prime is easier to use and has a significantly lower application rate than traditional granules.

In potatoes (ware, seed and salad crops),Velum Prime is effective against both species of potato cyst nematode (PCN), Globodera pallida and Globodera rostochiensis. In some soils with high organic matter, activity against G. pallida may be reduced.

Velum Prime can also be used for the reduction in spraing symptoms caused by Tobacco rattle virus transmitted by species of free-living nematodes. There is a risk that treated crops may still show symptoms of spraing and could be rejected by the processor. The extent to which spraing symptoms are expressed varies between varieties and this should be considered when selecting land for potato production.

In carrots, Velum Prime can be used for a reduction in fanging caused by free-living nematodes. 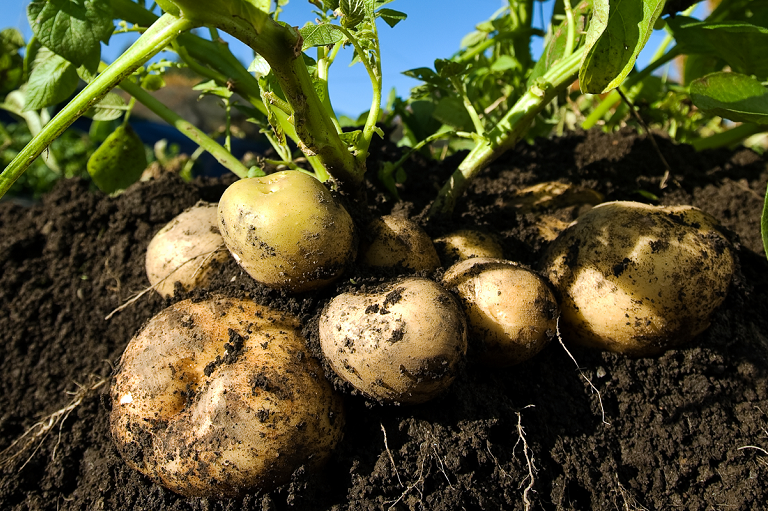 What is Velum Prime?

What is Velum Prime?

A liquid nematicide for potatoes and carrots. In potatoes it can be applied in-furrow at planting or as a broadcast spray to the soil surface and then incorporated to a minimum depth of 10 to 20 centimetres up to 72 hours before planting.

In carrots, Velum Prime can only be applied as a broadcast spray up to 72 hours before being incorporated to a minimum depth of 10 to 20 centimetres.

Next
Why you need Velum Prime

Why you need Velum Prime

The flexible way to manage nematodes

The central appeal of Velum Prime is the flexibility it brings to yield protection and population management. The absence of a restrictive maximum residue limit or harvest interval means Velum Prime can be used with all crop types, from long-season potatoes to short-season salads. Similarly, it can be used on all commercial varieties of carrot.

For carrots, the best protection has been achieved from a standalone application of Velum Prime.

Velum Prime also offers many practical advantages. It comes in easy-to-handle packaging and has a low application rate meaning there are fewer containers to handle and less waste to manage.

On every soil type, crop type and level of infestation across Great Britain, Velum Prime has been shown to be a valuable component of an integrated pest management strategy that will help protect land for the viable production of carrots and potatoes for the long-term.

Nematicides are an essential means of slowing the rate of population increase after harvest. Without a nematicide, the population, as measured in eggs per gram of soil, would be many times that recorded before the crop is planted.  Using a nematicide has the potential to see land brought back into production earlier than might otherwise be achievable.

Across 18 PCN trials conducted between 2015 and 2021, the average yield of crops treated with Velum Prime was 38.7t/ha, an increase of 6.0t/ha over the untreated. In the same trials, the yield protection afforded by Nemathorin 10G (fosthiazate) at 30 kg/ha was 7.9 t/ha.

The trials had an average Pi value of 37.6 eggs/gm of soil and the reduction achieved by Velum Prime is an average of results where it was applied either in-furrow at planting or as a broadcast spray ahead of planting.

The benefit of nematicides in managing PCN populations

It is for the grower to decide what level of yield protection is needed and how this may be best achieved in practice. In higher pressure situations, this may be best achieved by the use of Velum Prime in sequence with a granular nematicide. In lower pressure situations and as part of an integrated approach, Velum Prime applied alone may provide sufficient protection. Wherever possible, measures should be integrated with the use of resistant varieties and crops shown to reduce nematode multiplication.

The yield protection delivered by Velum Prime when applied alone and in sequence with Nemathorin 10G on sites selected specifically for their PCN higher pressure.

Velum Prime alone delivered an average yield increase over the untreated of 2.71 t/ha. When applied in sequence with Nemathorin 10G at half and full rate, the yield gain increased by 2.74 t/ha and 3.04 t/ha over Nemathorin 10G-alone respectively. 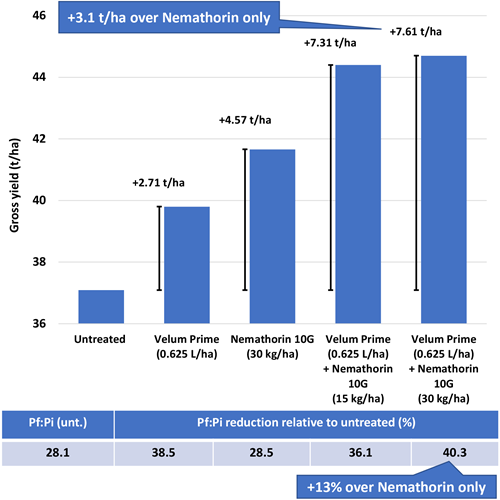 Pressure is often a subjective term. It will depend on field history, soil type, resistant status of the variety to be planted. 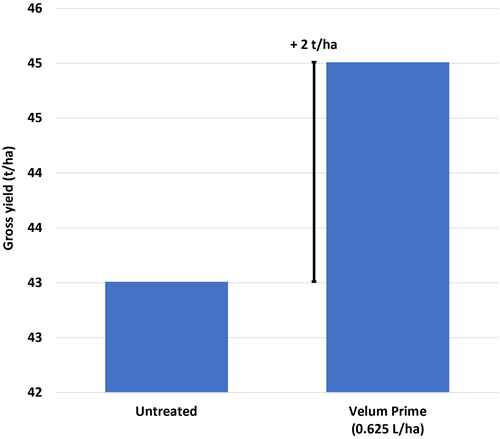 Across, 11 trials between 2013 and 2020 where pre-crop soil testing revealed a PCN population of 5 eggs per gram of soil or less, Velum Prime delivered an increase in the yield over untreated of 2t/ha.

Velum Prime can be used for the reduction in spraing symptoms caused by tobacco rattle virus vectored by certain species of free-living nematodes (FLN). Potato mop top virus, the other source of spraing infection is linked to the powdery scab fungus, Spongospora subterranea, will not be controlled.

There is a chance that treated crops may still express symptoms of spraing. As with PCN, Velum Prime should only be used against FLN as part of an integrated programme of measures. The reduction in spraing symptoms from the use of Velum Prime is broadly similar when applied as either a broadcast spray ahead of cultivations or in-furrow at the time of planting. 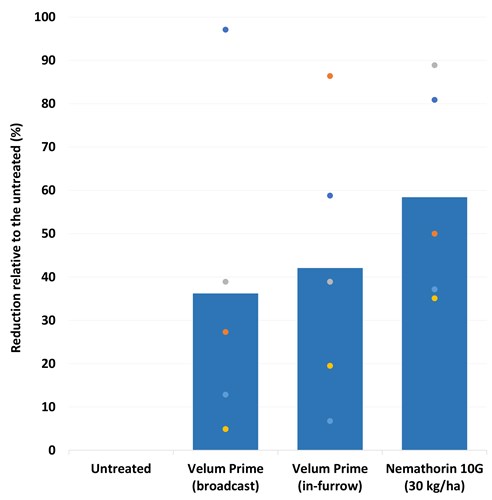 The FLN pressure in the five trials between 2015 and 2017 can be considered as ‘high’. The average number of Trichodorus species found in trials was 2279 per litre of soil. The soil types involved were sandy/silt loams and involved susceptible varieties, Lady Claire (1), Maris Piper (1) and Pentland Dell (3).

In carrots, as in potatoes, the use of nematicides is often essential to protecting yields in the face of pressure from parasitic nematodes. In carrots, the application of Velum Prime resulted in yields significantly higher than the untreated crops.

Across the same trials, crops treated with Velum Prime also had a lower incidence of fanging and other associated FLN symptoms. 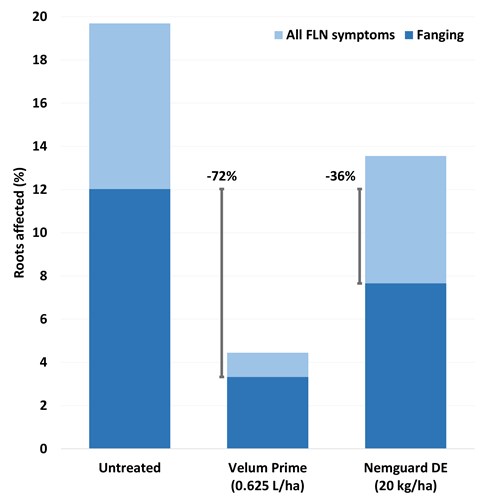 The use of Velum Prime in carrots was also observed to make an incidental contribution to the control of Sclerotinia.

In comparison, a conventional four-spray programme based on Signum (boscalid + pyraclostrobin) achieved a reduction of 52% relative to the untreated.

Velum Prime applications in carrots must not target Sclerotinia but any contribution to reduced sclerotinia incidence is to be welcomed. Where Velum Prime is applied it counts towards the total foliar SDHI fungicides applied to the crop which means the first foliar spray must belong to another mode of action group.

Velum Prime can be applied for the suppression of free-living nematodes associated with the transmission of tobacco rattle virus, one of the two causes of spraing. There is a chance that crops treated with Velum Prime may still show symptoms of spraing.

Velum Prime can be used for the suppression of plant parasitic nematodes and for the reduction of fanging caused by nematodes.

Under an extension of authorisation for minor use (EAMU) number 0288 of 2021, Velum Prime can be applied to parsnip crops for the control of free-living nematodes (Pratylenchus spp., Trichodorus spp., Paratrichodorus spp.).  The grower must be in possession of the EAMU before application to parsnip crops can be performed.

Important conditions for use in parsnip

Do not apply more than 250 g/ha fluopyram via soil treatment per calendar year.

Broadcast spray applications are restricted to potatoes once every three years and to carrots and parsnips once every two years.

Velum Prime can be applied by two methods.

Broadcast: Between February and June, Velum Prime can be applied as a broadcast spray up to a maximum of 72 hours before planting in 200-500 litres of water per hectare. It must then be incorporated to a depth of 10-20 centimetres. The broadcast spray can be applied either via a conventional boom sprayer or from an application system mounted to the same tractor as the tilling machine. It must be applied to the whole field ahead of cultivations or bed tilling.

In-Furrow: Velum Prime can also be applied as an in-furrow spray in 200-500 litres of water per hectare using on-planter application technology.  It is important to direct spray into the planting furrow and not onto the seed tuber. Application should be made using two nozzles per row; one at the front of the planting share and directed down into the furrow and the second at the rear of the share and directed so to spray the soil as it closes around the planted furrow.

If the crop is intended for processing consult the processor before use.

Apply Velum Prime as a broadcast spray between February and June up to a maximum of 72 hours prior to drilling in 250–500 litres of water per hectare.

It is essential that Velum Prime is thoroughly and evenly incorporated into the soil to a minimum depth of 10-20 centimetres, prior to drilling. Thorough incorporation of Velum Prime should be made by a rotavator or bed forming cultivation.

In situations where a de-stoned /de-clodded tilth is required, Velum Prime should always be applied to the de-stoned beds prior to bed-forming. Where front mounted sprayer systems are used, soil incorporation by the bed-former occurs immediately after application.

Where these systems are not available, Velum Prime will be applied to the de-stoned beds using a conventional boom sprayer, again in advance of the bed forming operation.

For crops drilled ‘on the flat’ (not de-stoned and not into beds) product application should be made by a conventional boom sprayer prior to power harrowing to a depth of 10–20 cm. Where a conventional boom sprayer has been used to apply the product to either the de-stoned beds or the flat soil surface, the soil incorporation must be made up to a maximum of 72-hours prior to drilling.

If the crop is intended for processing consult the processor before the use of Velum Prime.

Cardoons, celeries, Florence fennels and crops belonging to the category ‘other stem vegetables’ cannot be grown as succeeding crops.

Velum Prime may be used on all commercial varieties of potato, carrot and parsnip. While no additional data (crop safety and efficacy) has been provided, crops grown under plastic can be treated at the grower’s risk.

Velum Prime contains fluopyram (pyridinyl-ethyl-benzamide). As nematicides are not included in the mode of action classification scheme of IRAC, fluopyram is not assigned to any mode of action class by IRAC. However, fluopyram also controls certain plant pathogens and is classified by FRAC as a member of the Succinate-Dehydrogenase Inhibitor (SDHI) group of fungicides. A resistance management strategy in the crops where Velum Prime is applied also requires consideration of uses of other SDHIs for disease control.

Velum Prime contains an active substance with a new mode of action for use as a nematicide. The resistance risk in nematodes is considered to be low, based on experience of the use of organophosphates.

Where Velum Prime has been applied the first foliar fungicide application made to the crop must not be a member of the SDHI group.

An application of Velum Prime should count to one of the total foliar SDHIs applied to the crop.  The first fungicide applied after drilling must belong to a different mode of action group.  Velum Prime should not be used to target Sclerotinia.

Across 90 plots, Velum Prime delivered yield protection equal to that of full-rate Vydate 10G in a private trial run by Alan Bartlett and Sons

Get the best from Velum