What is Yellow Rust? 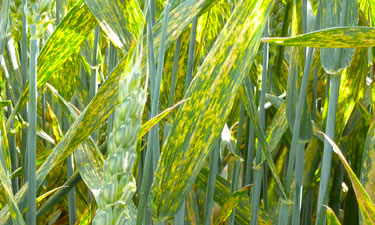 The ideal growth conditions for yellow rust are temperatures of between 8-13oC for spore germination and penetration, and 12-15oC for further development and with free water. This makes yellow rust more of a spring disease. It should be noted, however, that whilst young plants can be susceptible, as they mature, they can develop “adult plant resistance”. 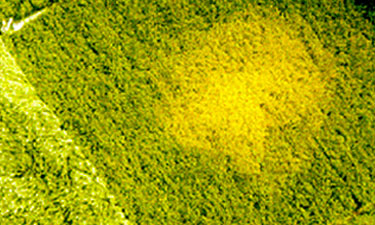 Yellow rust focus in a field

The optimum lifecycle for yellow rust is seven days, although symptom expression is more explosive than with brown rust, since the yellow rust fungus takes less time to build colonies of a size to support sporulation.

Yellow rust survives on late green tillers, volunteers and early sown crops. It originates as distinct ‘foci’ in crops and is spread long distances by wind.

The yield penalties from yellow rust in wheat can range from 5% to as high as 30% in high disease pressure scenarios (highly susceptible varieties in coastal regions/eastern counties). These penalties result from rust colonies in the leaf, draining carbohydrate from the plant and reducing green leaf area. Severe infections result in poor root growth and drought susceptibility

How to recognise yellow rust symptoms 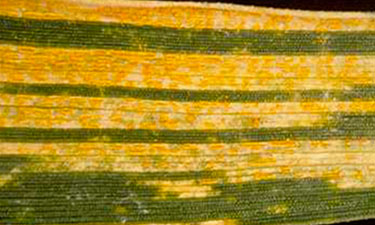 Close up of elongated colonies

The symptoms are symmetrical “stripe” lesions along the leaf, bearing orange-yellow pustules. These are located just underneath the upper leaf layer (epidermis), and are much less compact than brown rust pustules.

How to control yellow rust

Yellow rust is easier to control than brown rust with fungicides. This is because it forms its “looser” elongated pustules closer to the leaf surface, whereas brown rust forms very waxy dense pustules in the middle of the leaf, making it trickier for fungicides to access.

Yellow rust is eight times less efficient at penetrating the wheat leaf than brown rust, because it doesn’t build specialised infection structures (appressoria). This renders it an easier target for fungicides with long-lasting protectant activity.

It is recommended that you focus your foliar disease control programme on Septoria tritici and build in additive contingency plans for less predictable yellow rust.

Tebuconazole can offer useful knock-down activity on visible yellow rust as it is a fast moving azole. Rust active strobilurins such as fluoxastrobin are also useful in this scenario.

Yellow rust control is best started at T0 with a fast moving rust azole such as tebuconazole. This can then be followed with Proline275 or Aviator235Xpro at T1 and Aviator235Xpro or AscraXpro at T2, depending on timeliness and Septoria pressure at the point of application. Follow these simple guidelines as for Septoria control: