Hamlet is a post-emergence herbicide for controlling black-grass and other grass weeds in winter wheat crops during autumn / winter. It combines mesosulfuron, iodosulfuron and diflufenican in a powerful oil dispersion (OD) formulation that offers the best black-grass control available at this timing. 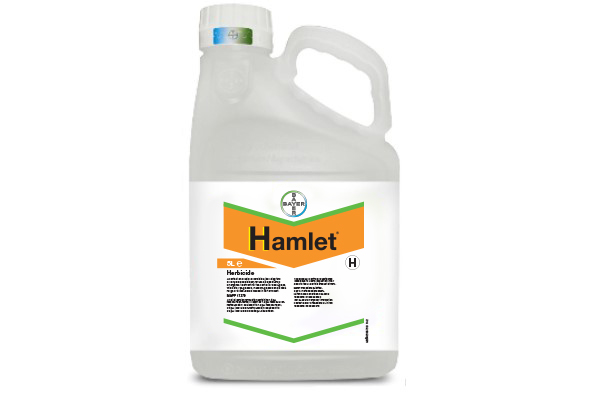 Further reading about the benefits of Hamlet

How soon should you apply Hamlet?

How soon should you apply Hamlet?

Gordon Anderson-Taylor, Bayer black-grass task force member is asked “How soon can I apply Hamlet?” Gordon points out that with increasing levels of EMR resistance around the country it is important to apply post-emergence herbicides as early as possible. In the case of Hamlet this means from 1 to 3 leaves of the black-grass and certainly before tillering. With such an early application there is always the potential of subsequent germination after treatment so Hamlet should be applied with both the adjuvant biopower as an effective residual partner to catch these late germinators. Traditionally 1 – 3 leaf stage of black-grass would be during the autumn, but with delayed drilling and heavy pre-emergence stacks now a key part of black-grass control programs the emergence of black-grass may be delayed. Hamlet should still be applied at the 1 – 3 leaf stage which may mean that application is later in the season, it may even be December, January or February. The key thing is to focus on the black-grass stage and avoid waiting until spring to treat large plants.

Next
Can Hamlet be used to treat resistant black-grass?

Can Hamlet be used to treat resistant black-grass?

Ben Coombs, Bayer black-grass task force member is asked “can Hamlet be used to treat resistant black-grass?” As Hamlet is based on the same chemistry as Atlantis WG (mesosulfuron and iodosulfuron) it’s not going to bust resistance wide open it does offer between 5 and 10 percent better black-grass control than Atlantis. The reason for this superior control is due to the addition of a third active (diflufenican) and the better formulation which Hamlet offers. Because most of the resistance seen in black-grass is EMR type resistance and Hamlet gives better control of these strains it will provide a useful tool help farmers deal with resistant populations.

Next
Should Hamlet be applied with a residual partner?

Should Hamlet be applied with a residual partner?

Darren Adkins, Bayer black-grass task force member is asked “Should Hamlet be applied with a residual partner?” Darren says that Hamlet, which should be applied in the autumn period, should be treated no different to any other contact acting herbicide. We would always recommend that it is tank-mixed with an effective residual partner such as pendimethalin or a flufenacet based product as this will help control later germinating grass-weeds.” For the latest details on tank mixes visit our document store.

Next
Best Nozzles to use for Hamlet

Best Nozzles to use for Hamlet

Next
What is Hamlet and why should I use it instead of Atlantis WG?

What is Hamlet and why should I use it instead of Atlantis WG?

Darren Adkins, Bayer black-grass task force member is asked “What is Hamlet and why should I use it instead of Atlantis WG?” Hamlet is a new post emergence treatment available from Bayer this autumn. Its based on the same chemistry as Atlantis (mesosulfuron and iodosulfuron) but also contains DFF and is in a liquid formulation. This means that Hamlet offers between 5 – 10 percent better black-grass control compared to Atlantis.

Agronomist David Kirkham saw a useful step up in grass weed control and a real boost for broad-leaved weed control when he made the conscious decision to switch from Atlantis to Hamlet.

South Lincolnshire farmer Mark Tinsley was satisfied with the result when he used Hamlet on the most challenging areas of black-grass in winter wheat last autumn.

When to use Hamlet for black-grass control?

Over several years’ trials, Bayer has found that Hamlet delivers the best control when applied to black-grass at 1-3 true leaves following a pre-em stack based on Liberator. Good control can be achieved with sprays throughout autumn and winter provided the target plant is small and spray conditions suitable.

Hitting black-grass and other grassweeds when the plant is still small is the key to success. Many populations have some degree of enhanced metabolism resistance – the ability to detoxify herbicides before they take effect so it’s much easier to overwhelm the defences of smaller plants. In short, hit them hard and hit them early with Hamlet.

How to use Hamlet?

Always use the biopower adjuvant.

Hamlet is a contact acting herbicide so the spray needs to land and stay on the target leaf; a fine-medium spray is the best way to achieve this. As Hamlet is such a crucial spray for the success of the crop, double check sprayer set up such as GPS calibration, boom height and blocked nozzles – any problem will translate into reduced control.

All applications should be made with a maximum forward speed of 12km / hour to maximise coverage and minimise drift.

Hamlet already has a strong package of contact action and residual control but there are options for growers concerned about late germinating weeds. The addition of a flufenacet product to complement the diflufenican is the best way to boost residual control. For full guidance on other products refer to the tank-mix sheet.

Hamlet’s active substances are not newcomers for weed control in wheat so the bad news is that there is already resistance lurking in black-grass and other weed populations. The good news is that control isn’t likely to fall away due to a rapid emergence of a new type of resistance so Hamlet will continue to provide control but it is still sensible to take steps to protect it.

Use Hamlet as part of a diverse control programme mixing chemical and cultural techniques. Weed control in crop is always a challenge so reduce weed populations as much as possible before crops go in the ground. If black-grass populations are very high, consider using spring crops to reduce numbers before bringing winter wheat back into the rotation.

Once you’ve made the decision to use Hamlet, apply it at the right time and apply it well to maximise efficacy and minimise resistance risks.

Using Hamlet also helps protect other actives in your control programme. Any survivor of a pre-em may carry a resistance risk so eliminating as many survivors as possible with Hamlet is a sound decision.

Why use Hamlet for grassweed control?

Even a full programme of cultural control followed by pre-emergence herbicides can leave some black-grass or rye-grass survivors. If left uncontrolled, these plants can tiller vigorously and return thousands of seed to cause a nuisance next season. The post-emergence timing is the last opportunity to control black-grass in the crop – apart from pulling it out by hand in May when it has already stolen yield.

Hamlet offers the best post-emergence black-grass control in winter wheat, bettering Atlantis WG by 10%. This may seem a relatively small amount but every nugget of control is important when fighting a weed as pernicious as black-grass. Each plant controlled this year means several hundred fewer seeds lying in wait next year. Control from Hamlet is also more consistent than with Atlantis WG even on resistant black-grass populations.