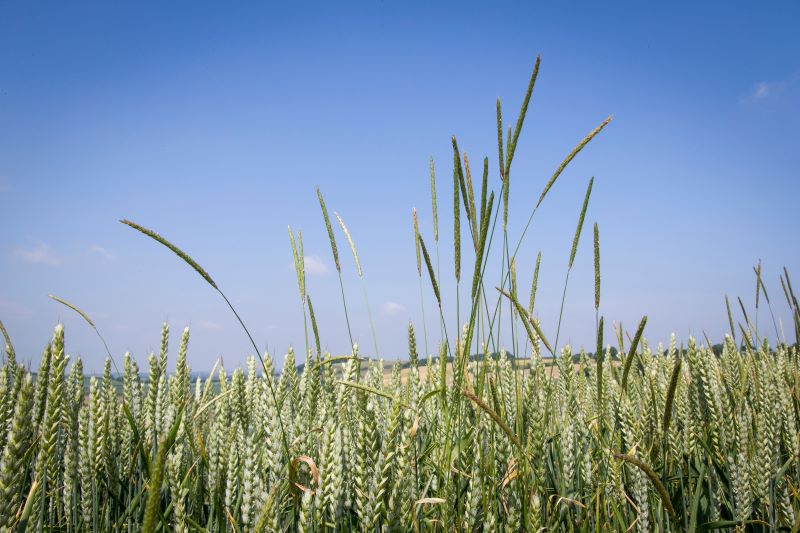 As we approached the last week of May, winter wheat crops in the East Midlands were a mixed bag. In later drilled crops after roots, T1 fungicides had only just been completed, while forward crops were being sprayed with T2 fungicides in the third week of May.

The dry and exceptionally cold weather through April reduced disease pressure, with yellow rust virtually disappearing, and Septoria hardly being seen above leaf five. But the rain through most of May and forecast warmer weather will mean monitoring crops carefully for disease as it reawakens.

Spring cereal crops are extremely variable, depending on moisture availability at drilling, while sugar beet crops also haven’t enjoyed the dry, cold and frosty weather. Most beet has now emerged but growth stages have been variable across the field. Potatoes have also been slow to emerge.

1. Finish off T2 sprays in wheat

Very unusually T2 sprays are likely to extend into early June in wheat crops in more than just the very late drilled crops, especially with an unsettled weather forecast until just before the late May bank holiday.

Fortunately, we had very low disease levels before the rain in May, and our latent disease testing hasn’t shown it appearing on the upper leaves three weeks into May despite the rain. I expect it will do, but the T2s in a lot of cases will go on in a protectant situation rather than a curative.

If the T1 and T2 gap has extended, then maybe a bit more curative might be required and where the newer products could fit, but for the majority of situations Ascra (bixafen + fluopyram + prothioconazole) at 1.0-1.2 L/ha will be perfectly adequate and a lot cheaper.

It will also give more rust protection than the newer options, initial Fusarium suppression and its rainfast in minutes which will be useful if this weather carries on.

Despite a delayed T2 in wheat, with the rain, crops taking up nitrogen and finally some warmer weather, ear sprays are likely to be hot on the heels of T2s – maybe only a fortnight later.

That might tempt some to delay the T3, but its primary focus is on controlling Fusarium and ear blights, as well as topping up foliar disease control, and the key for getting good control is correct timing of early to mid-flowering.

Where crops are on decent moisture-retentive soils, and didn’t get an SDHI at T1, Aviator (bixafen + prothioconazole) could be an option at T3 to keep the crop greener for an extra three or four days before senescence. If you can do that it should add extra yield, as we know crops put on around 0.1t/ha/day through keeping greener for longer.

Where spring barley was drilled into moisture in March, generally crops look decent and will be coming up to the awns emerging T2 timing in early to mid-June.

With the wetter weather it looks like more crops will be in a two-spray programme, but in spring barley the awns emerging spray is generally the more critical and responsive sprays for fungicides.

There have been some reports of net blotch and Rhynchosporium forming at the bottom of the canopy, which in warmer weather and left untreated could spread rapidly, while Ramularia is also a threat.

The general principle is to use a similar approach to winter barley but at slightly lower doses. Siltra (bixafen + prothioconazole) offers very good all-round disease control and exceptional rainfastness. If Ramularia is an issue, keep the dose of azole up to get maximum protection. There’s some uncertainty about the effectiveness of folpet against Ramularia, but it might give some extra protection at an additional cost.

Where there might be a more difficult decision to make is for spring cereals that missed the moisture window for drilling and are either very patchy in their emergence or not emerged at all.

Now is the time to decide whether to carry on with these crops, or cut losses and wither spray or cultivate the crop and start planning for the autumn. For spring cereals that are patchy and thin but also carrying high grassweed infestations this may be a hard decision to make, but will definitely reduce grass weed seed return and burden for the next crop.

Beet weed control is also going to extend into June with the slow growth. Care will be needed in product choice so as not to damage smaller plants in the field, while still controlling or at least checking weed growth.

For those growing Conviso herbicide tolerant varieties, the target for application of Conviso One (foramsulfuron + thiencarbazone-ethyl) is when weeds, such as fat hen reach 4 TL stage.

In July, monitor carefully for first signs of disease in sugar beet. Last season was particularly bad for Cercospora with ideal weather for its rapid spread in August. But don’t take your eye off the traditional diseases of rust and mildew, and look to apply Escolta (cyproconazole + trifloxystrobin) at the onset of disease.

Wet and relatively warm conditions in late May could start to favour blight conditions so crops should be monitored as soon as they start meeting along the rows.

Plan blight programmes carefully. Infinito (fluopicolide + propamocarb) gives good protection from both foliar and tuber blight and fits well into any programme from tuber initiation onwards, but make sure you leave yourself another applications of tuber blight-active products for later in the season.

For anyone growing varieties, such as Markies, that are susceptible to early blight (Alternaria solani), a new product from Bayer will be available this season in Caligula (prothioconazole + fluopyram). This should be useful as other options, such as Consento (fenamidone + propamocarb) are no longer available and a seeming shortage of mancozeb-containing products.

Oilseed rape crops continue to look much more promising than last year in general, and with a buoyant market price, there might be a bit of a resurgence for the crop this autumn.

Late frosts in April did cause some of the pods on the main raceme to abort, which looked a bit ugly, but oilseed rape has a strong ability to compensate and hopefully yield should not be affected.

As harvest approaches the key with Roundup (glyphosate) desiccation is to assess crop carefully and don’t go too early. Consider where the seed yield is carried in the canopy when sampling seed to check maturity, and follow the guidelines in the oilseed rape section here: https://cropscience.bayer.co.uk/our-products/roundup-hub/roundup-use-pre-harvest/

We’re looking forward to welcoming visitors again to our Field Days demonstration site near Long Sutton on 1 July. It’s been a long time since the last Field Day in 2019, so we hope to see you again then for a look around wheat variety plots, cereal fungicide trials, sugar beet herbicide trials and FieldView demonstrations and the obligatory burger or hot dog.

Or if you’re closer to Oxford, then a similar Field Day is being held on the 28th June.