Caligula provides protection against both species of early blight (Alternaria solani and Alternaria alternata) and has been shown to delay the onset of disease by up to six weeks. 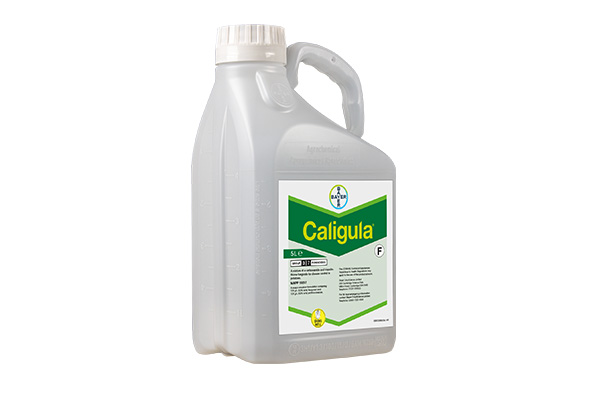 Further reading about the benefits of Caligula

Caligula is a liquid fungicide containing a mixture of carboxamide and triazolinthione systemic fungicide delivering preventative and curative activity against early blight.

A minimum interval of 10 days must be observed between applications. No more than two consecutive applications.

Next
Why you need Caligula

Why you need Caligula

The damage Alternaria inflicts on crops varies according to the season – measured losses in unprotected crops range enormously from 5 to 78% – depending on the extent of canopy defoliation. It is generally accepted, however, that the threat posed by the disease in becoming greater, not smaller.

There are several reasons for this escalation in pressure, such as the greater occurrence of favourable conditions during the early season and withdrawal of products that previously delivered effective protection.

Historically, growers were able to rely on products applied for late blight (Phytopthora infestans) to provide sufficient control of early blight, but this is no longer the case. This is in part due to the loss of co-formulated products such as those containing fenamidone, but the introduction of varieties with poor Alternaria resistance is a contributing factor.

A changing climate, especially the greater prevalence of mild and humid conditions in the late spring, has created favourable conditions for disease sporulation.

As the environmental conditions evolve to favour Alternaria spread, it has driven awareness of the damage it can inflict on crops and with it the need to ensure crops are properly protected. This is demonstrated by the increasing prevalence of A. solani strains demonstrating resistance to strobilurin fungicides. Conversely, early blight disease monitoring has found no evidence to suggest a shift in sensitivity to DMI triazolinthione fungicides, such as prothioconazole.

In trials, Caligula has delivered better disease control and yield protection than other products typically used against early blight. 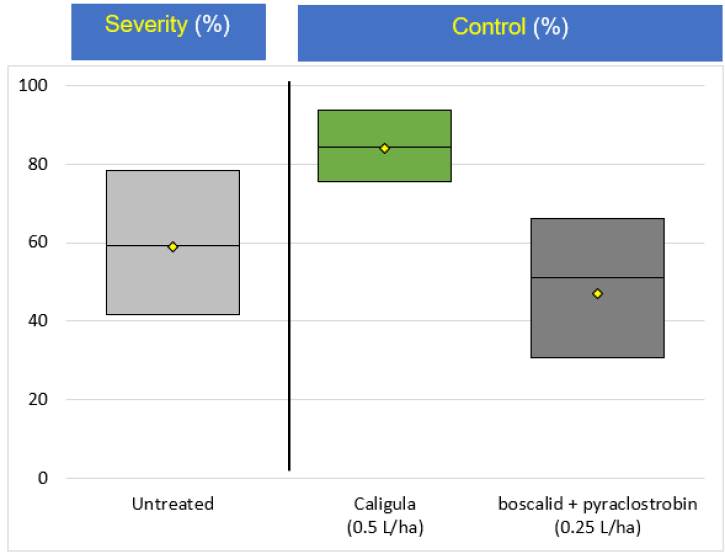 In this series of direct comparison trials, a preventive sequence of Caligula sprays at approx. 14-day intervals delivered 84% control of early blight in the susceptible phase of the crop, whereas a similar sequence with Signum (boscalid + pyraclostrobin) resulted in 47% control. 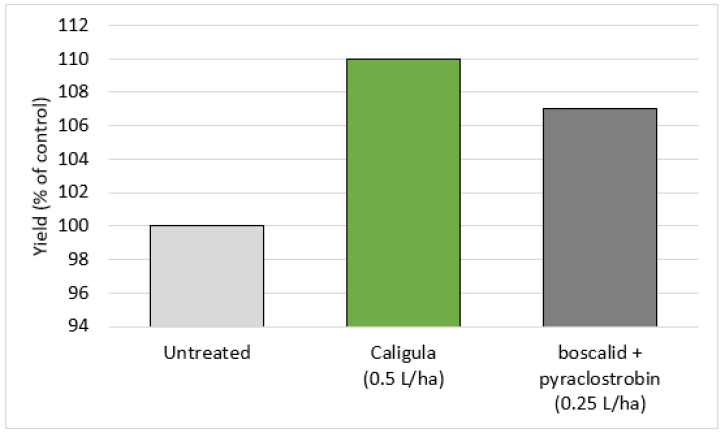 The Caligula strategy resulted in 10% mean yield benefit over the untreated, whereas the use of boscalid + pyraclostrobin strategy delivered only a 7% benefit in mean yield.

Similar performance was seen in trials with azoxystrobin. In this series of direct comparison trials, a preventive sequence of Caligula sprays at approx. 14-day intervals delivered 84% control of early blight in the susceptible phase of the crop, whereas a similar sequence with azoxystrobin resulted in 68% control. 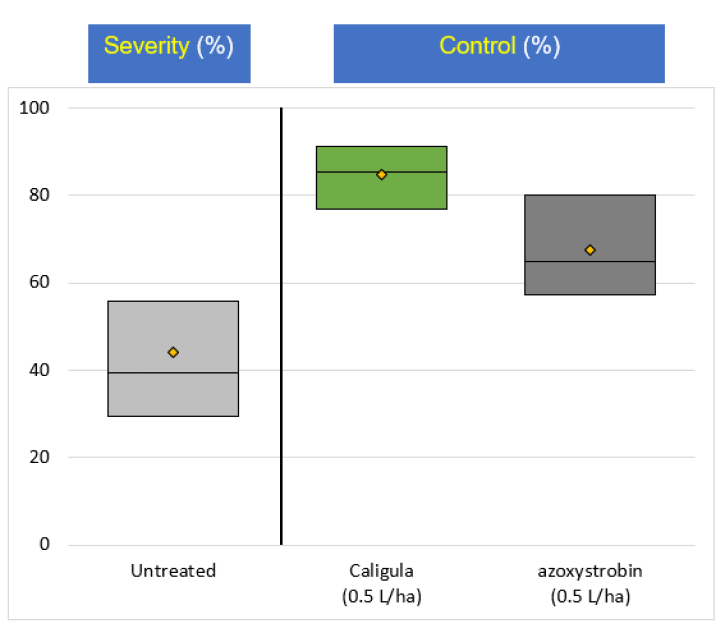 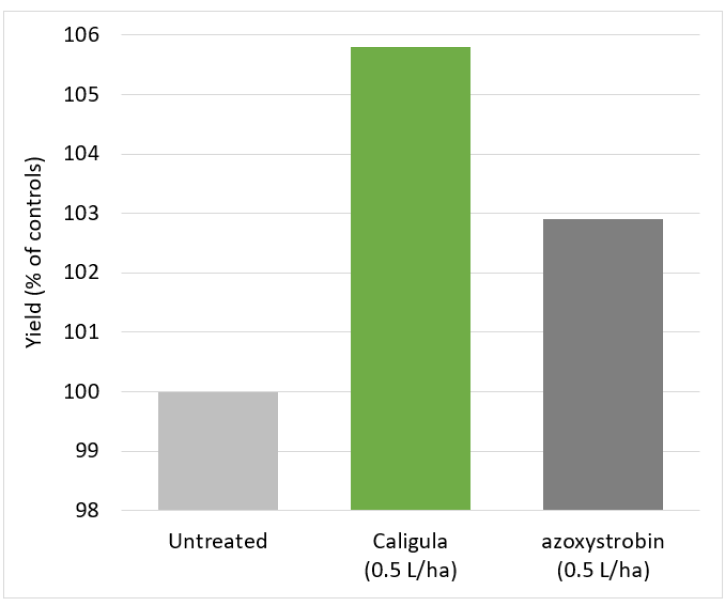 The superior control and yield protection benefits of Caligula was also seen in trials involving difenoconazole. Following the same protocol as in earlier trials, Caligula delivered 86% control of early blight is the susceptible phase of the crop, whereas a similar sequence with difenoconazole resulted in 80% of control. 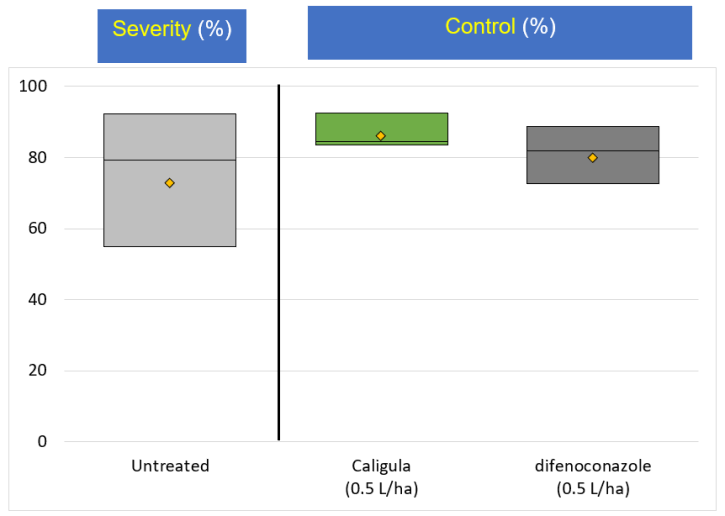 The Caligula strategy resulted in an 8% mean yield gain over the untreated, whereas the difenoconazole strategy gave a 5% yield gain. 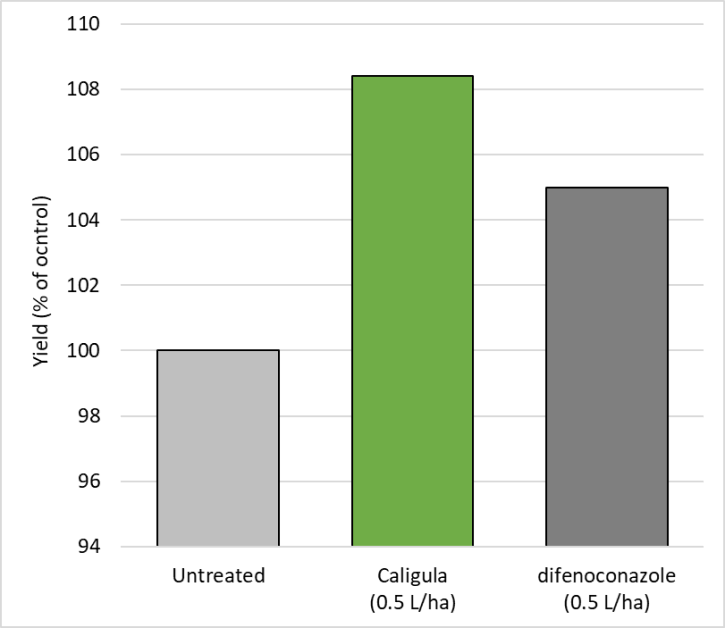 In trials performed to assess Caligula’s performance against early blight it was also found to deliver incidental control of Sclerotinia. 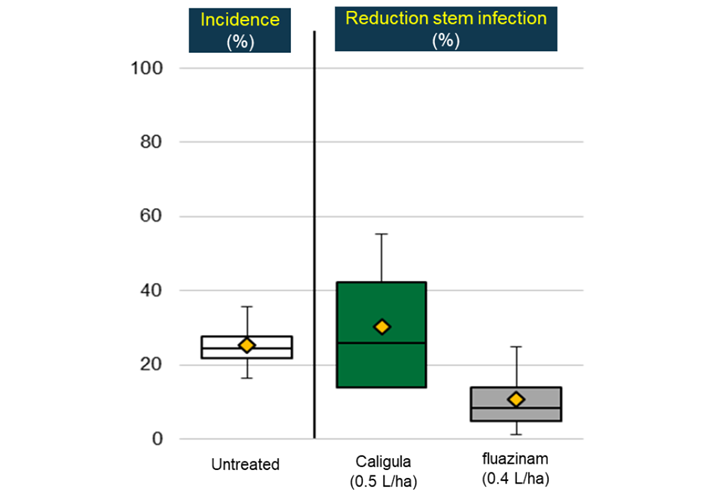 The Caligula sequence also resulted in a significantly lower incidence of Sclerotia within stems (94% control recorded in one trial), compared with a 40% reduction for fluazinam. 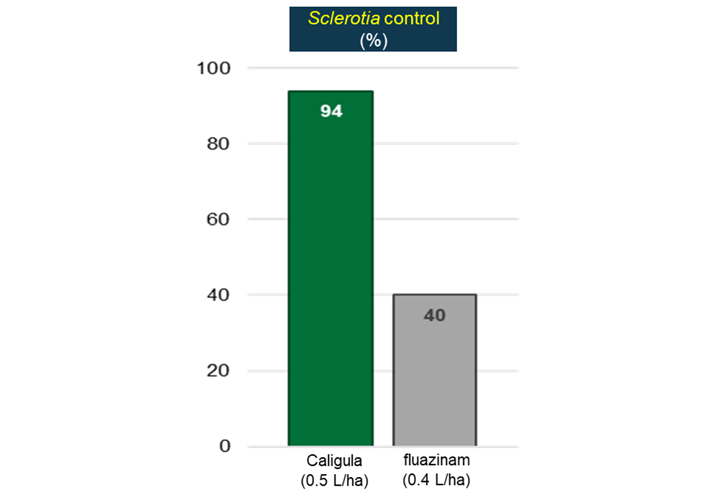 Next
How does Caligula work?

How does Caligula work?

Caligula is a co-formulation of fluopyram, an SDHI pyridinyl-ethyl-benzamides, and prothioconazole, a DMI triazolinthione, these active substances belong to different mode of action groups which is essential in promoting resistance management. The inclusion of fluopyram brings more effective action to control. Its higher structural flexibility compared with other SDHIs used for Alternaria control, ensures a better fit around the target site within the disease mitochondria.

Together, fluopyram and prothioconazole combine to protect leaves and stems through a combination of preventative and curative activity that is both contact and systemic.

de application.  From a safety perspective no-one should be handling crops that have just been sprayed.

Next
When and how to apply?

When and how to apply?

When used as part of a programme of correctly timed sprays, Caligula gives control of early blight caused by Alternaria species.

Caligula should be applied at the first signs of disease. Where diseases pressure remains high a repeat application should be made 10 days later. No more than two consecutive applications of Caligula may be made. No more than 500 g/ha of fluopyram via foliar treatment to be applied per calendar year.

Apply Caligula on to dry foliage. Do not apply if rain or irrigation is imminent. Caligula is rainfast in the times it takes to dry.

Apply Caligula in 200-300 L/ha of water. The higher spray volumes are recommended where the crop is dense, or disease pressure is high to ensure good penetration to the lower leaves and stem bases. Disease control may be compromised by reducing water volumes, where good spray coverage is difficult to achieve.

Caligula should be applied as a medium spray.

Caligula should be applied at 0.5 L/ha with a maximum total dose 1.5 L/ha.

Caligula may be used on all commercial varieties of potatoes and crops grown for seed.

Next
Go to document store