Roundup can be used pre-harvest of winter and spring cereals, (wheat, including Durum, barley and oats), oilseed rape, mustard, peas, field beans and linseed. Cereal crops for feed, milling and malt for brewing are included, but always consult the grain merchant before treating crops grown on contract and barley intended for malt or distilling.

Specific Off-Label Approvals for some other crops exist, for further information please check with the Chemicals Regulation Directorate.

Caution: Roundup should not be used on seed crops.

The presence of annual weeds in combinable crops at harvest can reduce combine efficiency, increase grain moisture and delay harvesting. To control perennial weeds the use of Roundup pre-harvest is particularly important as it usually results in more effective control than applications in the spring and does not delay subsequent field operations. Pre-harvest Roundup treatment gives more flexibility of cropping and more timely sowing in the autumn as well as easing the harvesting operation.

Using Roundup to control perennial weeds in the period immediately before harvest works particularly well because the weeds are actively growing and often at the most susceptible growth stage. The exception to this is in poor weather, such as drought, very wet or windy conditions, or if the weeds have started to die back. In these circumstances it may be better to treat the weeds in the stubbles.

Annual grasses are quickly killed, along with cereal leaves and stems at the harvest management rates.

Annual broad-leaved weeds remaining green in a ripe crop reduce combining speed and efficiency as well as raising the average moisture levels. As the speed of kill with glyphosate is much slower for broad-leaved weeds than grasses, it can take longer than the statutory harvest interval for Harvest Management rates to kill these weeds.

Some weeds take a particularly long time to die back, namely:

Where broad-leaved weed populations are very high or difficult weeds are present use the higher pre-harvest rates.

Once the crop reaches 30% moisture the application of low rates of Roundup can give harvesting benefits in the absence of weeds. It can facilitate a more timely harvest, achieve maximum combine efficiency, and allow better planning of farm workload.

By reducing moisture and evening up ripening it allows for:

At harvest even though cereal ears can show moisture levels of 16% the leaves and stems will have a much higher moisture level. During combining moisture will be transferred to the grain by condensation. Often grain moisture can rise to 19-20%. Roundup can reduce this effect.

Treated straw should not be used as horticultural growth medium or mulch, but can be safely used as animal bedding.

Mycotoxins are toxic chemicals produced by naturally occurring moulds and some plant pathogens. Concern about the presence of mycotoxins in European-produced grain led to the EU introduction of threshold levels for some mycotoxins. The British Food Standards Agency introduced EU standards of 1.250 ppm DON in unprocessed wheat grain and 0.75 ppm in grain and flour products in 2006.

Fusarium ear blight, (F.culmorum & F.graminearum), produces two of the most prevalent mycotoxins – nivalenol and deoxynivalenol, (DON). F.culomorum is the main cause of DON in the UK. Wheat crops following maize are most at risk, hence the problem is far worse in other parts of Europe and North America where maize is more often included in rotations and levels of F.graminearum are much higher. UK producers should be able to achieve EU standards with good fungicide management and timely harvesting, but a Harper Adams/HGCA 5 year study still found 3.5% of grain samples exceeded the DON limit.

The Food Standards Agency Code of Practice to reduce fusarium mycotoxins in Cereals, 2007, states: 'Grain should be harvested as soon as possible once ripe. The concentration of fusarium mycotoxins can increase if harvest is delayed due to wet weather. It is important that preparations are made for harvest to ensure delays are minimised'.

Wet conditions at flowering encourage development of fusarium, so T3 fungicide choices should be made according to risk. Discuss T3 fungicide options with your agronomist.

Storage mycotoxins such as Ochratoxin A, (OA), produced by Penicillin spp. do not develop if the grain is consistently below 17% moisture, but infections can take hold within days if moisture levels are 20% or above.

Wet harvests have produced samples of grain in the UK with levels exceeding the proposed EU limit of 0.005ppm.

The Use of Roundup

Use of Roundup can produce drier grain, and therefore reduce the time taken to dry down to the critical 17% moisture level. This can reduce the chances of hot spots of infection building up in store.

If difficult, wet harvesting conditions are followed by continuing warm, moist autumn conditions, the time taken to dry down is prolonged. Harvest Management can help minimise this risk.

Cereals to be cut for whole-crop silage can be treated under the grass silage approvals as grass. A 5 day cutting interval is required.

Wheat, barley or other cereals to be combined for grain must be treated at less than 30 % moisture .This means crimping of crops combined at over 35% grain moisture falls outside Roundup approvals and is not recommended.

This technique uses mostly feed wheats, but can also be used with barley, naked oats or Triticale. The whole crop is harvested using a modified forage harvester and is clamped using an alkaline preservative. This relies on the release of Ammonia gas for a dry preservation, not fermented into acidic silage as conventional silage. The resulting feed is 60% plus dry matter, high energy feed which compliments acidic grass silage and is said to lead to increased milk yields and reduced fertility and lameness problems. The technique is finding favour with dairy farmers as it is home grown, fully traceable and has a wide harvest window. The timing for cutting starts around 35% grain moisture and can be as late as 25% grain moisture. Where crops are full of weeds and 30% moisture or below Roundup treatments can be used under the cereals recommendation. However, because the crop is whole-crop foraged and clamped it can still be used under the grass silage recommendations during the earlier part of the harvesting time. By removing sappy weeds, with the use of Roundup, good Alkalage can be made from weedy crops, which would otherwise have had too low a dry matter %. 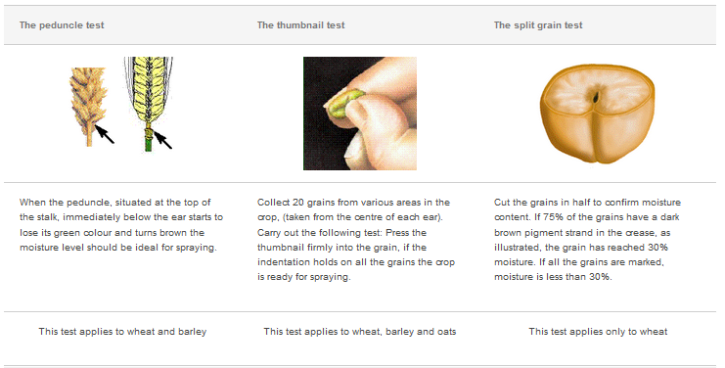 Why desiccate with Roundup?

Most OSR crops can be direct combined following Roundup conditioning in most seasons without difficulty.

Roundup desiccates the whole plant including the stems.  There is less green material ensuring a cleaner, dryer sample with lower admixtures.

Roundup conditioning must be well-timed and managed for the greatest value and harvesting efficiency.

*If approximately half of the seeds are turning brown, the crop should be ready to spray in 3 days but repeat the procedure to check that the correct stage has been reached.

NB. Spraying too early will lead to poor desiccation.

Linseed can be difficult to harvest when stems are green and weeds like Cleavers are present. A wet summer will aggravate combining problems. Treatment with Roundup gives faster and easier harvesting, with minimal seed losses. Drying and cleaning costs can also be reduced.

To confirm that the seed is below 30%, check a total of 40 seeds from four points in the field, at least 24 should match the colour range below, the rest should be a shade of green. If they do not then the crop is NOT ready for spraying. Check after 3-5 days.

A minimum statutory harvest interval of 14 days must be observed, however an interval of 21-28 days may be required before combine harvesting.

Linseed grown for oil production should be desiccated at the brown capsule stage. Seeds are light brown and rubbery, lower leaves are withered but the upper leaves and stem are still green/yellow. Confirm by sampling 40 seeds from four points in the field and at least 24 should be in the orange/brown, beige/brown colour range, (similar to a milky cup of tea).  Seeds are initially white to light green, (too early) and end up dark brown, (too late).

Timing is the same as Linseed with regard to crop growth stage and capsule colour. However, the seed is only a light brown or yellow colour even when ripe. Caution is needed to match the correct growth stage. Seed colour starts off as green then turns white and finally light yellow. So optimum timing is when seed colour is white, not light brown as for linseed.

Apply Roundup when the average moisture of the seeds of field beans or peas is below 30%. At this stage pods of both crops will be mature.

The crop is ready when:

Lupins are normally self-desiccating and would only require help for weeds rather than desiccation of the crop itself, but there are varietal differences, with some tending to hold on to a small ring of leaves at the top of the stem until relatively mature.  30% moisture in lupins usually coincides with most leaves having dropped off and the pods being yellow and wrinkled.

An interval of 10-14 days is necessary before combine harvesting.  When used solely for weed control a minimum of 7 days should be allowed.