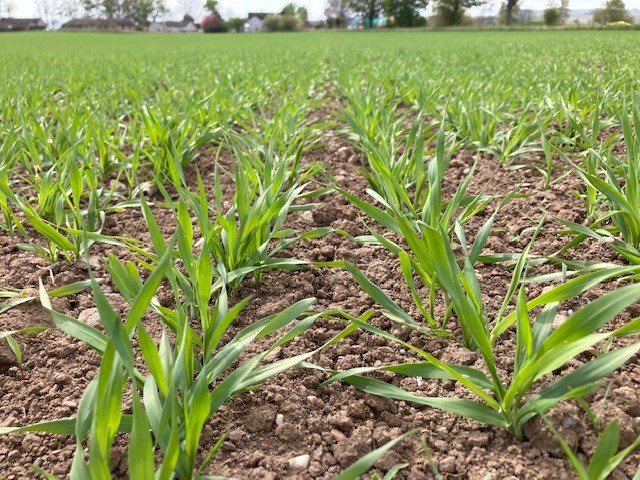 Most winter cereals are looking exceedingly well. Some rain in early April helped wash fertiliser in to push them forward along with some warmer weather, although as we approach the end of April, dare I say we could perhaps do with another drop of rain.

Oilseed rape is starting to flower with some crops more advanced than others.

Potatoes will likely be still getting planted into early May, but again the weather has been helpful for conditions.

Grant’s agronomy tips for May

Some growers will have made a start on wheat T1 sprays in the last few days of April, but most will be applied in early May.

Timing is crucial for T1s in wheat. It’s easy to visually think the crop is at the right growth stage, but you can only really know by dissecting plants and unrolling the leaf layers to make sure leaf three is fully emerged. Applying fungicides to leaf four rather than leaf three is less than ideal for successful control of diseases.

Septoria is being found in most crops, and while it has been dry in the latter half of April, it doesn’t take much moisture to get it bouncing up the crop as we saw last season.

There was a little bit of yellow rust in susceptible varieties at our variety demonstration in Midlothian earlier in April, along with some old mildew and signs of eyespot.

We’re offering rapid disease testing as part of our CropCheck service, which tests leaves for latent infections of Septoria and yellow rust. This gives you another layer of information on which to base decisions along with varietal susceptibility, weather, drilling date and visual symptoms.

Depending on weather the first T2 sprays could be applied as we reach the end of May, particularly in the more forward crops.

Flag leaf sprays are key for maintaining green leaf through to harvest and maximising the photosynthetic opportunities for the plant.

Monitor crops carefully in the run up to applications and again consider using CropCheck to add more information to your decision.

Ascra is a good option at T2 – covering all key diseases and giving good flexibility for matching rate to risk and with a good size can to make it easier to match to field size.

If it remains dry that may well raise the risk of Ramularia in winter barley as the crop becomes more stressed, which seems to increase risk. Rhynchosporium is also being found in some crops, and is potentially more of a threat if rain arrives.

Fungicide options will depend on what has been used at T1. If you’ve applied Ascra, which can only be used once in barley crops, then 0.4 L/ha Siltra (bixafen + prothioconazole) is a good alternative.

If you still have the option to use Ascra, the fluopyram should prove useful against Ramularia while it is also excellent against other foliar diseases.

The best timing is awns emerging – often called the paint brush stage, although both Siltra and Ascra can be used up to the beginning of flowering which is a later cut-off date than many products and does provide a degree of timing flexibility.

Spring barley has established well, especially the earlier sown crops. The later drilled crops could do with a drink but hopefully will pick up once rain arrives.

First disease control applications should be made at the end of tillering – usually once the rows meet and you can no longer see any bare soil. The main disease threat is usually Rhynchosporium at this timing. Mildew tends to be less of a problem in spring barley as most varieties have decent resistance, while net blotch also seems less of risk in this part of Scotland.

While costs of other inputs, such as fertiliser, fuel and labour have risen dramatically on farm, agchem is relatively stable. At current crop prices that should justify a two-spray approach with Siltra and / or Ascra again decent choices.

If you are thinking of a one-spray approach the timing should be delayed until flag leaf, but it risks compromising disease control by either letting disease become established before application, being too early for Ramularia or running out of persistence.

With epoxiconazole no longer available for use, Ascra, which also now has a label approval for oats, is an option to control crown rust.

In our trials we also know prothioconazole will do a good job on mildew and perhaps a little more than we have given it credit for in the past. Crown rust is more of a threat in the central belt of Scotland than further north.

Avoid large tank mixes, especially growth regulators with herbicides in oats to reduce the risk of crop damage. Sometimes it seems you just look at oats in a funny way and they change colour!

First flowering sprays for Sclerotinia in oilseed rape were going on towards the end of April. Disease pressure has been low because of the dry, although even in a dry year it can be a threat, particularly if we get some heavy dews that help stick the petals to stems.

Other susceptible crops in the rotation, such as peas, beans, carrots and even soft fruit can all potentially increase risk if grown on the farm.

Where first sprays are still to go on, Aviator at 0.75 L/ha will not only control Sclerotinia but also any light leaf spot in the crop.

At the current oilseed rape values if flowering is prolonged past the three weeks of protection that will give you, then a follow up spray of 0.5 L/ha might be justified this season. 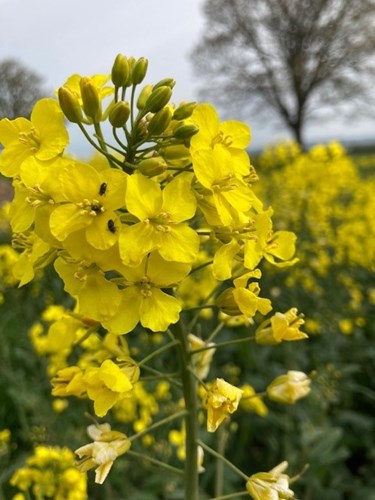 7. Be careful with potato emergence and herbicides

Emerger (aclonifen) makes a good mix partner base for any later planted potatoes still to receive herbicides, but do make sure it is applied at least seven days before the potatoes emerge.

Follow best application practice when using it – apply to settled ridges to maximise coverage, and use constant agitation before, during and after putting it in the tank.