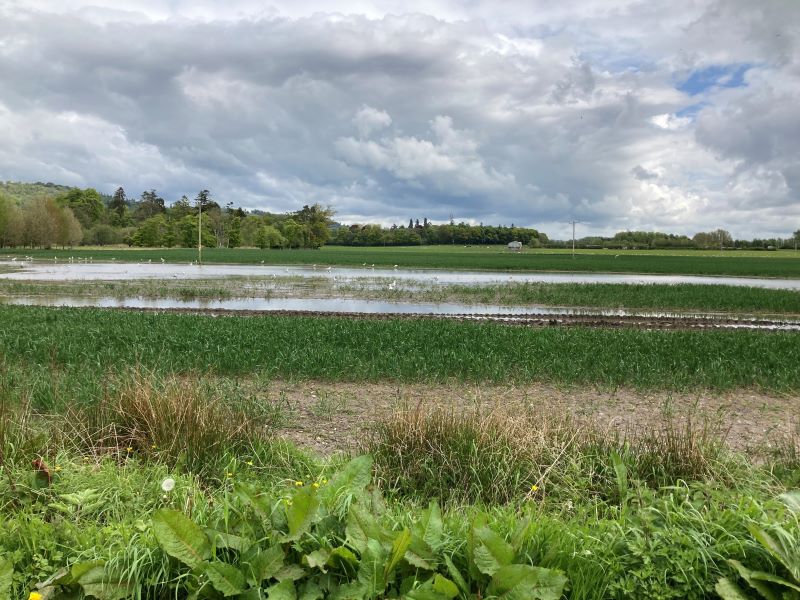 Crops are looking pretty good after the rain in May. We have had some warmer days and that made a huge difference to crop growth, after crops picked up nitrogen which had finally been washed in.

Oilseed rape is in flower as we approach the end of May, albeit patchy in some places where there has been pigeon damage.

1. Concentrate on timing for disease sprays in June

Our rapid disease testing has picked up Septoria on some of the lower leaves, and of course there has now been rain, but the actual threat has been reduced by the cool temperatures. I would be more worried if the temperatures increase so the disease would cycle more quickly.

Visually there is Septoria in crops, but it is low down in the canopy and not at alarming levels. Crops are generally smaller in height this year, so in the right conditions it may not take disease long to get spread about the plant.

In one of my rapid disease samples we also picked up very low traces of yellow rust, so remain alert to its threat.

Flag leaf sprays are likely to be in the first couple weeks of June. If disease pressure remains like now, Ascra (bixafen + fluopyram + prothioconazole) will be a good option at a rate of 1.0 – 1.2 L/ha, with the addition of folpet if you think it is worthwhile.

There might be some growers considering doing a “head and shoulders” type approach of combining flag and ear sprays, but I would suggest given the weather it is better to stick to the separate timings, even if that means the gap between the two is quite short.

Timing is key for every spray, but particularly for T3 when targeting Fusarium. If you have gone cheap and cheerful at T1 and didn’t use a SDHI-containing fungicide, you have the option of using a SDHI, such as Aviator (bixafen + prothioconazole) at T3.

Harvest is still a long way away in Scotland and the greening effect from Aviator can be very useful. Every extra day you can keep the crop green before senescence is worth around 0.1t/ha.

The Xpro formulation in Aviator and Ascra is also helpful – it’s easy to forget the added benefits of rainfastness within minutes, plus the other physiological benefits which are label claims.

Where a second SDHI has already been used, then Proline (prothioconazole) remains a good option – use 0.55 L/ha for good activity on Fusarium.

There’s been no shortage of moisture in May, so many spring barley crops are looking good. With the moisture there has been a flush of weeds come through, so mixing herbicide with T1 fungicides if they are still to be applied at the beginning of June could make sense. Just check labels for compatibility.

The awns emerging timing for the second spray tends to be the more important one in spring barley, which will likely be towards the end of June.

While varieties are not as susceptible to disease as they used to be, there has been some Rhynchosporium on winter barley, so the potential is there for disease, especially given the wet weather and if it warms up in June.

Ramularia is a bit hit and miss, but should be considered at T2. It’s brought on by stress and wet leaves, and there are issues with resistance to strobilurins and SDHIs. A decent rate of prothioconazole still has activity, and the addition of folpet may also be helpful.

3. Watch out for emergence on potato crops

The vast majority of potato crops hadn’t been sprayed as we approached the end of May because of the wet weather, with some area still to be planted.

Remember if you’re using our herbicide Emerger (aclonifen) that it needs to be applied at least seven days before emergence of the crop. It’s a mixture product – so use it with other herbicides, such as Artist (flufenacet + metribuzin), which gives excellent control of annual meadow grass and a range of broadleaved weeds.

While blight sprays may seem a way off as this is written with some crops having taken over six weeks to emerge, first late blight sprays should be considered not long after the rosette stage.

Sign up for AHDB’s Fight against Blight service, assuming it is continuing after the recent vote on the future of AHDB Potatoes, to receive alerts about blight outbreaks in your locality, and also do the all the right stewardship measures such as destroying any green material on outside grading dumps, and controlling volunteer potatoes in other crops to reduce the threat from blight.

Plan blight programmes carefully. With fewer options for controlling tuber blight at the end of the season, make sure you keep some applications of remaining products, such as Infinito (fluopicolide + propamocarb) back to cover that threat, while maintaining good control of foliar blight during the season with applications on seven day intervals.

If you have varieties susceptible to Alternaria, such as Markies, then our new product, Caligula (fluopyram + prothioconazole) is likely to be of interest, as it has set a new standard compared with current products for the control of the disease in trials.

Use it at 0.5 L/ha once you see signs of disease, with a maximum total dose of 1.5 L/ha, but don’t apply more than two consecutive applications. There’s a harvest interval of 21 days. It will also give some control of Sclerotinia, which might be useful given the number of crops susceptible to that disease in our rotation, but doesn’t give any control of late blight, so you will need to mix in a late blight fungicide.

Flowering in oilseed rape has been very drawn out this season with the cooler weather. That might mean some growers could require a second application. Typically fungicide for Sclerotinia have around three weeks persistence, so if your first application has been on for that length of time and flowering is still occurring, consider topping up control.

As we approach oilseed rape harvest in July and August, assess crops carefully for when to desiccate with Roundup (glyphosate). Typically take a representative sample of 20 pods from the field, and when the majority of the seeds have turned brown or black that’s usually the indication the crop has reached the 30% moisture content threshold for treatment.

Don’t go too early, otherwise you could lose yield, reduce oil content and increase red seed, and also make sure you get into the field when sampling to make sure the sample is reflective of the whole field. If the crop is at very different growth stages consider splitting the field if possible when desiccating.

Finally check glyphosate labels carefully – not all of them have oilseed rape on the label.