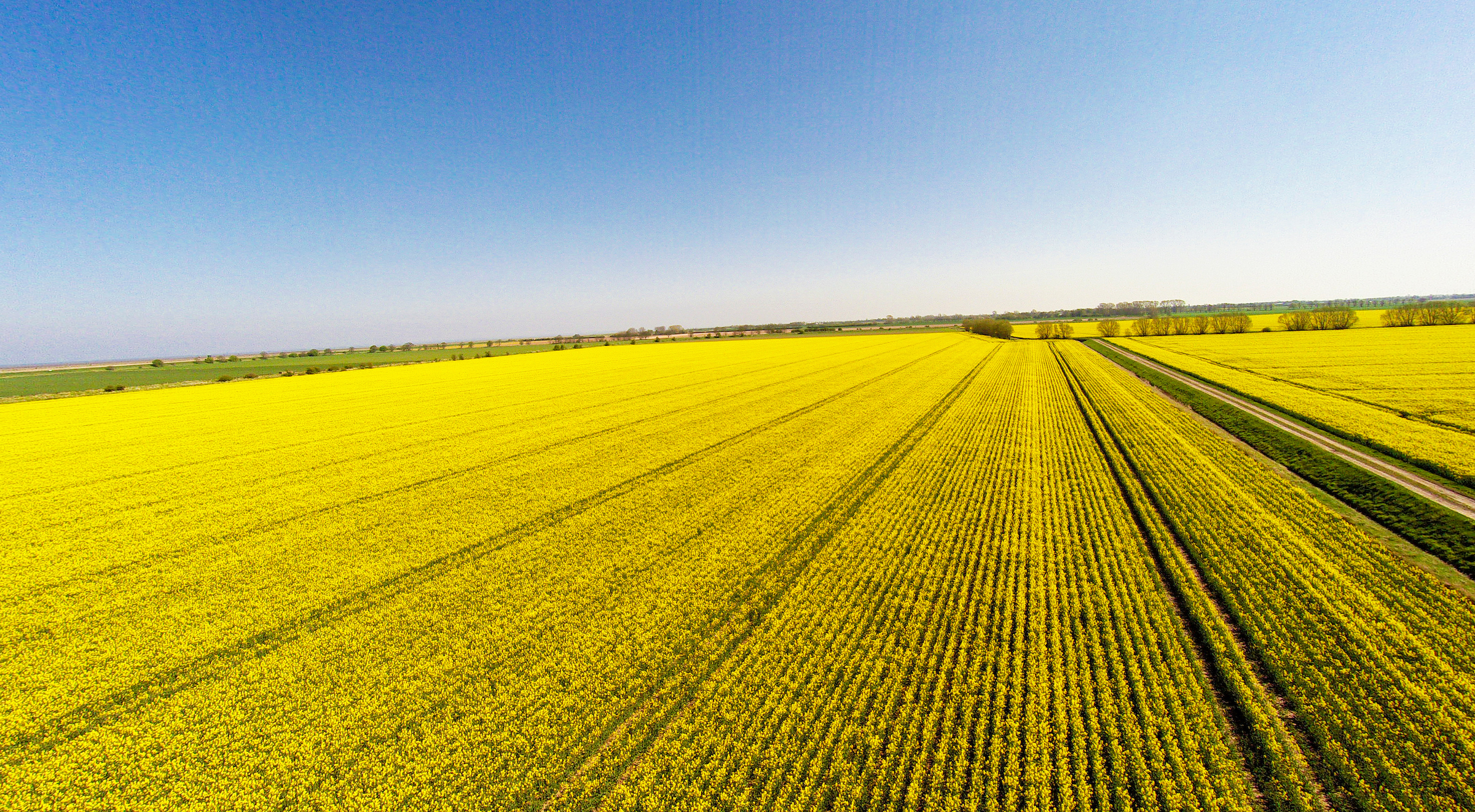 After almost certainly the wettest winter on record and in the main relatively cool conditions throughout March crop development and field work has been a bit stop start. Winter cereal crop potential is of a mixed bag, but in the main better than 12 months ago. A dry spell at the end to February allowed traveling for early nitrogen which was a blessing given the winter rainfall.

Spring cropping has progressed, with some sugar beet drilled by the end of March for those that had seed. However, much of the crop will go in the ground relatively late which isn’t ideal.

Oilseed rape area may be down, but crops are looking reasonable coming out of winter, and seem to have coped with the cold winter weather a bit better than other break crops such as winter linseed and beans. Implications of larval damage are yet to be known.

1. Take care with any outstanding grassweed control in cereals

Most post-emergence herbicides should have been applied by the end of March but make sure any remaining sprays are applied to a dry leaf with at least a couple of hours drying time.

Despite the inevitable pressures, it is also best practice to apply mesosul furon-based products alone, such as Pacifica Plus (mesosulfuron + iodosulfuron + amidosulfuron) with Biopower if possible, and leave suitable intervals to any other applications.

Bearing in mind the generally cool conditions in March as daylength has increased, I’d expect wheats to move quickly as temperatures increase and the potential for crop damage likely to be high, especially for later drillings.

2. Focus on yellow rust at T0 in wheat

With the current mix of pathotypes and virulence of strains of yellow rust, it pays to take the resistance ratings on the AHDB Recommended List with a pinch of salt and monitor individual varieties closely.

Couple that with the loss of chlorothalonil, then T0 is ever more very much a yellow rust focused application and will likely result in plenty of tebuconazole used at this timing.

The main thing is to make sure of is that the interval from any T0 to T1 isn’t stretched too far. The T0 application should be no more than three weeks ahead of when the T1, and preferably more like 10-14 days given the rust situation. That’s because yellow rust cycles quickly and you want to be following up by then to keep on top of the disease.

In most crops final leaf three will be fully emerged from around the last week in April give or take a few days, so work back from there. If there was a need to treat yellow earlier than a T0 timing, then fine but don’t compromise other timings as a result.

3. Focus on both yellow rust and Septoria at T1 in wheat

Following on from the T0 with no chlorothalonil and potentially no or limited Septoria cover, it’s important to factor this in when considering T1 options for both Septoria and yellow rust.

You’re looking for leaf three fully emerged on the main tiller – unrolling tillers is the only way to determine which leaf you’re seeing at this growth stage.

Finding new chemistry that is good against both Septoria and yellow rust is hard to come by, but Ascra Xpro (bixafen + fluopyram + prothioconazole) certainly fits the bill. It’s the best allrounder covering both of these diseases as well as mildew and stem-based diseases. The mix of the two different types of SDHIs in bixafen and fluopyram complement each other helping to manage the mix of Septoria isolates widespread in field populations.

It also has good rate flexibility to dose appropriately to what the disease pressure is at the time of application for individual varieties. Typically we’d suggest 1.0-1.2 L/ha as a starting point.

Another benefit of Ascra Xpro is its Leafshield formulation with rainfastness in minutes if the weather is inclement – it’s reassuring to know that the product is dry on the leaf as you head back up the next tramline if rain clouds are looming. Conversely if it’s dry and hot there’s a host of physiological benefits that Ascra Xpro provides as per the label claim.

If you’d like to add in folpet that’s fine, but it’s inclusion should be based on a case-by-case basis depending on variety and disease pressure.

The first main fungicide spray in winter barley is the most important as yield is dependent on maintaining tiller count. Maximising tiller retention is key, and disease infections can cause the plant to abort tillers, reducing yield.

Timing will depend a little on whether a T0 has been applied as that can shuffle things, but typically you’re aiming for GS30-31. It’s important to maintain the dose of prothioconazole especially given the net blotch sensitivity situation and that can be achieved by using products such as Siltra Xpro (bixafen + prothioconazole) at 0.6 L/ha.

The product not only contains prothioconazole alongside both the disease and non-disease benefits of bixafen with the Leafshield formation but importantly has them in the right balanced ratio.

Continue to try to do all you can both culturally and through nutrition to help minimise stress on the crop at flowering to help mitigate against Ramularia.

Oilseed rape crops that look good coming into April are probably worth investing in, not least with the current price of oilseed rape around £400/t.

Keep an eye on light leaf spot because our Spotcheck service has confirmed high levels of light leaf spot in crops this spring in the east. In February, of 195 samples assessed by ADAS over 92% were infected with latent disease, driven by the early planting and wet winter weather.

Obviously, risk may vary depending on what fungicide may have been applied to date and to which variety, nevertheless make sure you check crops. If the disease is allowed to get onto flowering buds there is no way back.

Aviator makes a good option for good looking crops of oilseed rape this spring. It covers all the disease aspects – light leaf spot and Sclerotinia – and also gives physiological benefits supported by the Leafshield formulation playing a big part in dense canopies. In our farmer Judge for Yourself strip trials over the past two years of low disease pressure we’ve seen an average 0.2t/ha yield benefit over current standards by prolonging flowering.

Despite the forecast for the migration of Myzus being later than last year, drilling is also later. We need to get crops to 12 true leaves as soon as possible, which means avoiding anything that can hamper growth caused by undue stress. That’s a fine line to tread with herbicides while still achieving satisfactory weed control.

Without desmedipham-containing products, such as Betanal maxxPro (phenmedipham + desmedipham + ethofumesate + lenacil) that challenge is even greater, especially if we go into a dry or cool time and more attention to detail is likely to be required as well. The first spray of the new (old) option Betanal Tandem (phenmedipham + ethofumesate) with oil should be applied when the weeds and crop are at expanded cotyledon.

If you’re growing a Conviso Smart variety with Conviso One (foramsulfuron + thiencarbazone) then timing is everything and there are many factors to be mindful of for both efficacy and technology stewardship. With regards to timing, if anything be a little earlier with the application rather than too late. Make sure you talk to your agronomist to understand the stewardship requirements about the technology.

Remember with regards to virus control keep on top of any old spoil heaps from last year’s crop to eliminate any sources of infection to the new crop.

Emerger (aclonifen) has found a useful role in potato weed control tank mixtures with its strengths on Polygonums, brassicas, nettles and Chenopodium species, such as fat hen and orache.

Make sure Emerger is applied at least seven days before crop emergence and also follow best filling practice, so things like having a clean tank, half filling the tank with water before adding product, using the right mesh sizes in filters and above all always maintain constant agitation throughout as well as keeping to approved tank mixtures. More information can be found on our website.

8. Look out for new offers from Bayer for FieldView Plus

FieldView Plus provides real-time insights into your farm data. With an age-old issue of years of farm data collected but no way to exploit it, FieldView Plus is a digital platform that addresses that.

Being able to view field applications in real-time with easy-to-use tools to analyse that data means inputs made this spring (along with previous farm data) with real-time harvest data will inform and enable anyone logged into the account to react straight away for next year’s agronomic decisions.