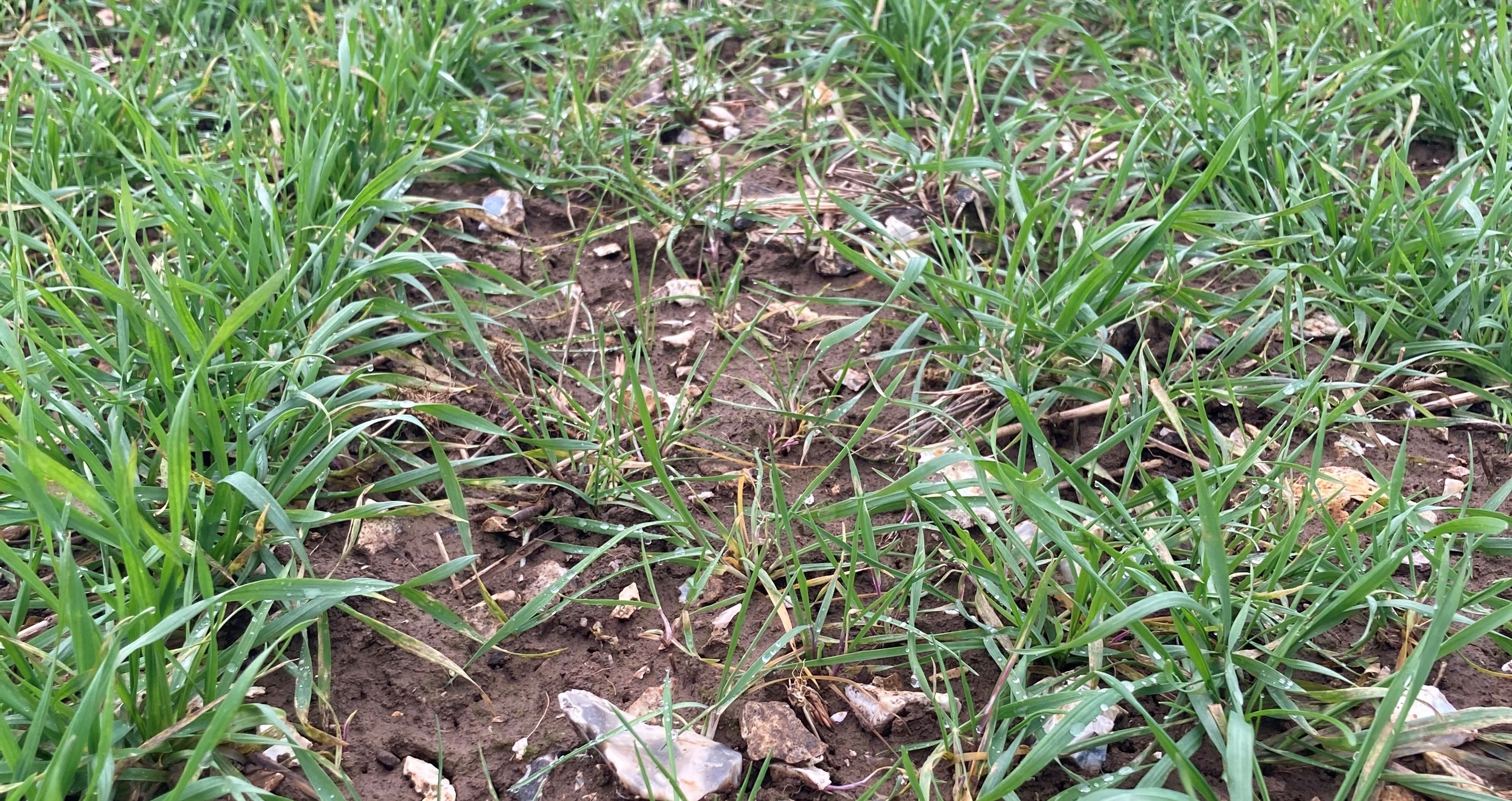 Around 95% of the intended winter wheat area was eventually drilled in the autumn – a marked improvement on the year previous. The crop looks promising with growers and agronomists optimistic about its prospects, although you can easily find Septoria and yellow rust on susceptible varieties.

Oilseed rape looks as good as I can remember for some time. Establishment was very good and crops grew away from cabbage stem flea beetle attacks. Growers rightly started to protect crops from light leaf spot and Phoma in the autumn.

There are some reports of larvae within stems, but nothing alarming as I write. At the moment, it’s typically 1-2 larvae / stem so hopefully the plant is robust enough to cope with that level of infestation.

While most drilling was finished, the same can’t be said for herbicide applications. It wasn’t the easiest autumn, so there is a real mixed bag of progress.

Some managed to apply a full residual programme with a pre-emergence and a follow up, some just a delayed pre-em, and others nothing. That does make it trickier for farmers to decide what course of action to take.

Where the pre-emergence residual treatments have worked well because of the good, moist soil conditions, the key is now finishing off the programme to keep ahead of the weeds and reducing weed seed return this summer.

In crops where the autumn programme was curtailed or missed, then applying a good post-emergence product will be even higher a priority.

A good choice would be Pacifica Plus (mesosulfuron + iodosulfuron + amidosulfuron), which is the most all-round product, giving good control of all grass species with the addition of good broadleaved weed control. That includes chickweed and mayweed, which are becoming a problem in the south, along with fumitory on lighter ground, offering better efficacy than pyroxsulam-based products.

2. Watch out for growing threats from ryegrass and brome

While black-grass has generally been better controlled in recent seasons, issues are starting to arise on ryegrass and bromes in the south-east, so it is important to know which species you are dealing with.

Timing was also important in the weed screen trials. Over the past few seasons, we’ve applied Pacifica Plus in January, February and March in these trials, and found that sweet spot is dependent on weather – ideally you’re looking to apply once the cool weather has lifted without leaving it too late and the weeds have grown too large. Not an easy decision!

3. Watch out for new ryegrass initiative

With the growing concern over controlling ryegrass and resistance to key herbicides developing, it is important to understand how widespread the problems lie. So, as a starting point, we want to capture resistance data by sending off shoot samples to our Weed Resistance Competency Center in Frankfurt, Germany to be analysed.

Assuming COVID-19 lockdown measures are lifted in time, we’re looking for around 10 samples per region to send in this first year of the project, which will help identify locations that are struggling and where we can help with targeted plans.

If you’re interested in having a sample taken either this spring or later in the year when we will be following up with seed samples, then please let me know.

Our Spotcheck service is running again to help growers understand the risks from light leaf spot. Samples are sent to ADAS for analysis, with results usually returned with five days.

Six out of the seven samples sent in December for the south east tested positive for light leaf spot, with up to 83% incidence of the disease from one sample. Across the country, light leaf spot seems to be tracking what happened with the disease last season, when we had high incidence.

So with potential back in oilseed rape this year, it will make sense to protect crops at the next opportunity. Proline (0.32 l/ha) is a good option to consider.

5. Clean up stubbles ahead of spring planting

Ahead of spring planting, it is worthwhile cleaning up stubbles to get the following crop off to the cleanest possible start, and to avoid having to rely on in-crop herbicides as much, where the options are sometimes limited.

Not all glyphosate is Roundup. Our trials have found that Roundup formulations work more reliably in cooler conditions you find in February because of the balance of surfactants in the formulation. In a month where there is likely to also be showers, the improved rainfastness of Roundup formulations is also important.

Maximise efficacy by hitting weeds when small and choose the right dose for the weed species present. Ensure good application by travelling at no more than 14 km/hr, using medium to fine nozzles – either air induction or flat fans, and water volumes of 150-200 l/ha.

Potato growers on the tip of Kent and Isle of Wight will likely start planting potatoes in February. With the recent news of the loss of authorisation of Vydate (oxamyl), nematicide choices are more limited, unless an emergency approval is given.

Our recent introduction Velum Prime (fluopyram) has added a second method of application to the label – broadcast and incorporate – to the in-furrow application already on the label.

One advantage of Velum is the low use rate, which reduces the amount of product storage required with a granular nematicide. In trials, under low potato cyst nematode pressure Velum performs similarly to Vydate, while in higher pressure situations then you might want to use it alongside a half dose of a nematicide granule.