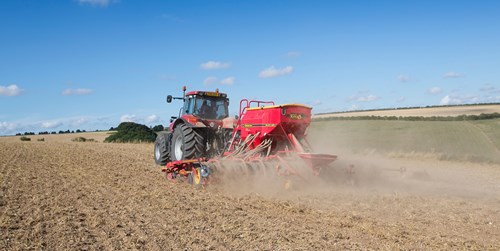 Some nutters, I mean eager growers, started drilling wheat in September, but you can’t blame them after last season. Generally it has been on the less seriously grassweed infested land. I do know of some farm managers that have hidden the tractor keys or gone on holiday to ensure they couldn’t start drilling.

But there’s probably no more than 10-15% wheat drilled yet, plus the winter barley.

Oilseed rape is all over the show. Probably around 50% of growers have given it another go, and the area is back perhaps by 25% overall on last year. Most crops drilled in the early part of August have got away well and are around 3-4 true leaves, while that drilled after has struggled much more with dry weather and cabbage stem flea beetle attack.

Where you have grassweed problems try to hold off drilling wheat until after 10 October, and maybe even a week longer than that, if possible. When you have a large area to drill it’s obviously difficult to hold off longer than that, but every week you can successfully delay will help not just black-grass control but also reduce disease pressure and BYDV.

With some grassweeds already coming up, despite the dry September, in some crops already drilled, it is going to be desperately difficult to control them, and may even need a glyphosate recommendation in a month’s time.

There isn’t much reason to change from what has been done previously with pre-emergence herbicides. The one thing that might be worth considering is splitting some of the enormous herbicide stacks into two treatments, one at pre-emergence and then a follow up application 10-20 days later.

Most residual herbicides, with the exception of some actives like diflufenican and aclonifen which are shoot uptake, need to get down to where the roots are to work properly. But in dry conditions that won’t happen so they sit on the surface degrading until there is moisture to move it down the soil profile, and if it is warm that only speeds up the process.

So the theory behind splitting is why spend £100/ha on a big stack if you’re going to lose some of it before it has the chance to become effective and splitting it might be the way forward.

That argument perhaps become less relevant if we get into better conditions in October as the products should work better in the cooler, damper conditions, but at the same time for an October-drilled crop the last thing you want to do it is hold it back.

By taking just one or two of the mixture partners out of the pre-emergence spray and apply them at peri-emergence, you both extend the life of the residual cover and reduce the likelihood of any crop damage. Obviously the likelihood of being able to travel twice needs to be factored in to any decision along these lines.

But unfortunately this might not tie into the correct timing to spray for barley yellow dwarf virus.

3. Check for Phoma and light leaf spot in oilseed rape

Some of the early drilled crops have got away really well, to the extent there’s even been conversations about growth regulators. My opinion is that unless it very growy I think you would be very brave to put on a growth regulator in the autumn because you just don’t know what’s going to happen to the crop through pest attack to the spring. Many growth regulators are applied too late anyway – they need to be targeted around the 4-6 leaf stage to give the greatest benefits.

There’s also talk of Phoma, and growers are talking about the economics of an autumn fungicide. If you’ve got Phoma on small plants that will need to be the priority, but if we don’t see it for a while yet and plants get sizable then you can be more relaxed about it, as it does take time to get down into a petiole. In that situation you can probably consider a one-hit in late October / early November for both Phoma and light leaf spot.

Proline (prothiconazole) is the only active that does both. If you go early for Phoma with a difenoconazole remember it has poor activity against light leaf spot.

The various aphid alert tools from Rothamsted and particularly the AHDB T-Sum calculator are useful to help judge BYDV risk in cereals, and whether you might need to consider pyrethroid sprays.

If you are using T-Sum calculators, which are a reasonably reliable indicator, remember they work from the emergence rather than drilling date, or the date of the last insecticide application. So it is worth making a note of emergence date as each field comes up.