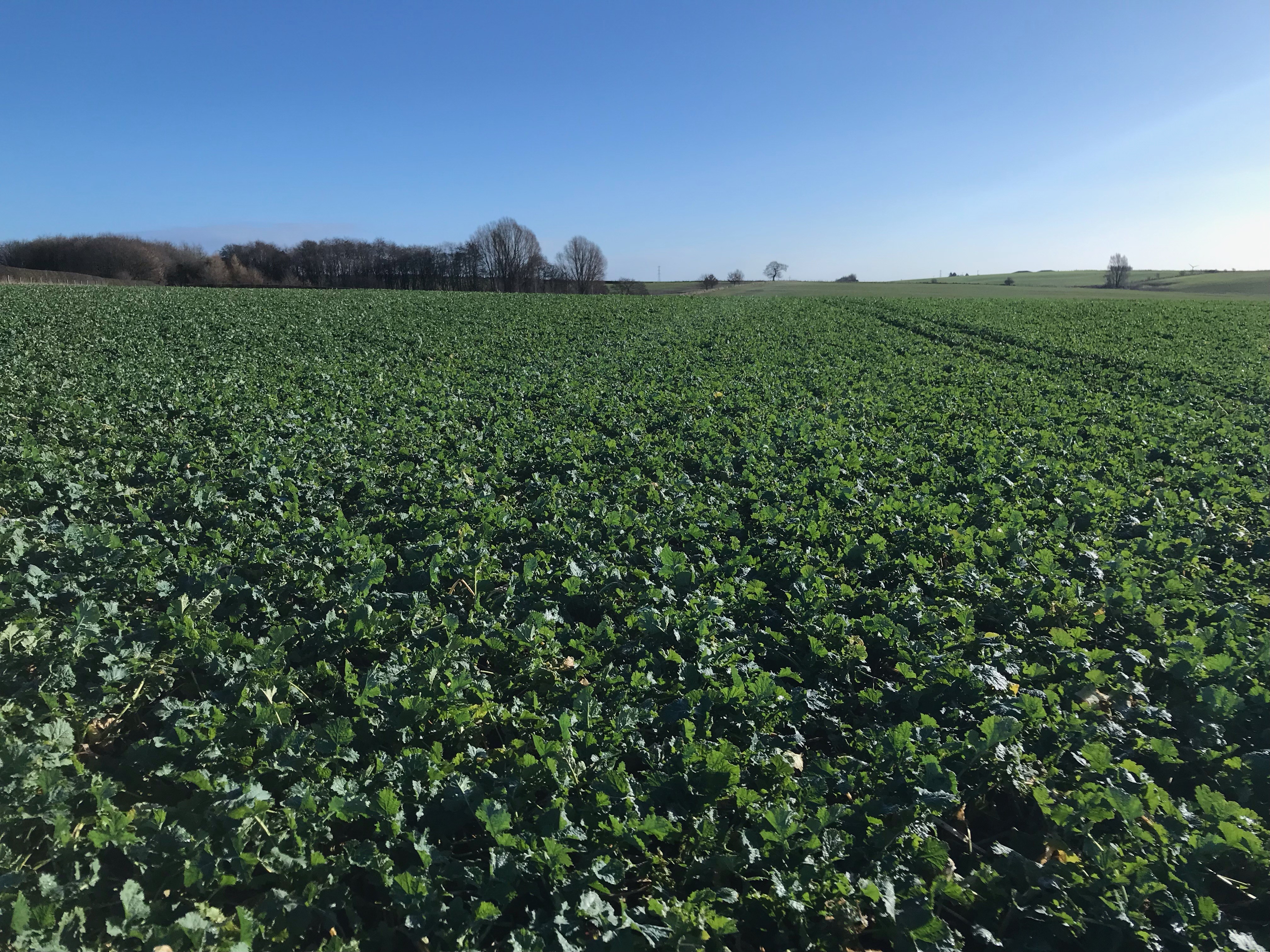 Some growers started drilling a little earlier than typical for the past few years, which might cause a few issues further into spring, but they’ve got more in and in good conditions. In hindsight, if you wanted to design the perfect mid-October drilling window, this would have been it.

Those crops have come up quite nicely, and walking fields over a wide range of geographies in the Midlands, I can’t think of too many other autumns where I have seen as much cereal crop in as good a condition as it is. So lots with reasonable potential, and hopefully worth reasonable money, albeit with higher input costs, especially fertiliser.

Oilseed rape looks okay – there were one or two that got nibbled in the autumn and one or two with little things wriggling around inside the stems (cabbage stem flea beetle larvae), but nothing like on the levels we have seen in other years.

Many crops got to decent size before the frosts have nipped it back, which will help those crops that were perhaps even too big in the autumn.

There were good conditions for pre-emergence sprays, with moisture afterwards, which has led to generally good levels of control and makes the job of the spring tidy up easier.

Of course, there are one or two that are fighting against the headwind of higher grass weed populations. Understandably there has been a lack of desire to apply glyphosate to these crops so far, given the wheat price, leading to wanting to give it a go with something in the spring, which will be more of a challenge. These crops are mostly early drilled, so the grass weed could be a bit bigger than ideal by the time we get to an application window.

The key with these is firstly identifying what the main target weed is – it is black-grass, is it brome and which species, is it a mix, do you need specific broadleaf weed control mixed in?

Don’t discount an early opportunity to get something on, even if you think if it is a bit chilly, particularly if it is one of those beautiful clear bright sunny days where herbicides seem to work better than if you purely went on the temperature.

I’ve seen Atlantis OD (mesosulfuron + iodosulfuron) work far better than you might have expected when temperatures have been only a couple of degrees, but there have been 48 hours of clear bright weather.

For cleaner crops, first consider whether you need to apply any follow up treatment – will any potential crop effect outweigh the eventual seed return? In many cases that’s unlikely, but with the cleaner crops you have the potential to wait for a bigger flush of broadleaf weeds, or wild oats, before spraying. That might compromise some control of grass weeds if they get too big to control, but that’s what rogueing is for, if you’re down at that type of level.

In that situation, Pacifica Plus (mesosulfuron + iodosulfuron + amidosulfuron) with its wider weed spectrum will be an excellent choice.

Our SpotCheck tests, in conjunction with ADAS, will help determine whether you have any infection, even before visual symptoms are apparent. If you have reasonably high levels of disease present in February it is a brave move to wait to apply tebuconazole at stem extension or even flowering sprays before tackling it. We only have preventative chemistry and it might have moved up the crop a fair bit by then.

If you do need to apply a treatment, then it will likely be prothioconazole-based – something like Proline at 0.33 L/ha. Aviator (bixafen + prothioconazole) is also an option, particularly if you haven’t used it in the autumn.

Many cover crops ahead of spring cereals will already have been terminated by now, unless you are deliberately targeting an April drill date, as they need 4-6 weeks gap to avoid potential yield penalties.

Supply of glyphosate is and has been a challenge, but one issue is that some cover crop species, if you do have covers still to take out ahead of for example spring broadleaf crops, do need a robust dose for efficacy.

For example, things like vetch require something like 1440-1800g a.i./ha, and as much as you might be tempted don’t squeak rates down by a quarter or third to cover more hectares. Instead plan to use glyphosate where you really need it and keep doses up.

For overwintered stubbles, the golden rule ahead of spring cereals is not to move soil to avoid encouraging grass weeds to emerge. Make good assessments of what the target weeds are, and plan rates accordingly. Typically rates will likely be 720-1080g a.i./ha.

Subscribe to our newsletter for the latest news and expert advice straight to your inbox.