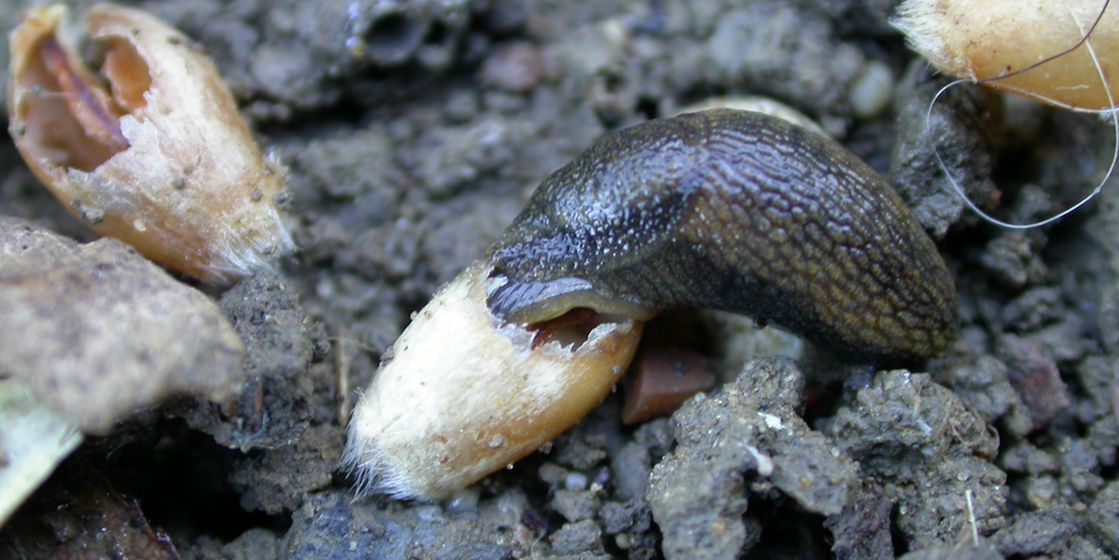 A single slug can lay as many as 500 eggs in one season. And it has been estimated that they can amass as many as 90,000 grandchildren each.

The wet weather at the start of 2018 saw the numbers of slugs swell. Although the prolonged dry summer weather will have had the opposite effect, growers will still need to consider control this autumn to reduce the risk of yield loss in autumn-planted crops.

To make matters worse, the impending EU ban on neonicotinoid seed treatments for cereal crops, will remove a key weapon in growers’ pest-control arsenal. The current autumn season will be the last time that products such as Redigo Deter (prothioconazole + clothianidin) can be used, protecting emerging plants from slugs and other pests.

Slugs usually cause the worst damage to winter wheat very early on. They are attracted to the seeds within hours of sowing, and will feed on them as soon as the seed has taken in water, eating the embryo, killing the seed, and often eating part or all of the endosperm, resulting in the characteristic seed hollowing.

Winter wheat is most vulnerable to slug attacks when it’s sown after dense leafy crops, like oilseed rape, because the leaves provide shelter for slugs. It can also be vulnerable after sugar beet and potatoes due to later drilling, poorer seed-beds and slower growth.

Spring-sown cereals are less prone to suffering from significant slug damage than their autumn-sown counterparts, because slugs are usually less active and fewer in number in the spring. Spring crops also grow more quickly through the early stages during which they are most vulnerable. Oat and barley seeds have an extra seed coat, so they are less prone to slug damage than wheat seeds.

These four cultural controls will complement any chemical methods growers are using to reduce slug pressure:

Residual parts of old plants left in the soil after harvest increase slug habitat and increase moisture capacity. Slugs need a lot of moisture to allow them to feed and reproduce, so providing them with wet organic matter to live on will increase their numbers – as well as providing them with shelter – just in time for the sowing of the new crop. Those who have baled and removed straw will generally have less slug pressure than those who incorporated it.

2.    Use the most appropriate cultivation method

Slug numbers can be greatly reduced by cultivation. The more soil that is moved, the greater the impact on slug numbers. So ploughing is better for the physical destruction of slugs than reduced, non-inversion tillage, and it also reduces the opportunity for slugs to take refuge in crop debris left by the previous crop.

However, reduced tillage systems can have an advantage in producing seedbeds that are firmer and restrict slug movement. This can be better than ploughing at reducing slug damage, as seedbed tilth is a key factor in slowing down a slug’s travel, despite more of them surviving.

So the key, whichever cultivation option is being used, is to aim for a fine, consolidated seedbed, which will help:

Rolling will help consolidate seedbeds. Slugs find it easier to move through cloddy seedbeds, and will have a greater distance to travel between baiting points.

Plants will stand a better chance of germinating successfully in a fine, consolidated seedbed that allows good seed-to-soil contact and will do so more quickly. This helps young plants get through the establishment phase quickly, limiting their exposure to slugs during this vulnerable time.

However, rolling in dry conditions may not be as effective if clods do not break down, although it can still help to consolidate seed-beds and also give a more even surface for any pre-emergence herbicide applied, while in wet conditions it might not be possible because it would smear the soil.

If the seed bed has a lot of clods, deeper drilling can prevent slugs from killing the seeds but when they grow through to the surface they will again be prone to slug attack. Drilling to a depth of 4-5 cm will achieve this, as it encourages fine soil to fall between the larger clods to form a fine tilth around the seed, which protects the seed from slug attacks. Drilling this deeply is unnecessary in a fine seedbed.