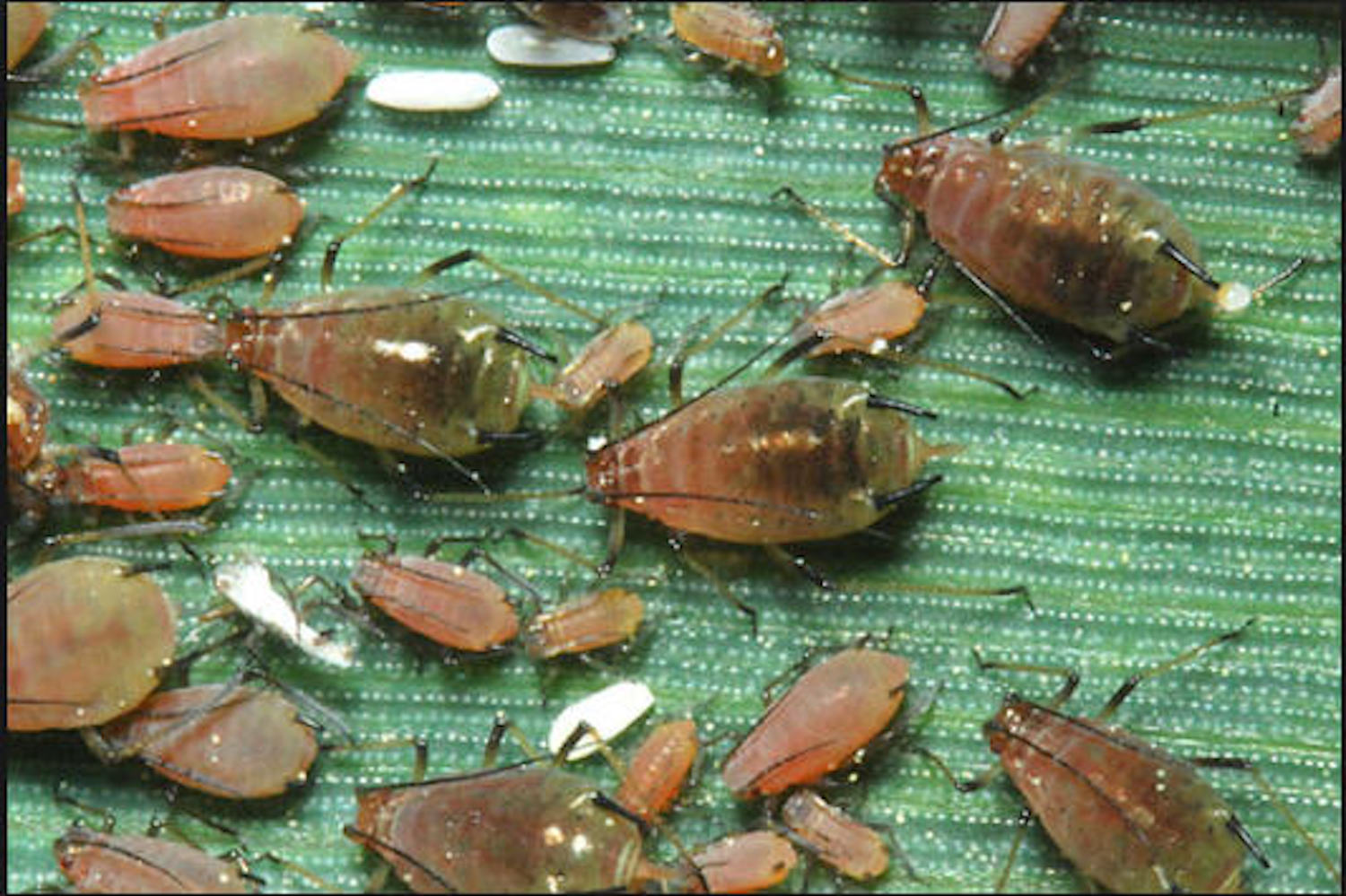 Barley yellow dwarf virus (BYDV) is a nasty virus of cereal crops that can kill patches of plants, potentially causing large yield losses. It is carried by three different aphids – the grain aphid, bird cherry-oat aphid and the rose-grain aphid. The bird-cherry oat aphid is the main carrier in the south of England, while growers in the Midlands and north of England need to be looking out primarily for the grain aphid.

The rose-grain aphid, by comparison, is considered to be only a minor threat to cereals. However, very large populations can contribute to the secondary spread of BYDV within fields.

Wingless aphids usually transmit BYDV to crops in the autumn, having spent the summer living on grass or volunteers. They then move through the soil, colonising the new cereal crop. This is particularly common in coastal areas of south-west England where cereals often follow grass and winters are typically quite mild.

Winged aphids can obviously travel further and will migrate onto emerging crops from grass or volunteers in other fields. This method of transfer is the most common route of infection.

Being able to identify any of these three aphids on your cereal crops will help to inform the timing of your insecticide sprays. Looking closely at the size, length, colour and shape of an aphid’s body parts are key to accurate identification. This will generally mean looking at:

The wingless grain aphid varies between 1.3 and 3.3 mm in length, excluding the antennae, with the winged version coming in at 1.6-2.9 mm. The antennae are 0.8-1.1 times its body length for both forms.The wingless grain aphid ranges from yellowish green to dirty reddish brown in colour. The winged form, which is broadly spindle shaped, has distinct dark markings on its abdomen. The cauda of both forms is pale and pointed, while the siphunculi is black and slightly longer than the cauda. The antennae are black. 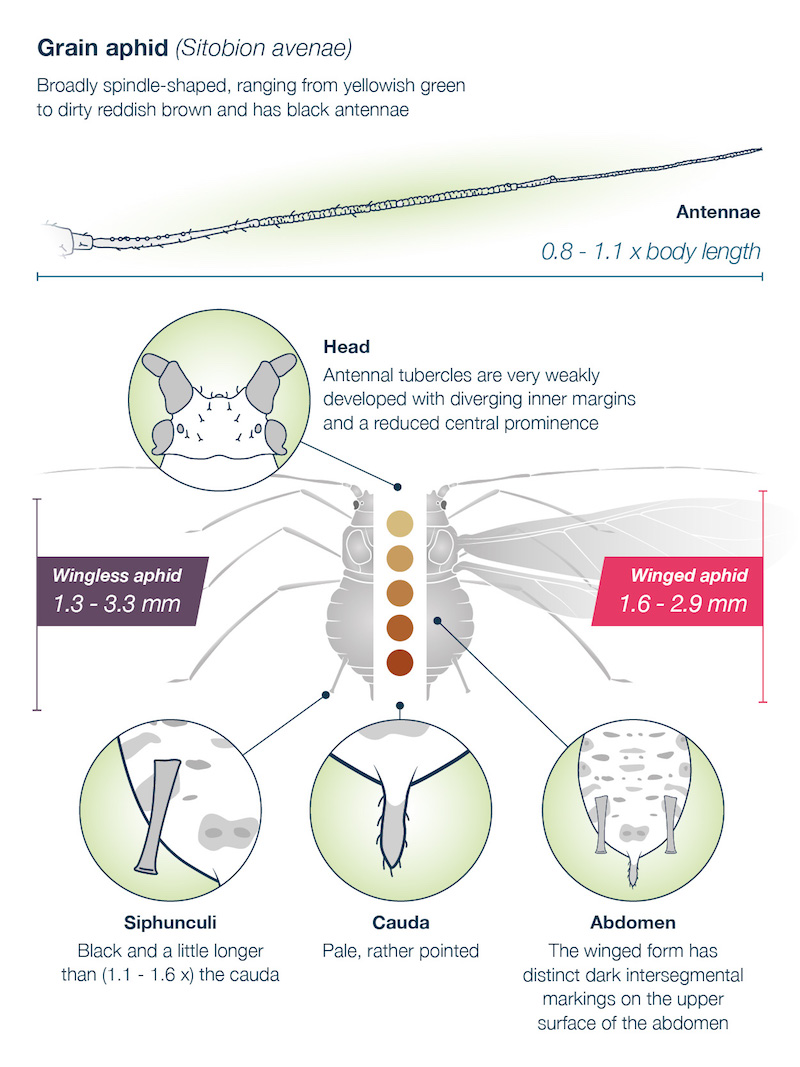 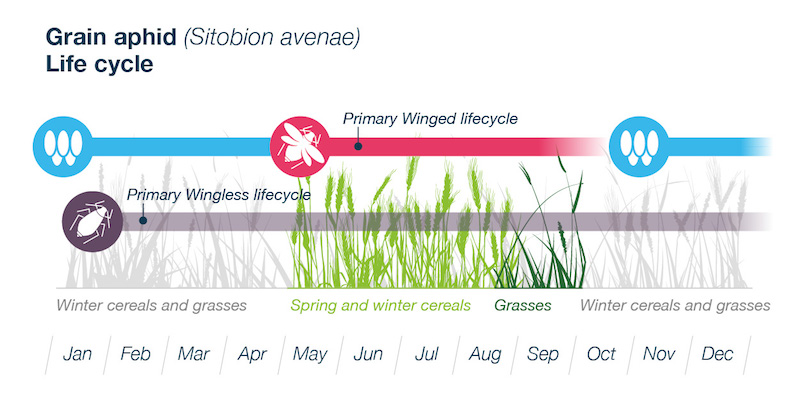 The grain aphid is considered a major pest for wheat and a moderate pest for barley. It spends its entire year on cereals and grasses. Colonies of wingless aphids develop on the flag and upper leaves of cereals then move to emerging ears, especially on wheat.

The bird cherry-oat aphid’s body is 1.2-2.4 mm long, with antennae 0.5-0.7 times its body length. Its head has small, stumpy antennal tubercles, with a small bump in between them that creates a noticeable w-shape. The cauda is shorter than the siphunculi. There are some differences between the winged and the wingless forms of this aphid. The wingless one is broadly oval in shape, brownish olive green and has a rusty red coloured area around its siphunculi. The winged version has a pale to dark green abdomen. 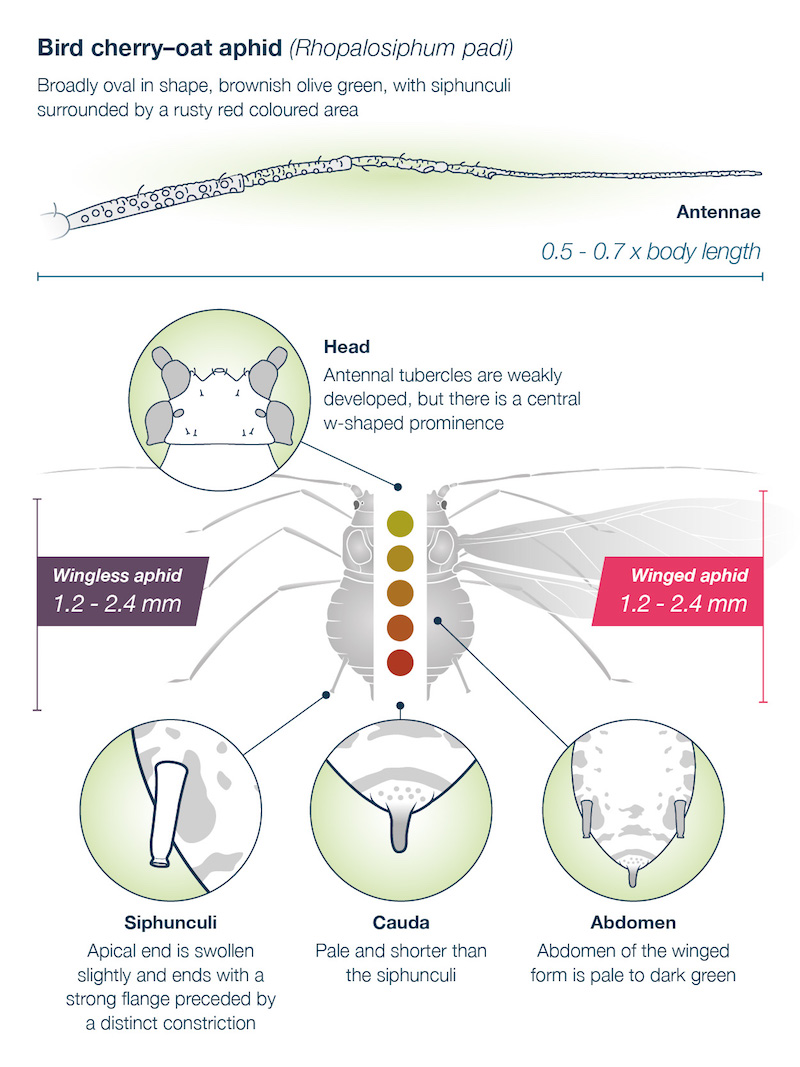 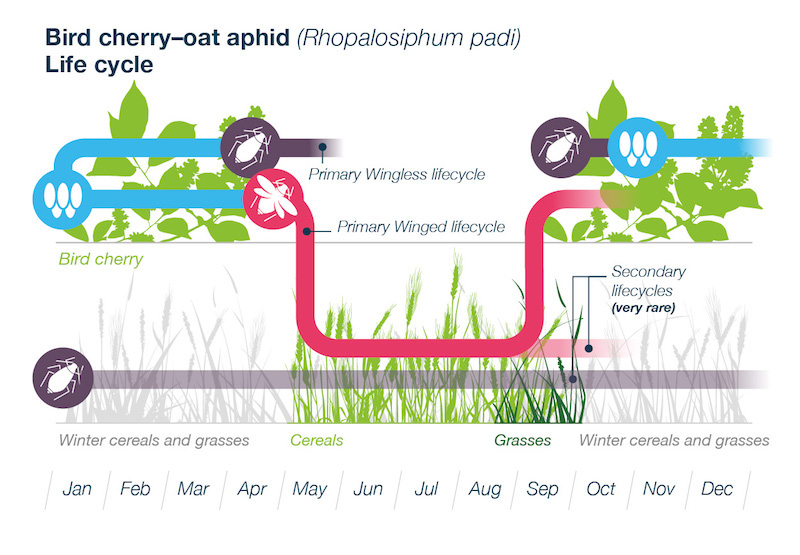 The bird-cherry oat aphid is considered a major pest for wheat and barley crops and a minor pest for rye, based on its association with BYDV. It is often responsible for the primary source of infection in early-sown winter cereals, but it can also cause secondary spread, through later generations, until significant frosts occur.

The rose-grain aphid is 1.6-3.3 mm long, with antennae 0.6-0.9 times its body length. The cauda is pale and, if you can see its tongue, it will have a noticeably blunt end compared to that of other aphids. The siphunculi is pale with slightly dusky tips. The wingless form is an elongated spindle shape, ranging from green to yellowish green, with a distinct brighter green stripe. The antennae are pale with darker joints. The winged version has a green abdomen with no markings. 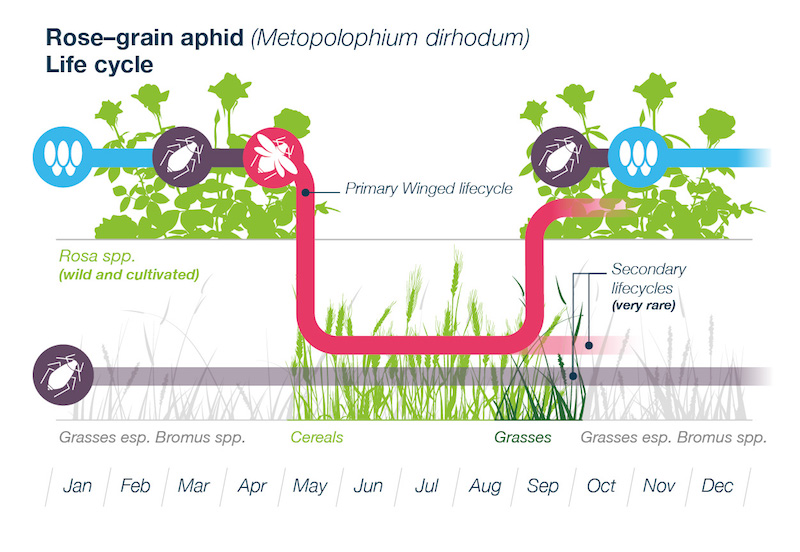 The overwintering eggs are laid on wild and cultivated roses in October and November, hatching the following spring. Colonies develop and produce winged forms in April and May that migrate to grasses and cereals, particularly wheat. Its preferred feeding site is the leaves.

The tips below will help you avoid common pitfalls when trying to identify aphids, to inform the timing of your sprays – and ensure you don’t spray unnecessarily.

Knowing the best time to apply pest control treatments is key to controlling the aphids that spread barley yellow dwarf virus (BYDV). There is a calculation that can help growers to pinpoint this.