There were opportunities to get on the land in Norfolk through April, but they were few and far between. It seems five dry days were followed by a deluge of rain to stop everything in its tracks. Spraying has not been straightforward either and although we’ve had some dry days, it’s been breezy and for a period temperatures were high. This has interfered with outstanding cereal and sugar beet herbicide applications on early drilled crops.

Sugar beet drilling is now about 80% complete and some growers on land with a higher silt content have suffered from capping and been forced to re-drill. You could question if it is now economic to sow spring barley and beans and the area of both will undoubtedly be down. The positive is this might improve premiums at harvest.

T1 fungicide applications are about halfway through and the remainder will go on over the next week. We are seeing a lot of stem-based disease, with eyespot enjoying the wet and cold soils this spring and some popular varieties only have a score of 3 or 4 for the disease. There are only 6 varieties with more than a 5, only 2 varieties with more than a 6 for eyespot resistance. It is also geared up to be a high-pressure year for fusarium and both can be knocked out in those outstanding T1s.

Rust pressure is nowhere the level it was last year, when the disease was cycling every 7-10 days, so the main disease focus is septoria. The recent rain splash will have moved the disease up the plants and the emerged leaf 3 will soon be rubbing against leaf 2 and be at risk of infection if a well-timed T1 hasn’t been applied.

If conditions remain as they are, an SDHI product at a decent rate will be required for T2 sprays. There is high yield potential in many crops, so controlling septoria and maintaining green leaf area is key to realising that potential. There may be a requirement for a T2 product with some curative activity. A 1.2L/ha dose of Ascra (bixafen + fluopyram + prothioconazole) delivers two SDHIs and an 80% dose of prothioconazole, with the two SDHIs improving green leaf area retention to ensure crops are capturing as much solar radiation through June and July as possible.

Although the key timing for eyespot and stem-based fusarium control is at T1, the prothioconazole element will help continue to suppress fusarium inoculum and ensure you aren’t putting all your eggs in the T3 basket.  Timing of the T3 spray at flowering is very difficult to get right, so anything you can do leading up to that point is worthwhile. 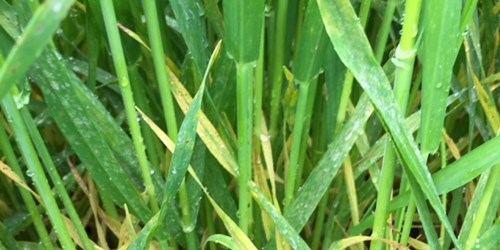 Thoughts are also turning to T2 in winter barley. There is a lot of Maris Otter grown in Norfolk and it’s susceptible to diseases such as Rhynchosporium and brown rust, which are easily found at present. Siltra (bixafen + prothioconazole) is strong on a variety of diseases and should be applied with chlorothalonil. With ramularia less sensitive to SDHIs, azoles and strobilurins, it is the go-to addition to protect against the disease and support the other actives.

The countryside went yellow after the warm spell in mid-April, with oilseed rape crops moving quickly from green/yellow bud to flowering. The focus is now on sclerotinia risk and timing. The AHDB forecast takes into consideration rainfall, humidity and day and night time temperatures. We are not quite there yet, but as temperatures are forecast to rise, a protectant spray will be required soon.

The sclerotinia timing is also an opportunity to top up light leaf spot control, which if allowed to spread up to the pods can cause premature senescence and pod shatter. Rain splash over recent days will have helped it move the disease up the canopy.

Apply the first sclerotinia fungicide as soon as the first risk period arrives and before the first significant petal fall. If the crop is still flowering 2-3 weeks later, apply a second spray and each should be prothioconazole-based to cover both the diseases.

Much of the sugar beet area in Norfolk has been drilled late this season and if first post-emergence herbicide applications knock the crop back, it won’t have time to bounce back and maximise light interception through June and July.

Growers should try and use a kind formulation, such as Betanal MaxxPro (desmedipham + ethofumesate + lenacil + phenmedipham). Also keep an eye on the weather and try not to apply during periods of high diurnal temperatures or in daytime temperatures of 21C or more to ensure crops meet in the rows as quickly as possible.