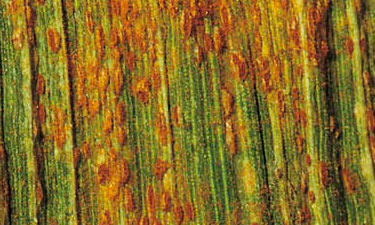 What is Brown Rust?

The rust fungus can only grow on green plants.  It survives the harvest period on late tillers and then spreads via volunteers and air-borne spores to the subsequent crop. Warm temperatures (15º to 22º C) with high humidity aid disease development, while dry windy days aid spread.  Late doses of nitrogen also favour brown rust attack

How to spot Brown Rust 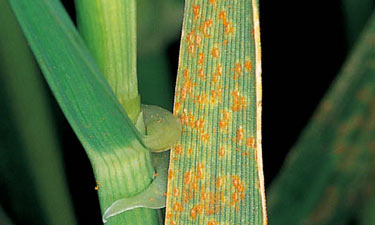 Close up of brown rust pustules

First symptoms are scattered orange-brown pustules on leaves and occasionally on the stems, leaf sheaths and ears.  Pustules often develop a yellow halo on barley.  Small black pustules also develop on the underside of the leaf and give rise to the infective spores.

How to control Brown Rust

Barley brown rust is much easier to control than wheat brown rust due to the softer leaf tissue being more easily accessible to fungicides.  A well-timed protectant fungicide based on prothioconazole and designed to control Rhynchosporium and net blotch, such as Fandango (prothioconazole + fluoxastrobin), will generally take care of brown rust.

For crops with higher yield potential or those which are under increased disease pressure SiltraXpro (prothioconazole + bixafen) has been shown to boost yields even further than Fandango.

Find out more information on the key disease threats to your barley crop. For each disease you will find out the importance of the disease in terms of potential yield penalty, how to identify the disease in its early stages and our advice on the best control strategies.