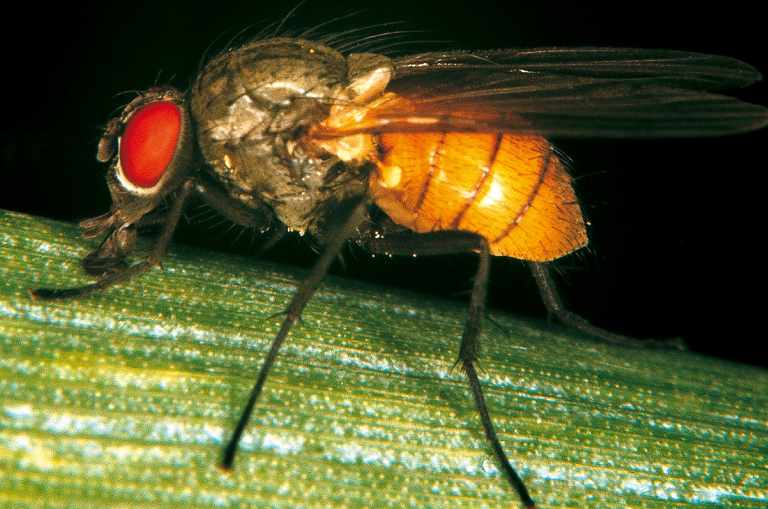 The adult flies are similar in appearance to the common house fly, although they are slightly smaller. The maggots are also small, up to 12mm, white and legless with a darker pointed head end. These burrow into young emerging seedlings of wheat, rye and barley just below ground level.

The feeding on the central shoot causes yellowing and the typical ‘deadheart’ symptoms. On inspection the maggots can be found feeding in the base of the plant. Maggots can continue to feed on adjoining tillers or move to neighbouring plants. Well established well tillered plants are more able to tolerate attack. Wheat crops following potatoes, sugar beet, vegetables, peas or bare soil as a result of set-aside will be most at risk. Barley crops which tend to be drilled earlier are usually less at risk.

Eggs are laid on bare ground or on soil between the rows of crops in late summer until early autumn. After a cold spell maggots hatch in late December to early February. Very cold conditions will delay emergence. In spring the fully developed maggots leave the plants and pupate in the soil. Adults emerge in mid-summer to lay eggs later in the year.

Wheat bulb fly can cause loss of tillers, and individual plant loss as well as subsequent bare patches in crops all of which can lead to loss of yield. Where egg numbers are high, late emerging crops can be completely devastated. Early drilled spring crops can be similarly affected. In Bayer CropScience trials seed treatments have been shown to increase wheat yields from 3.1 t/ha in the untreated to 7.0 t/ha.

Wheat bulb fly is mainly a pest of Eastern England. Levels of risk can be estimated by taking soil samples and counting the number of eggs present. It has been estimated that the number of eggs in the soil likely to cause economic damage is 2.5 million eggs/ha for normal sowing dates (250 eggs/m2) although this will be lower for later emerging or early sown spring crops. Numbers of eggs in the soil have been recorded well in excess of 10 million per ha! Soil sampling is not normally undertaken on individual fields due to cost. Various organisations monitor egg hatch at different locations throughout the UK and give updates on percentage hatch. At peak emergence growers have an opportunity to apply an insecticide such as chlorpyrifos to protect the cereal crop at ‘egg hatch’ or dimethoate can be applied later at ‘deadheart’ to control the maggot feeding in the plants. Insecticidal seed treatments should be used to protect crops in areas of high risk.