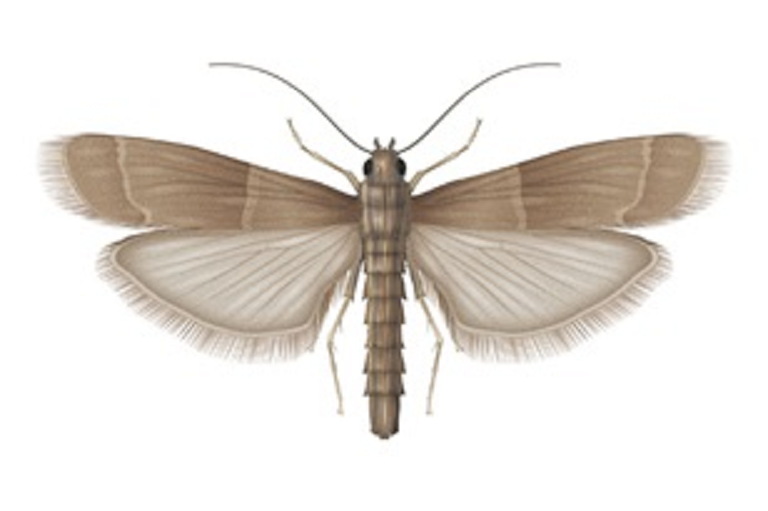 Moths can be found in a variety of stored products. The 3 more commonly encountered moths in grain stores in the UK are the brown house moth, the white-shouldered house moth and the Indian meal moth. The brown house moth has a 15-25 mm wingspan with upper forewing a dark buff- brown with black-brown spots. The white- shouldered house moth similarly has a 15-25 mm wingspan with upper forewing buff-coloured and speckled brown. It closely resembles the brown house moth, but can be distinguished because the head and thorax are covered in white scales. Both of these species are cosmopolitan and widespread. Brown house moth larvae are glossy white and reach a length of 16 mm. Those of the white-shouldered house moth are dull white and rarely exceed 14 mm in length. The Indian meal moth is smaller in comparison with a 10-15 mm wingspan. The inner third of the forewing is pale yellowish buff and the remainder bronze coloured. Also a cosmopolitan species which originated in South America and will survive all year round in warm conditions.

The brown house moth and the white- shouldered house moth both have similar life-cycles and mixed infestations frequently occur. The brown house moth lays up to 650 eggs, preferring rough open surfaces, whilst those of the white-shouldered house moth are sticky and laid in crevices. Larvae generally diapause for varying lengths of time, depending upon the conditions under which they have developed. Pupal cocoons are rough and incorporate foodstuff and debris. Indian meal moth females produce up to 500 greyish-white eggs which they lay on the surface of the grain and these hatch in 1-18 days depending upon conditions. The larvae migrate over the foodstuff, covering it with silk as they move. Their colour depends upon the type of food: they are generally dirty-white but may be tinged pinkish-brown or green. After 4-7 moults the larvae are fully grown and 12 mm in length. In this species food and environmental conditions have a dramatic influence on the larval phase, so that development may take 13-288 days. When mature the larvae leave the foodstuff and spin thick white cocoons, in which the 7 mm long pupae develop. After a pupation period of 12-43 days, the adults emerge. These moths may overwinter as larvae which diapause in a silken cocoon

Moth larvae can cause damage to stored goods by feeding or by contamination with webbing and frass though serious damage in grain stores is rare. Adult insects are not responsible for damage as they either feed on liquid food and water or do not feed at all. The white-shouldered house moth and the brown house moth both attack a wide variety of materials including cereals, cereal products, textiles, leather and cork. They are also found in animal feedingstuffs and poultry houses. The brown house moth tends to scavenge whilst the white-shouldered house moth is generally found infesting food. The Indian meal moth is a particular problem of the dried fruit industry. It will also attack cereals, oilseeds and shelled nuts. Larval webbing may occasionally reach problem proportions. Other moths encountered include warehouse moths (Euphestia cautella), rice moths (Corcyra cephalonica) and grain moths (Sitotroga cerealella).