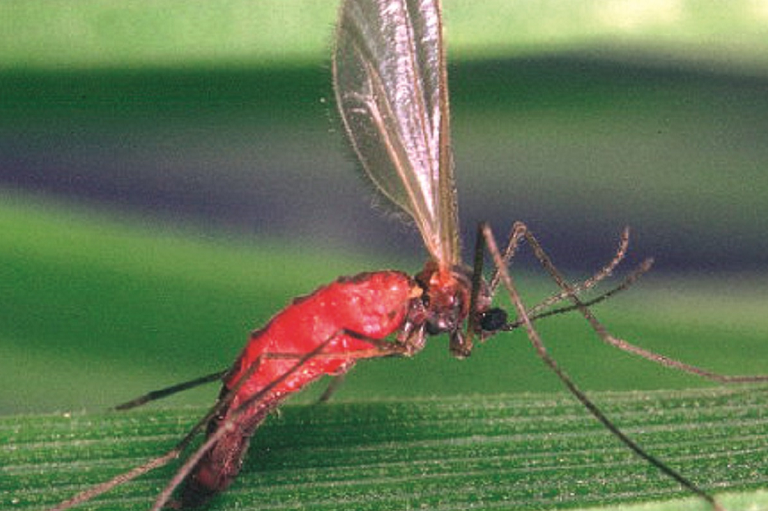 The adult midges are red and up to 5mm long. The larvae are whitish at first but later develop their characteristic orange/red to red colouration, they are also up to 5mm in length.

The red coloured larvae tunnel underneath the leaf sheaths feeding on the stem tissue. The effect of feeding results in galls which can easily be seen as saddle shaped depressions which are indented at the centre and swollen at both ends. These can usually be seen on the upper three internodes. These growths weaken the stem and restrict the flow of nutrients to the ear which can develop a ‘bleached’ appearance. Where numerous galls have formed the stem can be damaged, particularly in barley, to the extent that it breaks with the ear falling to the ground.

Adults emerge from the soil in warm conditions in late May and after mating the females lay eggs in red lines or ‘grid shaped patterns’ along the veins of the upper leaf surfaces. The emerging larvae burrow beneath the protection of the leaf sheaths to reach the upper internodes. In July, and when fully fed, they migrate into the soil where they overwinter until late spring when the adults emerge after a short pupation period (7 days). There is only generation per year.

The saddle gall midge is an important pest in many cereal growing regions of northern Europe. In the UK the saddle gall midge was more conspicuous in the late 1960’s and early 1970’s. It occurred in certain hotspots on heavy clay soils in the cereal growing areas from the south-east to the north east of the country. In recent times the pest has only been encountered occasionally (Lincolnshire 2004) and not at economically damaging levels. More recently in 2010 there were reports of activity in localised areas of Yorkshire and parts of Buckinghamshire. It has been estimated that this pest can cause wheat yield losses of up to 10 % and in barley attacks can predispose the crop to lodging.

Host plants include wheat, barley, oats (to a lesser extent), rye and other grass species including common couch. The midges do not travel large distances and are generally confined to individual fields. Therefore crop rotation (non-cereal crops) can successfully reduce populations. On the Continent, in the high risk areas, insecticides are directed against newly hatched larvae as they migrate from the egg laying to the feeding sites. When used on the Continent Decis has proved to have useful activity against this species.