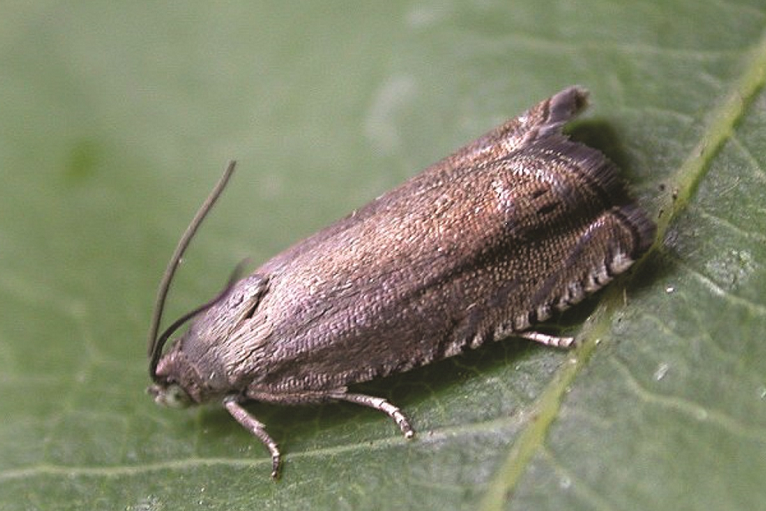 The pea moth is an inconspicuous moth which is brown in colour with black and white bars on the leading edge of the forewing (see picture). The wingspan is up to 16mm. The caterpillar is a creamy white/yellow with a dark head and when fully mature is 12-15mm long.

The caterpillars feed on the developing peas in the pods, they also leave frass which contaminates the end produce. 1 or 2 caterpillars may be found in a single pod. Within each pod 1 or 2 individual peas tend to be partially eaten and attacked pods may develop a yellow appearance and ripen early.

The adult moths emerge from cocoons in the soil from early June onwards and after feeding on the plant flowers the females lay eggs on the pea plant leaves (underside), petioles, stems and flowers. The eggs are less than 1mm and flat on one side. After 7-10 days the caterpillars emerge and burrow into the pods to feed on the developing peas for periods of up to a month. The caterpillars grow by a series of moults and when mature the caterpillars eat their way out of the pods, usually in August, and overwinter in the soil in a cocoon. There is 1 generation per year.

Pea moths are widely distributed throughout the UK. Pea moth damage has greater impact on quality rather than yield especially when peas are being grown for human consumption or for seed.

Determined by in-field pheromone traps. PGRO provide advice on the timing of sprays.