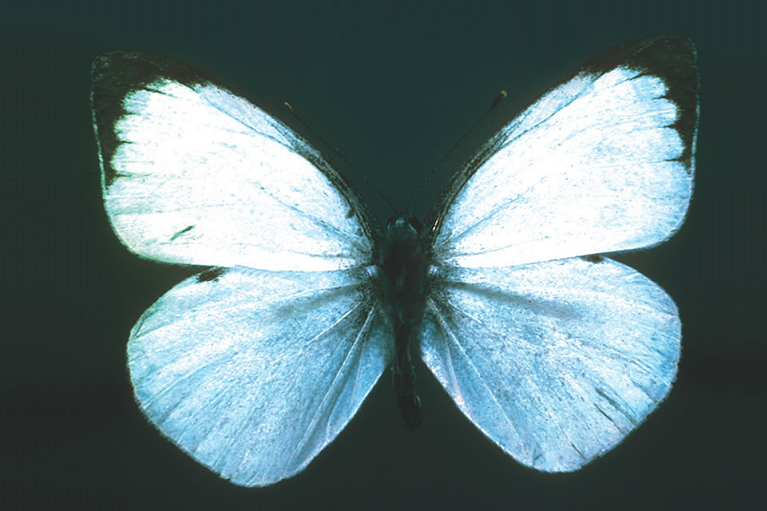 Cabbage white butterflies and their caterpillars will be very familiar to all growers of cruciferous crops. The adult male form of the large white has black margins on the tips of the wings whereas the female can be easily distinguished by the addition of 2 large black spots on each forewing. The wingspan is 5-6.6 cm. The caterpillars are hairy and black/dark green with yellow longitudinal and black stripes and are up to 5 cm in length.

The pest overwinters as a pupa and emerges in late spring to lay groups of yellow conical shaped eggs on the undersides of brassica leaves such as cabbages, Brussels sprouts, kale, swedes, nasturtiums and wallflowers. After a period of 14 days the caterpillars emerge and start feeding on the host plants. The caterpillars moult as they grow and when fully fed the caterpillars seek crevices in sheltered places to pupate. There can be up to 3 generations per year, the first is on the wing in May/ June, the second in August and the third in September/October. The adults can fly over distances of hundreds of miles and every summer the UK population is reinforced by new arrivals from the Continent.

The developing caterpillars feed in large groups and can very rapidly reduce host plants to veined skeletons. Tunneling activity into the hearts of plants can act as an entry point for fungal diseases and when combined with the additional problem of caterpillar excreta, crop marketability can be severely adversely affected.

Cabbage whites are an important pest of brassica crops and should be controlled when numbers first start to establish. NB: Large whites are generally less of a problem than small whites. Although plants can be skeletonised, few are generally affected. Small whites lay small numbers of eggs per plant but a greater number of plants can be infested than with large whites.