What is Fusarium Foot Rot? 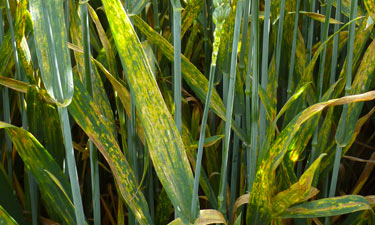 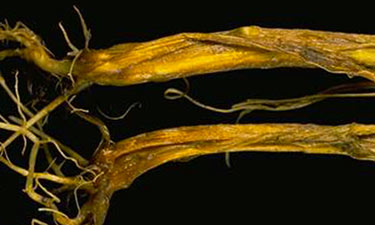 The most common component of the brown foot rot fungi is Microdochium nivale. This disease is largely seed-borne, but also arises from infected crop debris. Infections occur in the autumn, with the disease progressing in warmer, drier soils between 10-15°C. Stem base infections can give rise to perithecia under moist conditions in May, which release ascospores to either infect flag leaves and/or ears at anthesis - both of which also require high humidity.

For all foot rots, the life cycle takes around 14 days under optimum conditions, but severe infections can take weeks to develop. 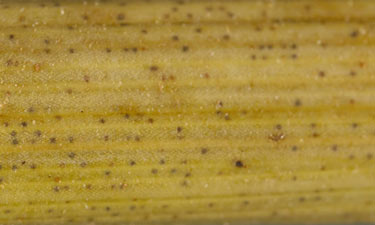 Perithecia on the leaf sheath

Other true Fusarium species such as F. graminearum, poae and avenaceum are only occasionally encountered at the stem base. In all cases, mycelium grows directly onto plant roots or stem bases to infect them. Spores can then be splash-dispersed to surrounding plants.

Seedling infections (Microdochium nivale) can result in poor growth of foliage and root systems, with an impact on final ear development.

Often it is difficult to visually discriminate from other stem base complex diseases such as early eyespot infections. Definition of the average yield impact of Microdochium nivale and Fusarium culmorum foot rot infections remains difficult, but could be as much as 20% where infections are severe enough to cause lodging and whiteheads. More importantly, these infections are a key source of inoculum for ear blight infection, which in the case of F. culmorum can reduce yield by up to 30%, plus associated mycotoxin contamination of grain.

For Microdochium, ear blight infections tend not to have such a yield impact (ca 10% in severe cases), but seed infections remain a key issue for reduction of germination and vigour.

How to recognise foot rot symptoms

Most common early symptoms are dark brown streaks on seedling leaf sheaths as shown above. As the infection progresses, these become water-soaked at stem bases and extend up the first internode. Infections at the ligule then transfer mycelium onto newly emerging leaves, and the fungus is transferred up the growing plant.

How to manage Fusarium foot rot

Seed treatments such as Redigo will help reduce Microdochium seedling infection in the autumn. Azole fungicide prothioconazole has the broadest spectrum activity on all true Fusarium species and Microdochium nivale, with proven credentials for spring inoculum management of F. culmorum (Fera and HAUC trials 2008-2012) as well as good reduction of true eyespot species and excellent activity aganst Septoria, yellow rust and mildew.

The key wheat fungicide timing for the reduction of Fusarium foot rot is at T1, where 0.55L/ha of Proline or 1L/ha of Aviator235Xpro will deliver the 150g/ha of prothioconazole that provides the best available control of stem base diseases.