What is Brown Rust? 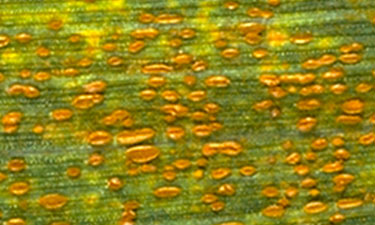 Ideal growth conditions are 15-22°C and with free water. Dry windy days aid spread, and the disease is favoured by late nitrogen applications. Brown rust is  killed at less than 5°C and inhibited at temperatures above 25°C, so hot summers and cold winters reduce inoculum. It has a 7 day optimum cycle in mid to late summer.

Brown rust is very different from yellow rust in its infection process. It's around eight times more efficient at getting into the plant than yellow rust, because germinating spores have sensing and orientating mechanisms that identify ideal entry points into the leaf. Once inside, it produces very waxy and compact pustules deep inside the leaf that are harder for locally systemic fungicides to target, compared to the more superficial and 'loose' pustules of yellow rust. Brown rust tends to present more of a challenge than yellow rust for control. 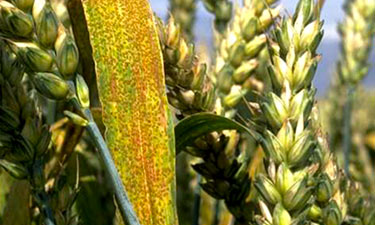 Severe brown rust infections take out significant green leaf area and reduce the rate of photosynthesis needed for grain fill, and increase the rate of transpiration to cause drought susceptibility. Grain shrivel and specific weight reductions reduce both yield and quality.

Average yield reductions from difficult infections are around 15%, but severe infections can reduce yield by up to 40% .

The % yield loss from brown rust infections can be roughly calculated using the formula 0.4 x % flag infection at GS75.

How to recognise symptoms of brown rust

Seedling infections are much more easily confused with yellow rust than on more mature leaves. Brown rust has randomly scattered discrete orange-brown pustules that are more rounded and compact. Yellow rust pustules are formed in stripes, and are a more yellow-orange hue. Individual pustules are themselves elongated.

How to control brown rust

Effective brown rust control comes from a programmed approach to minimise any early season inoculum and from protectant sprays, since the disease is very difficult to eradicate once established in the crop. At T2, when brown rust is most evident, aim to spray at GS37-39 or when the flag leaf is just fully emerged. If brown rust is established on leaf 2 and the flag leaf isn't fully emerged at the time of spray, brown rust will colonise the new tissue because fungicides only move from leaf base to tip. Also, if sprays are left too late, even the best brown rust fungicide will struggle to keep difficult infections on susceptible varieties under control.

Our recommendation is to use 1L/ha of Aviator or 1.2-1.5L/ha of AscraXpro. These T2 Septoria and yield-building fungicides are both highly active on brown rust and do not require additional strobilurin. Where Aviator235Xpro or AscraXpro are not being used at T2, the addition of rust active strobilurin is a wise precaution.

An application of 1L/ha of Aviator235Xpro or 1.2 L/ha of AscraXpro will provide excellent control of brown rust at T2. If the disease is already visible at T2 then the omission of CTL and the addition of rust active strobilurin is a wise precaution.  At T3, if brown rust is a threat, then the inclusion of tebuconazole or fluoxastrobin with an application of prothioconazole is advised.