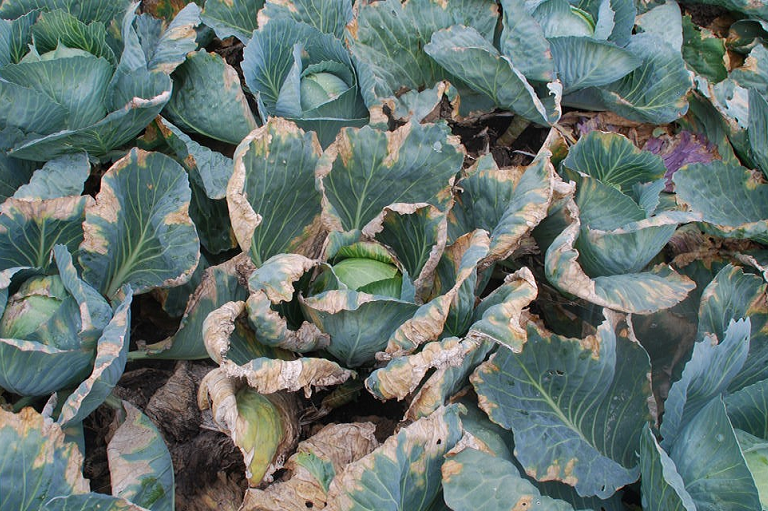 Symptoms are initially expressed as 'v' shaped lesions of the leaf margins and a blackening of the veins and the vascular system in the leaves, stems and roots (hence the name black rot). Eventually whole leaves can yellow, wilt and die back. The seed can be infected by the bacteria moving through the vascular system into the flowering parts.

This is principally a seed-borne bacterial disease which is the main source of infection and it passes from the seed into the crop seedlings as they emerge. It can survive both `on` and `in` the seed but this can be controlled using hot water treatment of seed. It can also be passed from plant to plant by rain splash or wind blown water droplets , gaining entry through the stomata or via wounds/abrasions on the plant surface. Another common method of entry into the plant is via the leaf hydathodes (water pores) which exude plant sap in early morning. Thought to have a short persistence in the soil, up to 6 weeks, but can survive for up to 2 years in crop debris.

An economically very important worldwide disease affecting all species of cultivated brassicas. A particular problem in countries where clean seed is less readily available and where brassica crops are grown in short rotations.

Find out more information on the key disease threats to your field brassica crop. For each disease you will find out the importance of the disease in terms of potential yield penalty, how to identify the disease in its early stages and our advice on the best control strategies.