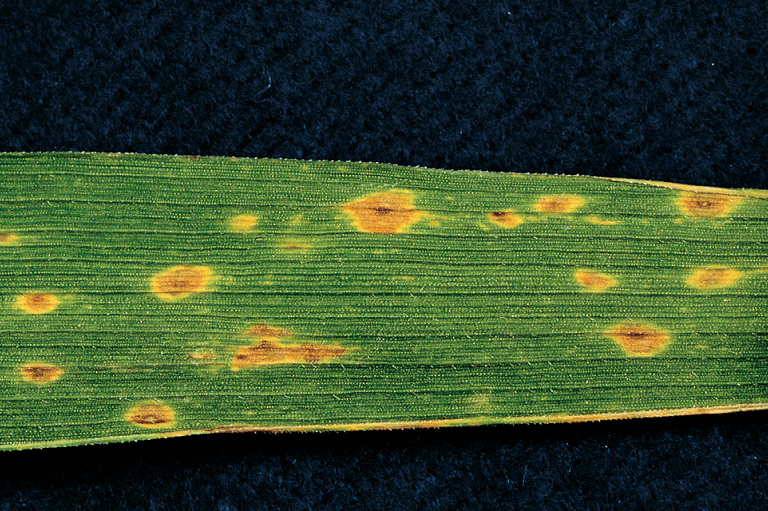 Initially seen as light brown flecks which are difficult to positively identify and these develop into the more characteristic symptoms of diamond or oval shaped lesions which are tan coloured with a surrounding yellow halo and a dark spot in the centre. These lesions are very similar to Septoria nodorum but they can be differentiated by molecular diagnostics. As the lesions enlarge they coalesce to produce larger areas of dead leaf tissue.
After harvest raised pseudothecia fruiting bodies can clearly be seen on the crop stubble. To the touch these give the stems a rough `sandpaper` like feel.

Spores from these pseudothecia release ascospores which are dispersed by wind or rainsplash. After successful invasion of plant tissue further spread within the crop, or adjacent fields, is by means of conida (a different spore type) which are also spread by wind or rainsplash. Prolonged leaf wetness is necessary for successful germination and infection of a host leaf.
The disease can also be seed-borne.

Prolonged, warm, wet weather with prolonged leaf moisture (for periods of up to 24 hours).

Commonly occurring in countries such as Denmark and France and widespread outbreaks were reported in Scotland in 2010 and 2011. Yield losses of nearly 50 % have been recorded from countries overseas such as the USA.