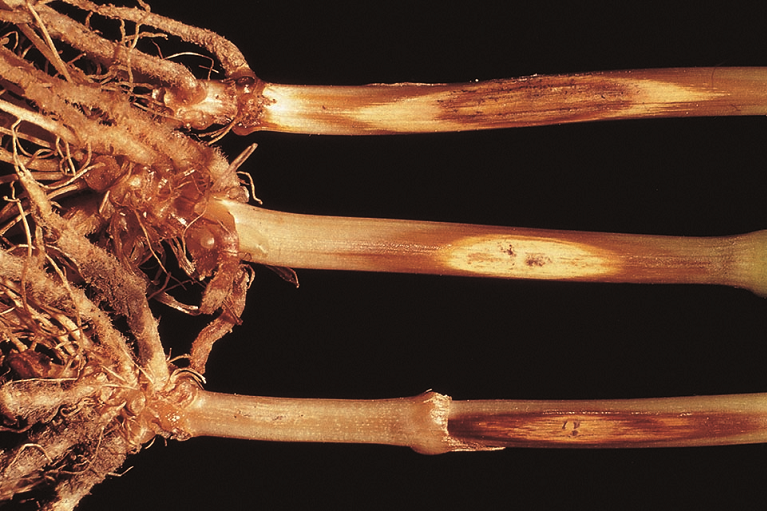 Symptoms are notoriously difficult to assess, especially early season R-type infections. This species can progress through basal leaf sheaths without much visible footprint, but still impedes nutrient and water flow. The W-type tends to form visible lesions earlier in the season, although these are often less damaging. Lesions are dark brown bordered and lens-shaped, with a pale brown centre with small black pinhead clusters (the compound appressoria or structures used to penetrate host plants). The latter can often be seen on successive leaf sheaths in early seasons, in the absence of visible browing. R-type infections can be very aggressive, and the disease progresses through successive leaf sheaths with much less visible lesion than the W-type. This can lead to misleading interpretation of fungicide activity, if visual assessments are not combined with yield data. Whilst eyespot lesions seeded from rain-splashed vegetative spores (conidia) are places close to the base of the plant, those arising later season from airborne sexual spores (ascospores) can be much higher up the stem. Plants attacked may develop characteristic 'whiteheads'.

This disease is widespread in the UK, but more prevalent in the wetter west and the north of England. True eyespot survives up to 3 years on infected stubble, as well as on volunteers and grass weeds (Elymus repens). It is mostly dispersed by rain splash conidia (vegetative phase), but ascospores from apothecia on standing stubble are also an infection source. Ascospores can travel long distances by wind. Levels of inoculum build up in the soil and second or subsequent cereal crops are most vulnerable.

The ideal growth temperature for true eyespot is between 5-13C, growth is inhibited above 16 & 17C. Free water is essential for infection, and the disease is favoured by wet soils and high nitrogen. Under optimum conditions, true eyespot can complete its vegetative life cycle in 15 days, but it can take up to 8 weeks for infection to pass through the leaf sheaths to the stem. The sexual stage, whereby apothecia are produced in standing stubble towards the end of the season, can take several weeks. The infection is heaviest on early drilled, lush crops particularly on compacted, cold wet soils. Excess nitrogen and susceptible varieties increase the risk.

This disease is widespread in the UK, but more prevalent in the wetter west and the north of England. Yield reductions average about 5%, but in severe infections, these can be as much as 40%. These losses are due to impeded nutrient flow to the roots and water/N to the leaves later in the season. This leads to stunting, poor root systems with associated low drought tolerance, and whitehead formation. This can be further compounded by crop lodging as basal lesions cause stem breakage.