The UK’s potato area is expected to fall in 2020 as growers face up to tighter margins arising from higher input costs and the prospects of flat output prices. Such despondence is likely to be compounded by a greater reluctance to carry the weather risk after one of the wettest autumns on record left swathes of the crop unharvested.

“There will be growers who, when they look at the 10% of their crop that is still under water, will simply not accept the risk of a late-lifting crop,” says Mark Stalham, Head of NIAB CUF.

“There will be some big growers who either leave the sector this season or decide that this is a good year to take a hard look at the economics of their potato production before committing to 2020,” he adds. 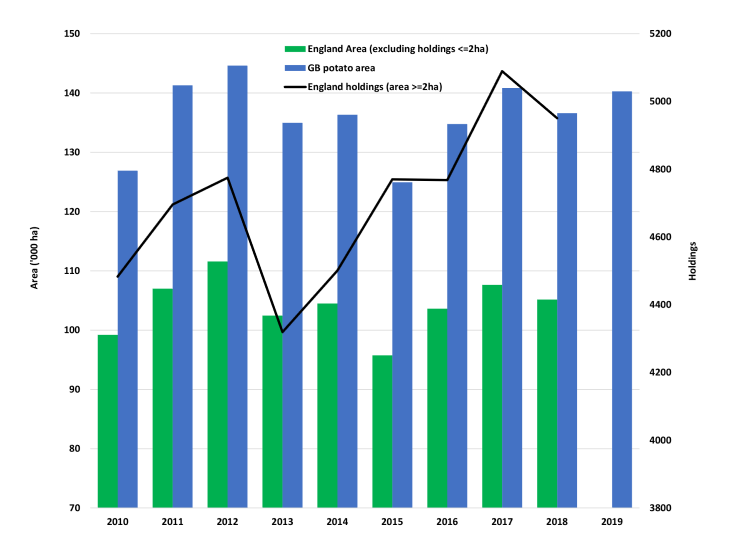 Growers seem willing to ride the fortunes of potatoes, but will adjust their area according to the market outlook   Source: DEFRA

While there are many growers who would rather forget 2019, its impact on the season ahead cannot be overlooked. Met Office rainfall data for England reveal that autumn 2019 was the eighth wettest since records began in 1862 with 348mm compared with an average for the 30 years to 2019 of 249mm. 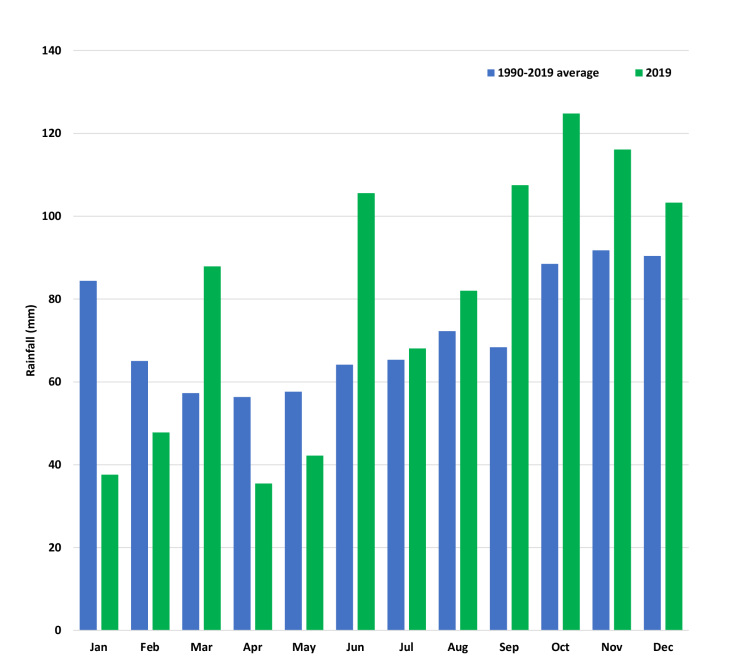 Rainfall in England: the wet autumn of 2019 more than made up for the dry start to the year   Source: Met Office

Both 2018 and 2019 were favourable seasons for aphids so there is an increased risk of virus-infected seed stocks. Couple this with the mild weather heading into the 2020 season and there is even greater risk of virus spread.

“While seed crops are inspected before harvest, there is a risk that some infected seed stocks will make it through. At the CUPGRA Conference in December, SASA predicted the potential for virus Y in 2020 would be 16%, far greater than we have seen in recent years and should not be overlooked.

“Fortunately, growers seem aware of this risk and at NIAB CUF we have received more seed for testing this season than we have in many years, as will have SASA and FERA.

“The consequence of increased risk of both virus and disease is likely to be tighter seed availability and more expensive seed.  This will feed through to increased costs of production and pressure on margins.”

Planning for a late start

For growers in East Anglia, February is typically the driest month of the year, but with 2020 carrying on where 2019 left off, it seems inevitable that potato planting will be later than normal this season. For Dr Stalham and his colleagues at NIAB CUF, this has led to growers asking two questions:

First, where are the margins going to come given the increased costs of productions; and second, what should be done to counteract a potentially difficult planting season?

“With many fields beyond the point of saturation, it will be some time before land is in a state where planting can commence. As a grower, the first point to note is that, you still need to be out of the field by the same date at the end of the season, irrespective of planting date. This means facing up to a shorter season and the management implications this carries,” says Dr Stalham.

For growers in East Anglia, October is typically the wettest month of the year so Dr Stalham advises growers to finish lifting by 23rd October, when tuber temperatures drop below 8 °C, increasing the risk of bruising.

“Don't rely on October this year being dry just because it was wet in 2019. You may get away with it one year, but don't try to game science. Work towards 23rd October and not 1st November, and allow time for breaks in harvesting,” he says. 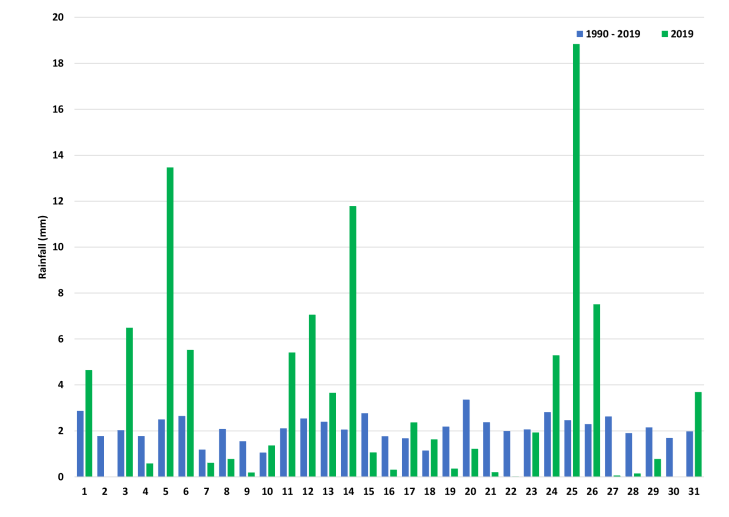 As seed gets older, the number of stems it is likely to produce increases. The exact rate of increase varies depending on the variety and seed size, but as a rule, growers should be prepared to increase seed spacing the later planting occurs.  Working out the precise spacing is best done in consultation with experts.  An example is shown in the table below.

“Such changes may appear subtle, but it is central to maximising the marketable yield by increasing the amount that falls within contract specification,” he says.

A shorter season means fewer growing days, but don’t be tempted to maintain nitrogen rates in hope that the crop will miraculously make up for lost time.

“Everything else being equal, for every day that the season shortens, reduce the nitrogen to be applied by 1kg/ha. Applying more than is needed will not benefit the crop during the growing season, but keep the crop green longer towards the end of the season. This is when you want it to be dying back and making desiccation easier,” he says.

Despite current conditions, irrigation will be important this season as growers seek to reduce the likely impact of compaction and the risk of skin diseases.

“Compaction is an issue many growers will need to address with smaller, more frequent doses of irrigation  at some point, but managing irrigation scheduling to minimise the risk of common (and powdery) scab and black leg will still be vitally important in the period after tuber initiation,” says Dr Stalham.

The loss of diquat has stimulated interest in flails, but what about other desiccants?

“The alternatives to diquat work, albeit they are not quite as rapid despite being four to six times more expensive, but they need more time to work. This means timing of application in relation to weather and crop development and water rates need considering too.

“Nitrogen is central to success. At NIAB CUF and CUPGRA we have said for many years there is an opportunity to reduce nitrogen applications, in many situations, by 20-30 kg/ha without losing yield. With the loss of diquat this has received greater attention because to get the crop to a point where it can be harvested, we need to stop it growing and the alternatives work better when the crop canopy is close to the onset of natural senescence.  We can manage this effectively with nitrogen application rates.”

Growing for the market

The UK is a net importer of potatoes. It enjoys an enviable reputation for seed and exports about 90,000 tonnes each year. The raw equivalent of the processed products imported is equivalent to a little more than 50% of total domestic production (not including seed). Addressing this dichotomy, principally thorough better yields, will be central to efforts to restore value to a sector where margins are under intense pressure.

“The par-fried processing sector is perhaps the one market we can look to for significant growth whereas the crisp market is static and pre-pack continues to be under pressure from more convenient and more consistent carbohydrate alternatives,” says Mark Stalham of NIAB CUF.

“Even though as a sector, processing is growing, the contracts available often don't appeal to growers and the varieties tend to favour sandy soils with irrigation where high yields can be achieved. Late season varieties, such as some major processing types, often come with increased risk to the grower. October is typically the wettest month of the year and yet it is when most growers expect to lift potatoes.”

The challenge facing the pre-pack sector is to deliver a product that the consumer wants against the backdrop of a general fall in vegetable prices.

“One of the greatest problems in addressing the appeal of pre-pack is delivering a consistent product with valued characteristics. It is not helped by the move to generic ‘whites’ potatoes as a commodity,” explains Dr Stalham.

“Instead we need to investigate varieties and growing techniques that support the production of a crop that is consistent in size, shape and cooking quality, while simultaneously investigating innovations that enable potato to be cooked in a time similar to that needed to cook pasta.”

Most potatoes are stored before they reach the consumer but doing this without an effective sprout suppressant is difficult.

“It is frustrating that sprout-suppressant products available to our competitors in Europe or North America are not approved for use in the UK, and this is especially so with processing crops,” says Dr Stalham.

What is important to this farmer when choosing tuber treatments in potatoes?

The threat of Rhizoctonia solani is such that few growers would dare to overlook its potential to reduce yields and quality.