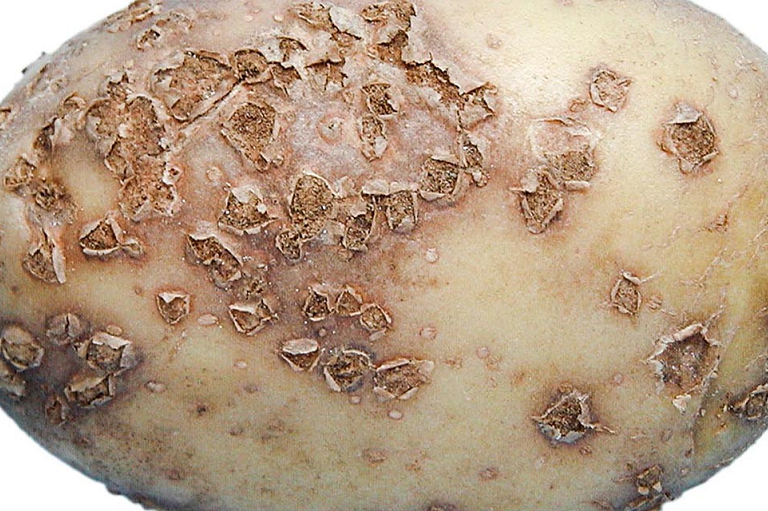 Circular pustules on the tubers. Shreds of skin remain around the pustules after they rupture. Infected tubers can be highly misshapen and small galls can be found on the roots. Can be confused with common scab but the lesions of powdery scab tend to be larger and merge to form large `scabs`.

The `powder` is comprised of a mass of spore balls (cystosori) which are released into the soil, where they may survive for up to 10 years. These release zoospores which can move in water over short distances to infect the new crop. The tuber responds by producing corky tissue to halt the growth of the disease. This fungal pathogen can sometimes carry and transmit spraing (mop top). Spread is by diseased seed or can be soil borne being spread through manure from stock fed with diseased tuber.

Cool, wet growing conditions and heavy, alkaline soils or excessive irrigation. Powdery scab became prominent in the UK when the highly susceptible variety Pentland Crown was widely cultivated. This variety was popular in the 1970`s for its high yield and even sized, marketable tubers. Once established it continued to survive and flourish on succeeding susceptible varieties.

This disease reduces crop value as it causes cankered and misshapen tubers both of which adversely affect marketability.