Average wheat yields on UK farms have plateaued in the past decade, but some growers are bucking the trend with record-breaking crops.

In 2015, Northumberland grower Rod Smith entered the Guinness Book of Records with a yield of 16.52 t/ha. Most recently, in 2017, New Zealand farmers Eric and Maxine Watson achieved an even higher average yield of 16.791 t/ha across an 11.89 ha area of Oakley grown on their 490 ha farm at Wakanui, Canterbury.

Both are way ahead of average farm yields and the five-year mean in Recommended List trials of just over 11 t/ha. 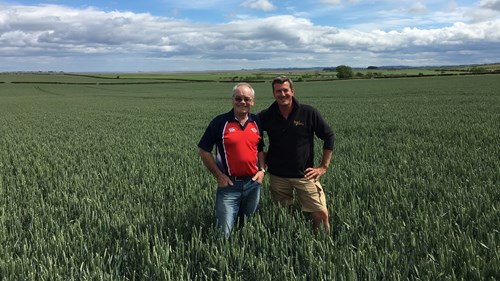 Of course, favourable weather played a part in the yields, but it is the attention to detail across every aspect of crop husbandry that sets both farmers apart.

In this article, you’ll get a clearer idea of the smart decisions that contribute to such a high-performing crop.

Choosing the right variety is key

“Flowering is the most important event in any variety’s life cycle, but not all wheats are equal. Mis-flowering, where not all seed is set, affects many crops including wheat. It’s no coincidence these world records were set with Dickens and Oakley, which both have good flowering characteristics.”

Growers should understand a variety’s genetic background and look for consistent performance, he says.

Strong foundations will set you up for success

Early establishment into a well-prepared seedbed is fundamental to building a robust crop with high yield potential, so it is worth waiting for optimum conditions.

“We were lucky the weather allowed us to create ideal seedbeds and crops tillered well,” says former record-holder Rod Smith.

“Throughout the season rain came at the right time and we never had any extremes to disrupt growth.”

Mr Watson’s crop was sown after red beet in mid-April 2016, equivalent to mid-October in the UK, while Mr Smith drilled his Dickens on 22 September, after a preceding spring beans crop.

Healthy, well-structured soil is essential for allowing good seedbed creation and both farmers favour non-inversion tillage ahead of cereals. Mr Smith has also switched from 24m to 36m tramlines to reduce compaction and adds composted farmyard manure to improve structure and fertility on his heavy clay near Berwick, with targeted subsoiling where required.

He believes considerable yield can be lost by not addressing fundamental issues like compaction, and says yields increased around 6% by moving to wider tramlines.

Mr Watson’s winning crop had two passes with a Simba SLD and press, before sowing with an 8m Horsch Pronto.

There were different approaches to seed rates though. Mr Smith, who uses a Sulky Culti-disc combination drill with Kuhn power harrow, applies variable seed rates based on yield maps and soil conductivity testing, typically at 150-180 kg/ha for September-drilled wheat, with a target establishment of 300 plants/m2.

“We are reducing seed rates further each year but only if soil conditions allow. We sometimes struggle with establishment on heavy land in this region, especially if the weather closes in or drilling goes into late September or October,” says current record-holder Mr Watson.

Mr Watson prefers a lower 60 kg/ha rate, to give 110 plants/m2: “Our crops often put on too much growth which increases lodging risk,” he says. “Low seed rates are the best growth regulator we’ve got. We run seed over a gravity table to ensure we’re only sowing the best big, bold seed.”

Mr Angus believes UK seed rates are often too high, producing too many weak tillers, greater lodging risk and poor specific weight. “It doesn’t apply to all varieties, but with strong tillering types it’s possible to reduce rates by 10-15%.

Nitrogen, phosphorus, potassium, sulphur and magnesium are the main nutrients, but all macro/micro nutrients, trace elements, and soil pH, must be optimised for maximum fertiliser efficiency and yield benefit.

Nitrogen applications totalled 320 kg/ha for Mr Smith’s winning crop in 2015 (applied as split applications in liquid form), while 258 kg/ha went on to Mr Watson’s Oakley as three urea applications - this was on top of 100 kgN/ha of residual soil nitrogen. His phosphate was applied pre-cultivation in the autumn, while potash went on during the growing season.

Both growers stress the importance of trace elements such as zinc, copper and boron in keeping crops healthier and potentially less susceptible to disease. These are key requirements for good flowering biology, adds Mr Angus. They are also interested in future fungicide formulations with micronutrients included.

Seed treatments or starter fertilisers that encourage early root development, which in turn improves the crop’s ability to extract water and nutrients, are also worth considering, notes Mr Smith.

A green crop is a healthy crop

Mr Watson, who takes advice from Bayer Crop Science among others, adopts a 28-day programme, which, where possible, incorporates fungicides with at least two modes of action for exceptional disease control and resistance management. By protecting crops as close as permitted to harvest he aims to prolong greening to capture all possible yield.

A five-spray fungicide programme was applied to his record wheat crop, incorporating Prosaro, Aviator and a strobilurin fungicide. Given Oakley’s susceptibility to rust, seed was also treated with Galmano.

A robust PGR programme is an important insurance policy for keeping large crops standing, especially when combine yield meters are hitting 22-23 t/ha in the best patches. Mr Watson used two applications of Cycocel and Moddus applied at label rates at GS 28 and 31.

Mr Smith typically employs a four-spray fungicide programme plus seed treatment, which in 2015 retained enough green leaf to support a crop with an average 820 ears/m2 and 36 grains/ear by July.

SDHI chemistry is used at T1 and T2, which included Boogie at T1. He builds a fifth fungicide into the programme if weather and disease pressure dictates.

He reiterates the importance of accurate fungicide and PGR timing in capitalising on varietal flowering characteristics. “When PGRs are applied during stem extension the ear is developing quickly and is quite fragile, so can be damaged by being hit too hard or poor timing which disrupts flowering.”

He believes average yields of 17.5 t/ha are achievable, but this is close to the physiological maximum of conventional varieties. Biomass is the main limiting factor, although hybrid wheats may increase future yield potential, especially in more challenging growing conditions.

Want more advice and inspiration from experts at the forefront of farming? Sign up to our email newsletter using the button below to get smart farming tips straight in your inbox.

or the past three years, the Judge For Yourself trials have given farmers the opportunity to compare a range of T2 options against Ascra.

For latest advice and news for your wheat crop