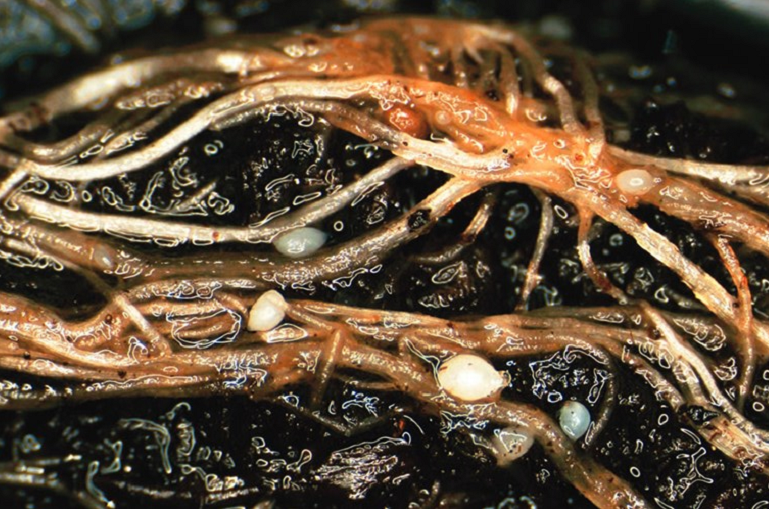 Small brown lemon shaped cysts can be found on the roots of affected plants.

The first signs of damage are patched of stunted plants with unhealthy foliage. The outer leaves wilt, turn yellow and die whilst the heart of the plant appears unaffected. To compensate for the damage to the rooting system the plants develop a mass of lateral root branches giving a 'bearded' appearance. Symptoms of beet cyst nematode can be difficult to diagnose and can be confused with Rhizomania. Where populations are high cysts can be readily found on the roots and soil sampling can confirm the presence of eggs and larvae.

The life-cycle can be completed in just 10 weeks. The cysts lie dormant in the soil overwinter and hatch in the presence of a suitable host crop. Young larvae, less than 1 mm long and not visible to the naked eye, penetrate the roots and start to feed. After fertilisation the females swell up and penetrate through the surface of the root into the surrounding soil forming cysts which at first are yellow/white and later mature into a leathery brown structure. Each cyst can contain up to 600 eggs, and these can remain in the soil for many years. There can be 2 generations per year. In the absence of a host crop the population declines by 50 % per year.

Beet cyst nematode was first identified on mangolds on a farm near Bristol in 1928 and was not seen on sugar beet until 1934 in a crop near Chatteris in Cambridgeshire. From here is spread throughout the beet growing area in East Anglia. Other host plants include fodder, red beet, mangold, turnip, swede, spinach, leafy brassicas, oilseed rape, mustard as well as arable weeds such as charlock, chickweed, fat hen and shepherds purse. As populations build up in the soil the economic damage to yield and sugar content increases.

Because of the rapid annual population decline growers can reduce the impact of this pest by increasing crop rotation intervals. Some estimates suggest that 20 % of the beet growing area is infested with beet cyst nematode. Soil samples can give an indication of soil populations and where numbers exceed 500 eggs and larvae per 100 ml of soil yield losses from non-tolerant varieties can be as much as 20 %. Tolerant varieties have been available on the Continent for some times and the first commercially tolerant variety for the UK was introduced for sowing in spring 2009. Newer higher yielding varieties which combine dual rhizoctonia and nematode tolerance are being developed for future release.