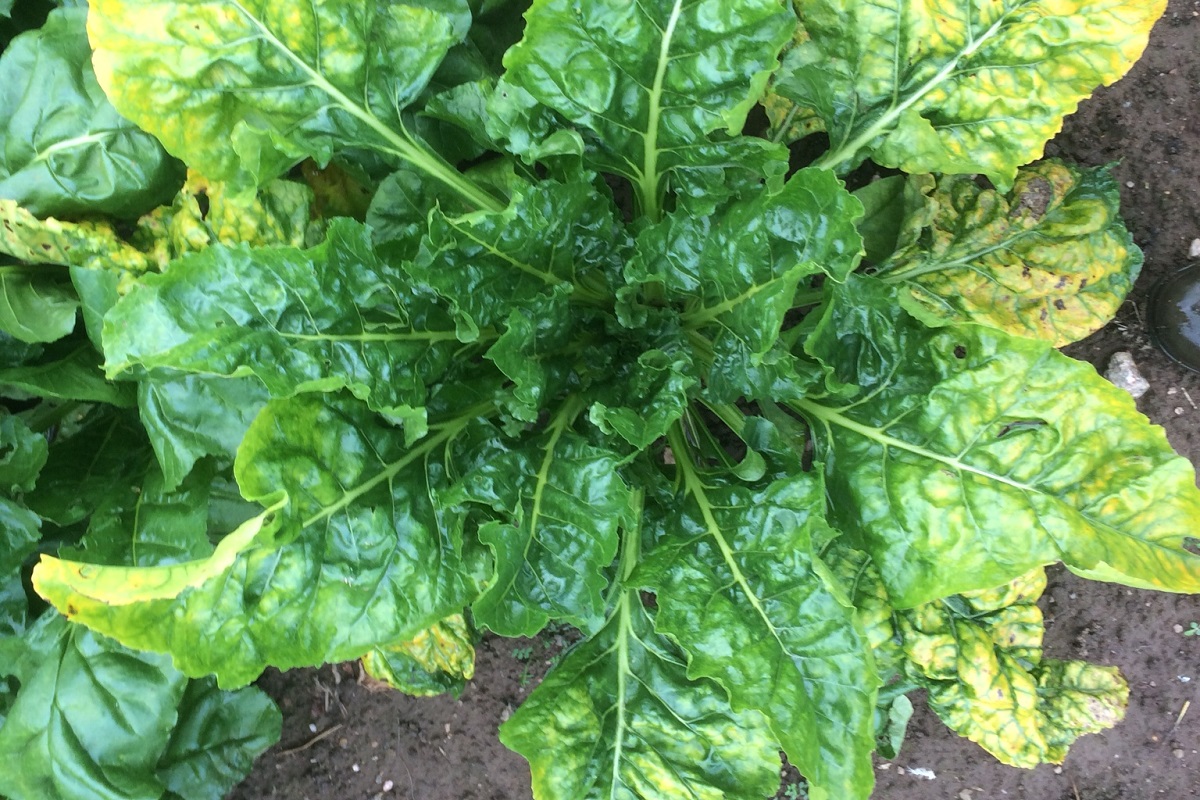 Circular yellow patches appear in the crop, usually in July and August. The outer leaves of infected plants are yellow between the veins, thickened and brittle.

There are three main yellowing viruses that damage the UK beet crop: Beet yellows virus, Beet mild yellowing virus and Beet chlorosis virus. Although not a true yellowing virus, Beet mosaic virus is found in sugar beet in the UK and can cause damage. The yellowing viruses are transmitted by aphids. Infections usually appear on individual plants or as small yellow patches in the field which expand as the season progresses and the disease spreads. Symptoms for all the viruses are yellowing between the veins followed by a thickening of the leaves which then become brittle. It can be difficult to tell which virus is present but laboratory tests and field diagnostic tests are available to differentiate between them. Beet yellows virus (BYV)

• BYV is the most damaging of the viruses, causing yield losses of 50 % when it infects the crop in early June. Infection reduces the photosynthetic area of leaves reducing yield and sugar content. In recent seasons BYV appears to be becoming more common, especially in Norfolk and Suffolk. Beet mild yellowing virus (BMYV)

• BMYV has been the most common yellows virus in recent years. It causes yield losses of around 22 % when it appears in early June. BMYV generally causes leaves to turn an orange-yellow colour, which develops from the tip of the leaves whilst BYV tends to cause yellow etching of the heart leaves. The infected leaf tips tend to die as a result of attack by secondary fungal pathogens and this can sometimes be visually confused with nutrient deficiencies. However, virus infected leaves will be brittle. Beet chlorosis virus (BChV)

• BChV was first reported in the UK in the early 1990s and produces very similar symptoms to BMYV. Early season infections cause slightly less damage than BMYV but BChV infections in late June are more damaging than BMYV. Beet mosaic virus (BtMV) • BtMV, like the yellowing viruses, can be transmitted by the peach-potato aphid but can also be spread by machinery, people or animals passing through the crop. As would be expected, BtMV has quite different symptoms to the other 3 viruses. Yield losses, whilst significant at up to 10 % or more, are lower than for the yellowing viruses.

The virus outbreaks of the early 1970`s caused severe yield losses and forced many growers to stop growing beet. The disease can infect entire fields and can cause sugar yield losses of up to 50 % in root crops. Earlier infections cause the most serious losses. Control of aphids was once reliant on foliar aphicides such as pirimicarb. These are no longer viable due to the widespread resistance in peach-potato populations.

Find out more information on the key disease threats to your sugar beet crop. For each disease you will find out the importance of the disease in terms of potential yield penalty, how to identify the disease in its early stages and our advice on the best control strategies.