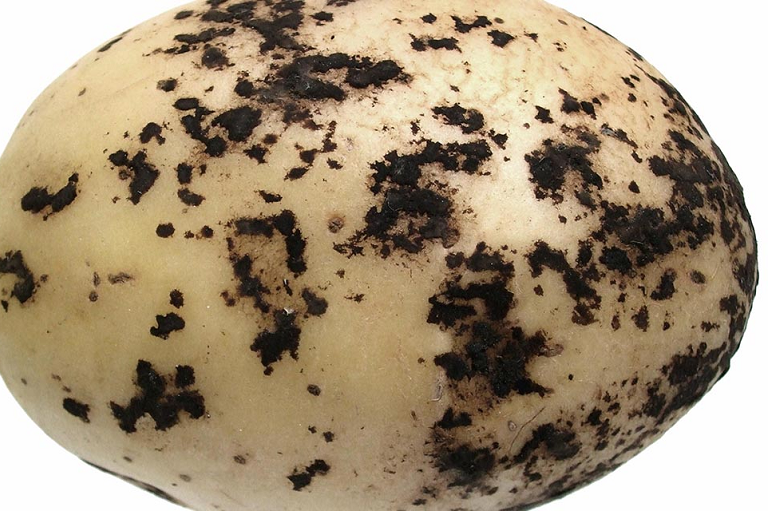 Black scurf is the tuber phase of stem canker. Superficial dark brown/ black particles (sclerotia) of variable size and shape that can be removed by rubbing or scratching with the thumb nail.

Infection by the seed and soil-borne fungus leads to the development of black scurf on tubers at the end of the growing season and during storage. Stem canker is also likely to develop in infected potato stocks which are planted. Black scurf can cause stolon pruning of the roots and shoots which leads to reduced tuber-set and consequently a wider range of tuber sizes at harvest.

Black scurf is found in all potato growing areas in the UK. Tubers with black scurf on the skin surface have an unsightly appearance and reduced value, but storage and cooking qualities are generally unaffected. Rhizoctonia is comprised of a range of distinct anastomosis groups (AG's) which are genetically diverse and have differing characteristics with regard to host range, survival and fungicide sensitivity. These can be identified by soil testing prior to planting.

For each disease you will find out the importance of the disease in terms of potential yield penalty, how to identify the disease in its early stages and our advice on the best control strategies

For farmers, agronomists or distributors with a specific agricultural or horticultural product-related query.