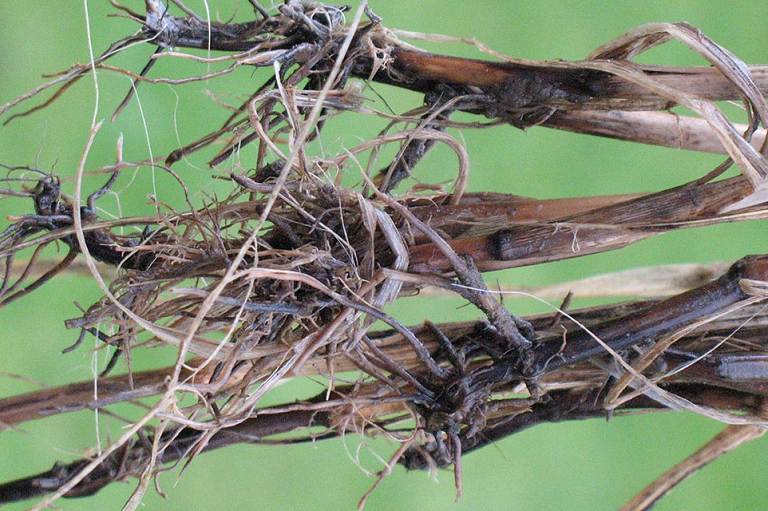 Infection comes mainly from root and stem base debris in the soil but grass weeds also contribute. The mycelium itself is persistent in the soil for up to 2 years. The inoculum builds up with intensive cereal cropping.

Autumn sowings are most at risk, especially in cold, wet seasons and in marginal soils with poor drainage and fertility. In good soils other micro-organisms and better root growth help reduce the damage caused by this disease. Optimum conditions for disease are a mild winter, a moist cool spring and a dry early summer. Light, alkaline soils can also be favourable for this disease.

Yield loss can be up to 50% in the third and fourth cereal crops and quality of grain is reduced with many shrivelled grains often parasitized by sooty moulds.

• Fungicidal seed treatment
• Strobilurin based fungicide, with activity on take-all, applied in the spring
• Delayed drilling
• Crop rotation
• Consolidated seed beds
• Avoiding continuous runs of winter wheat and ensuring rapid and healthy plant establishment by correcting drainage and soil structure problems helps minimise the effect of the disease.
• Including spring barley as a break crop will not lower the incidence of disease- spring crops can also suffer from take-all.
• Adequate applications of nitrogen in the spring helps the plant to overcome root loss due to the disease.

A phenomenon called ‘take-all decline’ occurs in successive wheat and barley crops when, after an initial increase for about four years the disease level reduces. This is believed to be due to the development of micro-organisms antagonistic to the take-all fungus. However, the decline is not great enough to allow the yield to recover to the level achieved by first year cereals.