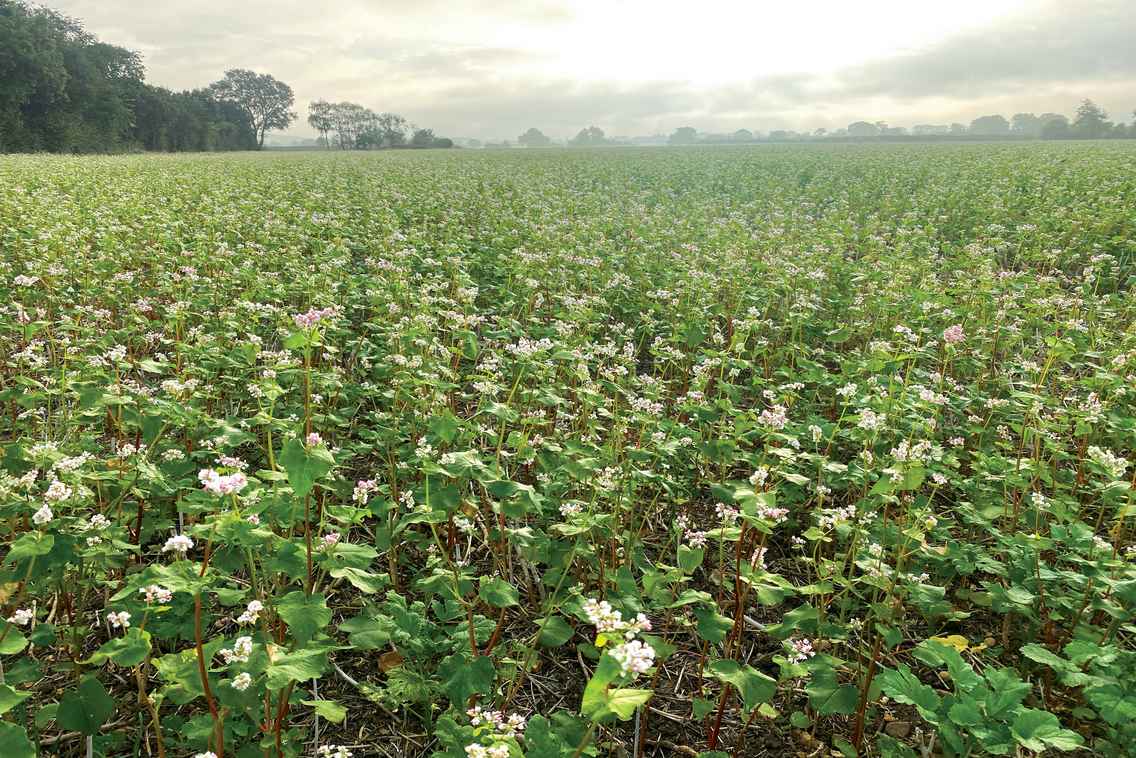 Companion cropping oilseed rape is just one part of a multi-pronged approach to beating cabbage stem flea beetle (CSFB) attacks during establishment for a grower in one of the original pest hotspots.

It is a tactic Russell McKenzie can’t see being without when growing the crop, albeit in conjunction with providing early nutrition to maximise its effectiveness. 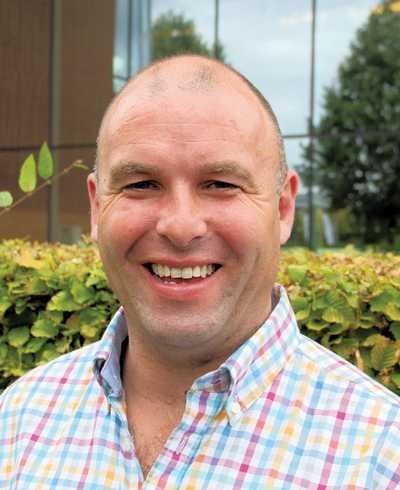 Unlike many in the A1/ A14 corridor, Mr McKenzie, who manages 900 ha on the Cambridgeshire/ Bedfordshire border for John Sheard Farms and DJ Tebbit, never gave up on oilseed rape during the difficult period immediately after the withdrawal of neonicotinoid seed treatments.

Farm yields have dropped from the highs of 4.5-5 t/ha during the 2010s to average around 3.6 t/ha in recent seasons, but, especially at current prices, it still represents the best break crop.

“We probably accept we’re not going to hit the highs of the neonic days,” he says. “We tend to carry some larvae in the outer branches, and not having that full canopy is probably where we’re losing some yield.”

A key change to keep the crop viable has been to extend the rotation to one year in five or six, which has reduced the area grown by 20-40% from a high of 250 ha.

One thing that hasn’t changed is the variety type – mostly hybrids – and seed rates. “I was always reluctant to use high seed rates to buffer the effects of flea beetle because it was negating what we’ve learned about thick stands not resulting in optimum performance.”

Going down that route would also mean moving away from hybrids, but Mr McKenzie feels hybrids were higher performing. “Obviously the risk is better because of the cost involved, but the establishment schemes breeders offer, mean you can offset that and choose varieties with better traits, such as Turnip Yellows Virus resistance, double Phoma and pod shatter resistance.”

Drilling date has been brought forward, like for many growers, to begin establishing the crop in early August.

“What I would describe as the optimum window a few years ago now seems to be the worst possible time.”

Soil moisture is the key driver, and in the past two seasons that has coincided with early August, so reluctantly he’s brought forward drilling, meaning following winter barley has become the best opportunity to establish oilseed rape. It is important to avoid the crop emerging when temperatures are rising in dry conditions as that is when they are most vulnerable, he says. 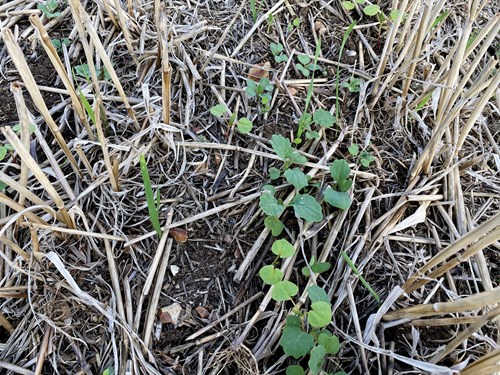 That is where companion cropping and digestate are proving valuable in providing a flea beetle deterrent and/or disguise while early nutrition also helps the crop establish more quickly.

“The digestate is really helping,” Mr McKenzie says. “It stinks, so I could understand why flea beetles might not like it.”

Sourced via Biogen, it provides N, P, K and trace elements and is applied either pre- or post-drilling. On one block where it wasn’t applied last autumn he lost two out of three fields, whereas everywhere else survived.

He has tried different mixes of companion crops in recent seasons. “The original idea was for something to act as a flea beetle deterrent, and also provide some nutrient back to the crop.

“We’ve learned that it works in helping the crop get established, but doesn’t really provide much readily available nutrient value in the short term, even if you have clover or vetch, as it’s not established enough to provide anything significant when you really want it early on.

“But in combination with nutrition, there seems a nice synergy between the two. It would also work if you went with a DAP approach, although I think we get a bigger bang for our buck with digestate.”

A mix of 50% buckwheat, 25% fenugreek and 25% Berseem clover sown at 10 kg/ha is Mr McKenzie’s usual combination. “Buckwheat is a great component, but alone it doesn’t seem to offer enough, and I’d advise against adding phacelia, again great in cover crops, but it’s just too competitive against oilseed rape.”

Fenugreek’s aroma is supposed to deter flea beetle, he continues.

“I’m not 100% sure if you get a full-on attack it will really do that, but the great thing about it is when you walk the crop in autumn you get this wonderful smell of curry powder.”

Buckwheat can help with phosphate scavenging, while having a combination of different rooting types is good for overall soil health, he suggests.

Those type of mixes cost around £23-25 /ha, coupled with the digestate cost of £50-60 /ha, but he says with oilseed rape being such a high value crop it is worth investing in getting it established. “We’ve been able to trim costs in other areas.”

“We have a hopper where we blow the companion crop just above the seeding coulters, and that gets worked in by the covering tines.”

Frost normally removes the buckwheat, while a November/ December application of AstroKerb takes out the other companions.

“I wouldn’t want to plant any oilseed rape crop without companions now,” he concludes.

Agrii has trialled drilling the cover before oilseed rape, which can work, particularly in a low disturbance direct drill system. But as well as the logistical practicalities of two operations in a busy period, it also risks losing seed-bed moisture.

That system is being used in ADAS trials as part of an AHDB and industry funded project ‘Reducing the impact of CSFB on OSR’. The project is looking at the efficacy of different tactics, including companion crops, explains Sacha White, principal research entomologist for ADAS.

In the two years of trials, drilling a companion crop around a week before oilseed rape has significantly reduced flea beetle attack by around 30%, he says. “We’ve seen encouraging results, but the pest pressure wasn’t that high, so the question is do we see similar levels of protection under higher pressure.”

The first year’s trials tested berseem clover, fenugreek, plus or minus buckwheat, while this year’s four tramline treatments built from a buckwheat base, adding in berseem clover and then fenugreek, but keeping total seed rates similar so competition wasn’t a factor in the results.

The trials will be taken to yield with the most promising overall treatments being used in a stacked approach next season, he says.

“Flea beetles seem to be the ultimate green-on-brown spotters,” he says.

Whether that is due to smell or colour is not clear, but avoiding fresh brown soil is an important tactic in reducing damage, he says.

That means the companion needs to establish quickly. “It’s one issue with fenugreek, which we’ve tried in various mixes – it’s slower than oilseed rape, and proved very marginal in what it offers in our trials.”

Buckwheat fulfils the quick-growing criteria, but variety can make a difference to its effectiveness. “Our first variety had very few leaves and went to flower quite quickly. We then found another variety, Lifago, which has a lot of broad, large leaves and is slower to run to seed, and that made us realise different plant types will make a difference.

“We can now place something with the rape that provides a canopy during that early phase. This can help the rape in terms of root structure, and if we put another companion with it, such as vetch, we have a nitrogen fixer, which can potentially be left until the spring.”

Where flea beetle is the primary concern, he recommends leaving a long stubble, and use buckwheat with early nutrition. “If I’m looking at helping the root structure of the oilseed rape plant, then I would use buckwheat, vetch and probably some phacelia, but not too much, as that grows quickly as well.

“The vetch root going down with the oilseed rape makes a beautiful combination. We use a spring vetch, such as Bingo, in the autumn because of its vigour.”

Adding some “rocket fuel” in the form of digestate or sewage sludge will also help get plants away. Avoid high seed rates, as this results in “pencil-thin” stems at high risk of being severely compromised by larvae.

“I want a plant that can survive the larval stage by being well-branched, with a big stem and root system. You won’t get that from over-planting seed.”

The key is getting an even establishment of each, which means a dual hopper drill is ideal, but mixing pre-drilling in a cement mixer works as well. “Don’t put too much seed in the drill to keep it evenly mixed and prevent the different seed settling out,” he advises.