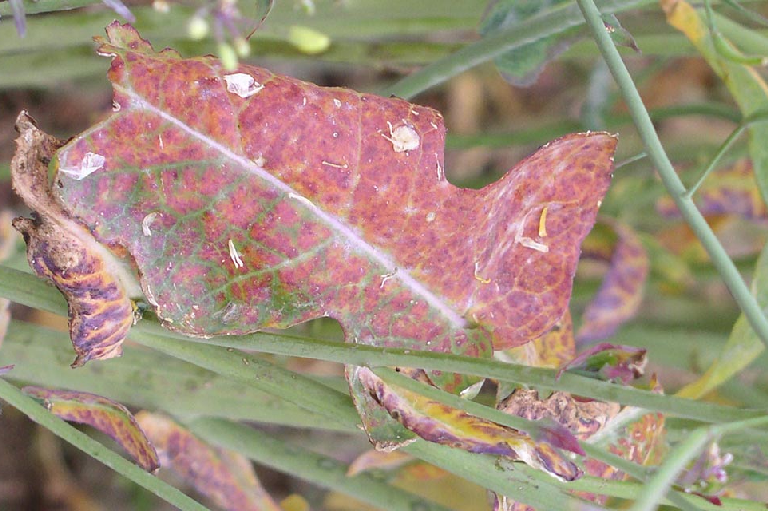 Oilseed Rape, brassica and lettuce crops. Cruciferous weeds such as shepherd`s purse and charlock and a range of other commonly occurring species including chickweed, corn poppy and scarlet pimpernel.

The symptoms which can appear in late spring, are an interveining yellowing of the leaves and a red or purpling of the leaf margins which can be confused with nutritional disorders.

The disease is transmitted by several aphid species, but primarily by the peach potato aphid (Myzus persicae), during the autumn.

Seasons when aphids are numerous, which typically follow mild winters and warm springs, or proximity to infected sugar beet crops.

TuYV is thought to be widespread throughout the UK although more prevalent in the oilseed rape growing areas in the south of England and crops are most at risk in mild autumns favourable for aphid invasion.
This disease is a potential major problem and can cause yield losses of up to 25 % as well as reductions in oil content.

• Control of aphid vectors with foliar insecticides, however the vast majority of M. persicae are now MACE (resistant to pirimicarb) and quite a high proportion are KDR (i.e. resistant to pyrethroid insecticides). There is no resistance to neonicotinoid insecticides.
• Resistant oilseed rape varieties such as Amalie.
• Insecticide seed treatments did prove to be effective method in controlling aphid vectors and protecting yield potential from this virus