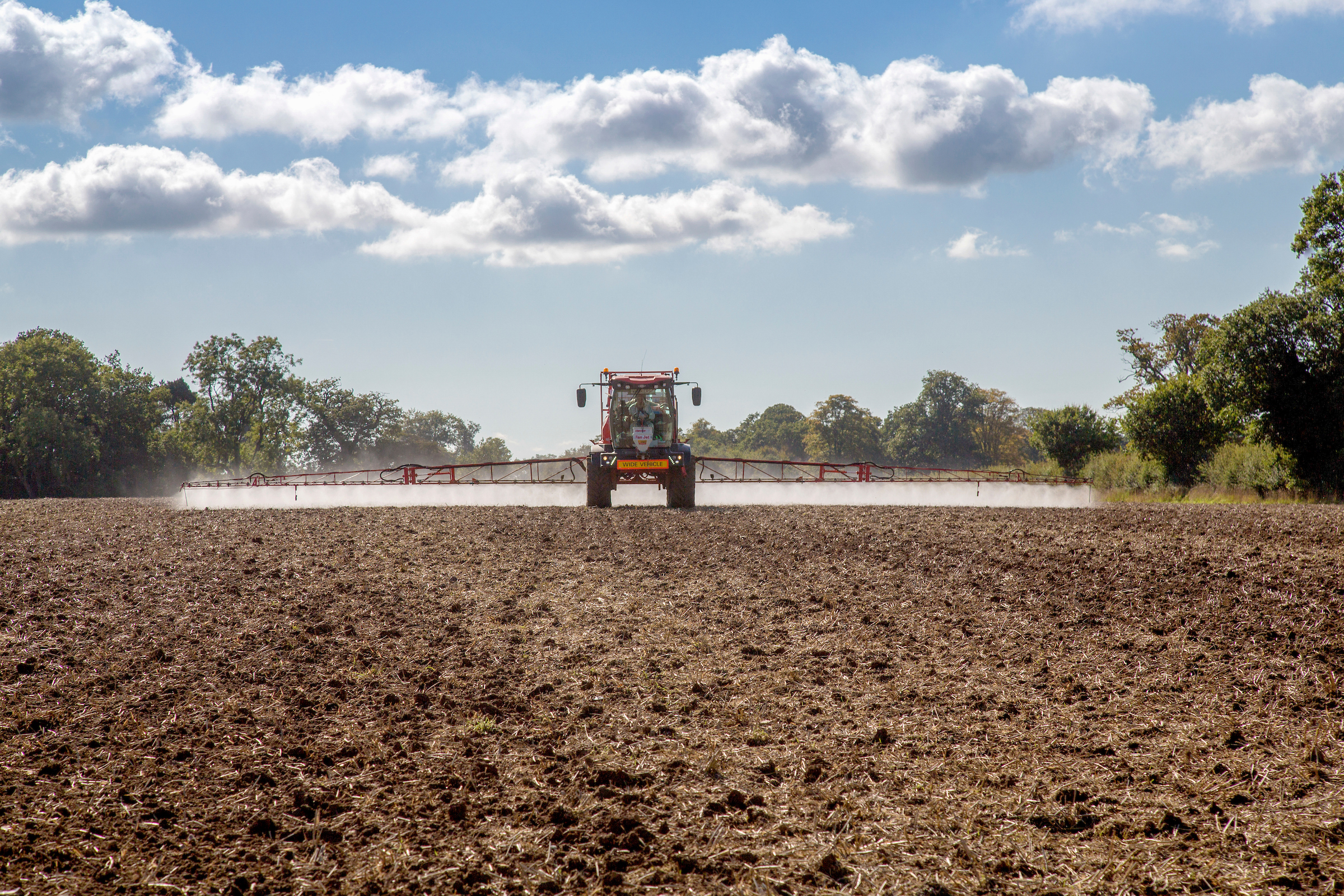 Using glyphosate always needs to be tempered with caution. As a non-selective herbicide, the last thing as a sprayer operator you want is for it to drift onto non-target crops.

Towards the end of the growing season, there are two types of application that growers might be making with glyphosate: harvest management and patch spraying.

In this blog, we look at best application advice for harvest management in oilseed rape and cereals, and for patch spraying – for example black-grass in cereals.

The indeterminate growth of oilseed rape can make harvesting the crop a challenge, as it can result in uneven ripening between branches. Green material, whether the crop or weeds, will slow down combining using more fuel.

“Oilseed rape should have already begun to senesce when you spray. You cannot push the crop too far off its natural timetable without downsides,” he says.

Select an area of the crop which is representative of the field as a whole. Then select an area of the canopy which is typical of the maturity of the majority of the crop. This may be pods in the middle of the main raceme or on side branches depending on the canopy. Pick at random a total of 20 pods. If in at least 15 of these pods, two-thirds of seed have changed colour from green to brown it is safe to desiccate.

When it comes to the application, there are potentially targets throughout the canopy ranging from the pods, especially if using a pod sticker in the mix, to green material in the middle of the canopy and any weeds in the canopy base, says Matt Redman, a farmer and sprayer contractor from Redman Agriculture in Cambridgeshire.

“You’re looking for some penetration throughout the canopy, rather than keeping it in one specific zone,” he says.

“I usually use an 03 Guardian Air nozzle for two reasons – one to control drift as you’re using glyphosate, but it also helps get penetration through the canopy and gives you the splatter effect of an air induction nozzle when it hits the target so you get the coverage.”

Water volume will be anywhere between 100 and 200 L/ha, he says, with final choice determined by wanting to maintain a 2.5-3 bar pressure for the nozzle chosen.

Typically, he aims for around 12 km/h. “It depends on how tall the crop is. You might be a bit slower if it is a big crop as you don’t want to be bashing it about, but if you have high clearance and it’s not too tall you can be a little quicker.”

If possible, try to spray earlier in the day, advises Mr Siggs. “Higher humidity means the plants’ stomata are open, which improves penetration and product efficacy.”

Finally, remember there is a 14-day statutory interval between application and harvesting.

As in oilseed rape, glyphosate applications pre-harvest can reduce green material, including immature tillers and improve harvest efficiency. It can be particularly valuable in wet seasons and tends to be used more for that reason in the north and west.

Timing is critical. Glyphosate should only be used when the grain has less than 30% moisture content, usually 1-3 weeks before harvest, when the grain is at the hard dough stage. Do not treat crops destined for seed, adhere to the statutory harvest interval of seven days and always check with the end user before applying.

1)      Has the peduncle, situated at the top of the stalk immediately below the ear, started to lose its green colour and turn brown?

2)      Does a thumbnail indentation hold on 20 grains from the centre of ears collected from various areas in the crop?

If the answer to any or all of these is yes, the crop should be at the right stage for spraying but confirm any estimate of moisture content with a moisture meter.

Spraying set up should be similar as for oilseed rape, according to Mr Redman. “It’s a similar sort of target. The plant is senescing, so you want to get it into the canopy, and sometimes you’re also using to clean the crop up from weeds to make combining easier, so you’re looking to penetrate the canopy for that.”

It might be a little easier to go quicker, but Mr Redman suggests 12-14 km/h is still the limit. “You’ve still got to hit the target and keep the boom at the optimum height, and on hard ground it can be harder to maintain boom stability.”

Another use of glyphosate is to spray off crops where weeds, especially grass-weeds such as black-grass, brome or ryegrass have reached population levels that are better controlled to prevent seed return than combining the crop.

Satellite imagery can be used to pinpoint areas with greater biomass resulting from weed infestations, he explains. “Within FieldView there is a feature called autozoning, which takes the satellite image and automatically creates zones based on the differences in biomass in the field.

“You can tell the system to create two zones – spray and don’t spray, to create the prescription for the Roundup. It tells you exactly the size of the area being treated and using the rate calculates the amount of product required. If you were just doing it by eye and turning the sprayer off and on manually, it’s an unknown quantity.”

That prescription can then be loaded into the sprayer’s work computer, and in newer sprayers with section control, the sections will come on and off as the sprayer goes in and out of the area to be sprayed, he says.

“You can record the ‘as applied’ map in FieldView so you can see exactly where it was applied,” he adds.

For the spray application, Mr Redman says patch spraying will likely require going a bit slower, especially if you’re doing it by eye, and to reduce drift as much as possible.

“I might use a slightly larger nozzle to reduce drift and drop pressures. You can drop to 1-1.5 bar and maintain a spray pattern with a Guardian Air or Amistar type nozzle.

“But the other set up will be similar to an oilseed rape desiccation or harvest management spray,” he says.

Most sprayer operators are following Mr Redman’s advice on using air induction nozzles for these applications – two-thirds for oilseed rape desiccation and wheat harvest management, dropping to 60% for patch spraying.

Angling these nozzles is also common at 61-62% for desiccation and harvest management.

There’s less agreement for water volumes, where 59% are using 200 L/ha for oilseed rape desiccation, and a further 20% are at 150 L/ha. That could be a hangover of requiring 200 L/ha for diquat applications, wonders Tom Robinson an independent spray application specialist.

“Coverage is less important for Roundup, but it might be to get the spray down into the canopy using bigger nozzles. If that’s what they’re comfortable with, that’s fine.

“However, Roundup, by and large, does perform better at lower water volumes.The only concern would be  if the spray is not getting to where it is needed.”

For the other glyphosate applications, 100 L/ha is much more commonly used by sprayer operators.

Why are we doing this series?

On top of that are field factors, such as the target’s characteristics like shape, structure and size, and weather that all might affect performance. By the time the spray reaches its intended target, the final dose could be very different to what it was when put into the sprayer.

Blog 7 in the series of Top Sprayer Tips for the Season Ahead will be available from August 2nd, 2022.

How to maximise returns from fungicides through spray application