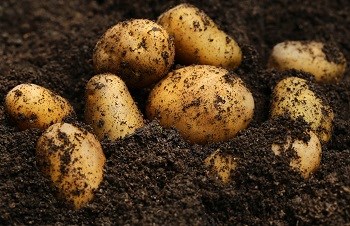 Alternaria species can be found in soils around the world and it is considered to be one of the most aggressive soil-borne pathogens known to man. Reported losses in the published literature range from 5-40% in potato and 35-78% in tomato. It is also known to exhibit harmful effects on animals and humans with more than 70 toxins produced by the mycotoxin of Alternaria found in a wide range of foods and animal feeds.

The focus of potato growers and their advisers is often Alternaria solani, which is recognised as the cause for most early blight, and to a lesser extent Alternaria alternata, which is associated with brown spot, a secondary threat that enters the plant via earlier damage. Both species can be found wherever early blight is detected. Other species of Alternaria, namely A. arborescens and A. pori are also found on leaflets with symptoms of early blight in potatoes.

Early blight has been the subject academic research for more than a century, but comparatively few papers have been published. The focus of these has been screening methods and genetics for resistant varieties with a leaning towards Alternaria in tomato. Potato has been a secondary focus. This is despite potato being recognised as the fourth most important vegetable crop worldwide as measured by annual production and consumption.

A research review published in February 2021 sought to address this knowledge gap by considering some of the underlaying factors of infection alongside the potential of practical strategies at the field level to reduce the incidence of crop damage. Here we summarise what is known about early blight and the methods of control.

The optimum temperature for early blight epidemics is in the range of 20-30 o C. As few as three hours of continuous leaf wetness between 21 and 25 o C is sufficient for lesion formation. At 24 o C +/- 2 o, the infection appears within four to six hours of leaf wetness. A high relative humidity is also important in triggering spore formation.

The germinating spores of A. solani and A. alternata are also able to survive dry conditions by pausing development before recommencing the process once rewetting of the leaf occurs. The climatic conditions required of Alternaria spp. are both distinct and similar to those required for late blight (Phytophthora infestans) sporulation.

Both require high relative humidity to support infection and development and can pause growth during dry periods or if temperatures fall or rise outside the required range. Late blight, however, can sporulate at lower temperatures, typically above 6 o C if the air is moist.

There are significant differences between the dispersal range of A. solani and A. alternata that explain why outbreaks in a crop are not linear and why each species requires a separate approach to preventative management.

The dispersal range for A. solani is limited to within the proximity of the field. This contrasts with that of P. infestans which can be hundreds of metres or even kilometres. In contrast, A. alternata can spread further than A. solani and the concentration of spores is significantly greater (up to seven times), probably due to being smaller than their A. solani counterparts.

This finding suggests that new infections of A. alternata probably come from sources surrounding the field, whereas the localised canopy of
host plants within a field is the primary source of A. solani.

Infected plant material on the soil surface can harbour the disease until the following season. A. solani can overwinter with or without a host in a broad temperature range of -3 to 21.2 o C. Research has found that the fungus can survive in the soil for more than eight months but not 16 [months]. This suggests a minimum rotation length of two years is necessary, although this will be insufficient for
management of some other pests and diseases.

Plants showing nutrient deficiencies are more susceptible to infection. Nitrogen has been found to be the most significant nutrient in promoting resistance to early blight. To support plant health while
maximising yield, nitrogen applications should be split across two to three timings.

Unlike nitrogen, phosphorous and potassium are not considered as essential factors for early blight infection. In contrast, boron and zinc are important in sustaining plant resilience against early blight as deficiencies in these micronutrients results in leaky and unstable cell membranes, which release large quantities of organic compounds that could be a suitable food source for Alternaria species.

Soil texture has also been associated with early blight. It is noted that the incidence of early blight in crops on sandy soils is greater after a period of heavy rain, possibly due to nutrient deficiency. It is also noted that rotations tend to be shorter on sandy soils and that populations of plant parasitic nematodes tend to be higher on these soil types. This may increase susceptibility to early blight through damage to plant growth and chlorophyll content.

Decision support systems intent on promoting the timely use of fungicides were developed in the 1970s and ‘80s.  As these models have been refined, there have been instances of success, but it would be wrong to look at the potential of forecasting systems in isolation. The Alternaria genotypes within an existing field population have the potential to develop reduced sensitivity up to resistance.

Resistance to strobilurine-fungicides belonging to the Quinone outside Inhibitor (QoI) mode of action group is now widespread across North America and Europe.

Monitoring indicates that SDHI-fungicides show an incomplete cross-resistance pattern in Alternaria species, for example, isolates showing the sdhB-H278Y mutation were resistant to boscalid (a pyridine-carboxamide) but controlled by other active substances in the same mode of action group such as fluopyram (a pyridinyl-ethyl-benzamide).

DMI fungicides such as prothioconazole (a triazolinthione) have demonstrated a stable sensitivity against the dominant Alternaria species over many years with no shift in sensitivity seen in-vitro test systems. This supports the use Caligula (fluopyram + prothioconazole) as an effective fungicide for use against Alternaria.

Plant host resistance is of limited value for the long term because of the evolutionary potential of the pathogen and the inoculum pressure. As the resistance genes in the plant coevolve with those of the pathogen virulence it follows that repeated production of the same varieties is unsustainable. Instead, the implementation of recognised cultural practices as part of a wider integrated management plan are considered the basis of control although the value of some is questioned.

Eliminating weeds such as Black nightshade (Solanum nigrum) which is considered a potential source of inoculum of Alternaria can reduce the risk of sporulation. Rotation is accepted as the first step to an integrated programme, but as most rotations are already far longer than the two years considered necessary to minimise the onset of early blight infections it is difficult to see how much more this management decision can contribute.

Other interventions, such as intercropping and cover cropping show promise, but can result in difficulties at harvest while the nutritional needs of any intercropping crop also need to be considered. The use of biological agents is one area of crop management that has shown potential and warrants further investigation. The pre-treatment of tubers with an antagonistic agent led to decreased infection in new- crop tubers. Several explanations as to how this is achieved have been proposed, but no firm conclusions have been drawn.

For many growers 2012 will be remembered as one of the wettest years on record, but a dry start to the season convinced Andrew Blenkiron, manager at Euston Estate, that the estate needed more water storage capacity.

Weed profiles and populations will vary up and down the UK as well as from field to field. But, a robust weed control programme and good application technique will pay you back in good crop establishment with minimal weed competition. Read on for four tips to help you optimise your yield this season.