Building a dataset from the farm that will enable more informed decision-making about variable seed rate applications and input decisions was the primary driver for Lincolnshire Wolds farm business RM Cottingham to trial Climate FieldView.

But the ease with which it helps process on-farm trials data has been an added bonus, says farm agronomist Alex Borthwick.

The farm has installed two Climate FieldView Drives, which will rotate between equipment such as the farm’s Bateman sprayer, New Holland combine and John Deere tractor pulling his Vaderstad drill.

“The data collection has been fantastic – it’s straightforward and simple. It’s quicker to set up a job on FieldView than it is the actual sprayer. You can create pdf reports of jobs, which gives me an application map, area, quantity of product, but also weather data including temperature, wind speed and direction as well as start and finish time. I can use this for assurance purposes and record keeping.

“We’ve also enjoyed remote view on the combine, which was beneficial to see progress of the combine in the field, and when to help move the combine. I really like you can use it on the iPad straightforwardly and don’t have to be sat at the desktop computer.”

The main aim for trialling the system was to build a big dataset for the farm year-on-year, stored in one place, making it easily accessible and to be able to compare things fairly easily, says Mr Borthwick.

“I want to be able to spot seasonal trends and compare variety performance, soil types and use it to help with variable rate applications for seed and possibly fertilisers in the future. I see data collection as being key to that.

“But looking at what we’ve got from the farm trials, we’re going to get a big benefit from that as well.”

The farm does several field-scale trials each season to test new practices or trial new products. One such trial this season was comparing Bayer’s Aviator (prothiconazole + bixafen) in its first year of commercial use as a flowering spray in oilseed rape with the farm standard, Amistar (azoxystrobin). 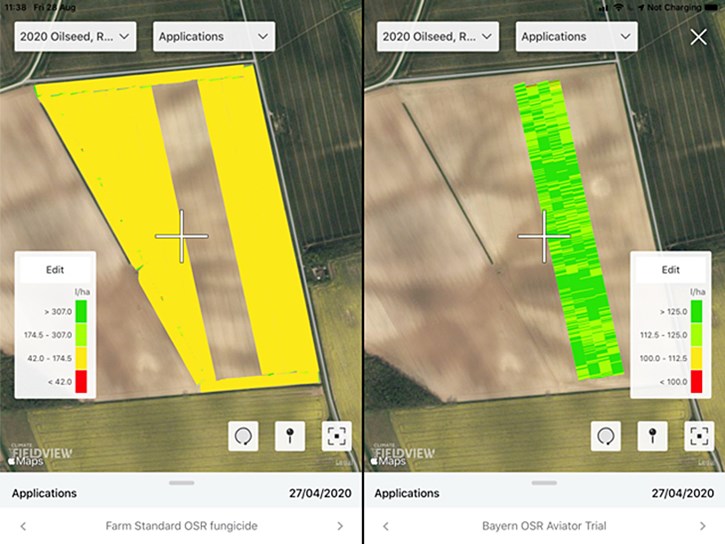 Those areas are then easily comparable on different views, including at harvest, by simply selecting the different areas.

In Mr Borthwick’s trial the 6ha block of Aviator yielded 4.73 t/ha compared with the 6/4ha block of farm standard at 4.48 t/ha. “When you just look at the yield map, you couldn’t see much difference. But with FieldView when you select the application areas it showed a 0.25t/ha difference, which with oilseed rape at £330/t it’s more than an extra £80/ha, which more than paid for the difference in application cost.” 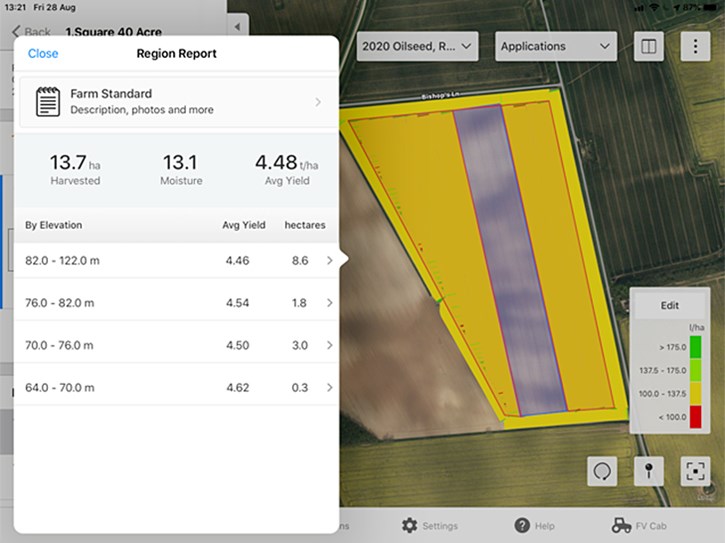 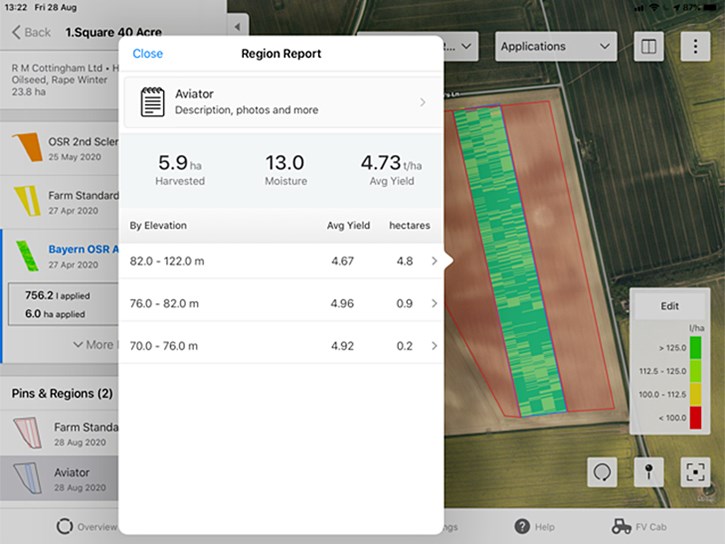 He was also able to compare the areas during the season using the field health satellite imagery and a crop water use view. It was the latter that most intrigued him.

“On the field health maps we didn’t see any difference, but on the crop water use map from about 10 days to a fortnight after application we could see to the line where the application had gone. 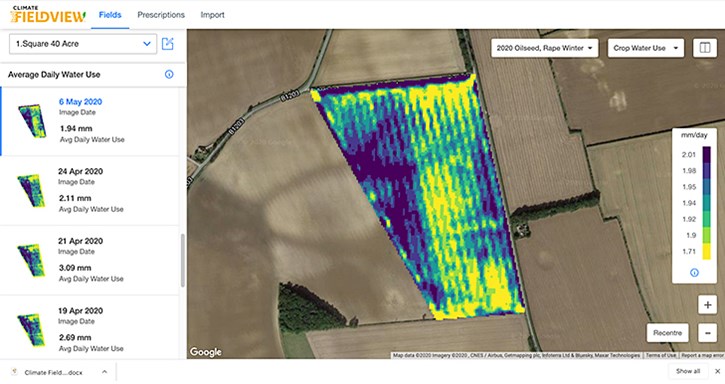 “It made me think there’s more than just looking at green area index to see what’s going on. I don’t know whether the SDHI in Aviator was reducing transpiration   so I need to do some more digging to find out more, but the yield results showed there was something going on.”

The FieldView platform made it easier for him to compare than his existing yield mapping from the combine, which he imports into Gatekeeper, he says. “I can see the differences and variances doing that, but not to the same levels as I can with FieldView.

“It also does a lot more as a platform on its own, although it’s not complete as a system. I’d like to have the ability to overlay maps rather than comparing them side-by-side, for example, and for it to be easier to create my own plans rather than just data capture, but I’m hopeful that will come in future.”

But FieldView has impressed him more than enough to suggest that he will continue to use it once his free trial period ends, he says. “It is already adding value from what it is doing. We were quite excited to be able to trial it, and everybody on the farm has really bought into using it.”

FieldView unlocks the real power of your farm data – bringing it to life interactively on one screen and in real time. Find out more.