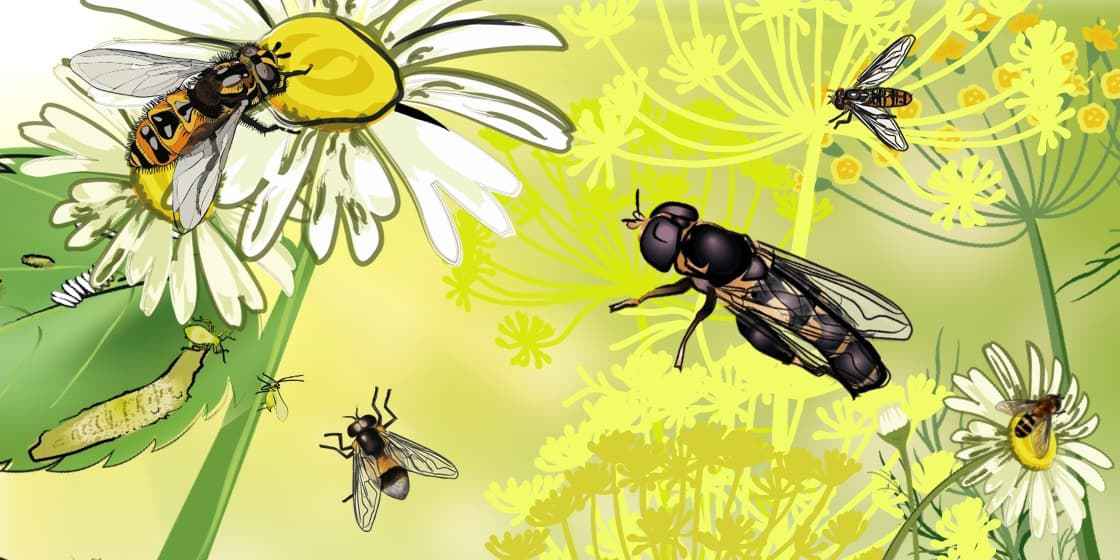 Hoverflies may not appear to be the most intriguing of insects, but they do a lot to protect our crops and many ecosystems during the short lives that they lead. Although they may look like bees or wasps, there are plenty of things that stand out about them in comparison — which is why we’ve created an infographic to take you through the best hoverfly facts.

Want to know more? Here’s a breakdown of the best facts about hoverflies in more detail.

Sitting within the Syrphidae family, the hoverfly is also known as the ‘syrphid fly’ or ‘flower fly’ due to their common habitat around flowers.

Almost all hoverflies have a ‘spurious vein’ on their wings

Also known as the ‘vena spuria’, the spurious vein on a hoverfly’s wing is unique to its family, as it doesn’t connect with any other veins on the span of the wing. Only one British hoverfly species (out of 6,000 worldwide) lacks a spurious vein.

There are over 6,000 hoverfly species across the world

Around 6,000 species of hoverfly in 200 genera have been discovered worldwide. They can be found in most climates except extreme deserts, Antarctica and incredibly high latitudes.

270 hoverfly species exist in the UK

These hoverflies emerge between March and November, in the months of spring, summer and autumn. However, only 40 of these species are commonly seen. 26 species have been identified on Bayer’s Orchard Farm in Essex since July 2018.

Hoverflies live from a few days to a few weeks

Most adult hoverflies live an average of 12 days, but their life span can vary depending on the species. The ‘Hammerschmidtia ferruginea’, for example, has been found to live up to 55 days.

After wild bees, hoverflies are the second-most important pollinators

As regular flower visitors to a wide range of plants and agricultural crops, hoverflies are some of the most important pollinators in many ecosystems. Although they can’t carry as much pollen on their bodies as bees, they can travel greater distances and make more flower visits.

Whilst adult hoverflies feed largely on nectar and pollen, hoverfly larvae feed on the likes of decaying animal matter, thrips and aphids (depending on the larvae species). Aphids cause millions of pounds worth of crop damage every year, so hoverfly larvae are almost essential in protecting agricultural farming.

Hoverflies are some of the best mimickers of bees and wasps

‘Batesian mimicry’ refers to when a particular species mimics another unsavoury species to protect themselves from predators. In the case of the hoverfly, it does an impressive job of mimicking bees and wasps — in fact, it’s one of the best examples of Batesian mimicry in nature.

Not only are they furry like ‘Hymenoptera’ (the family that wasps and bees sit under), but some species also lay their eggs in bees’ nests, wave their front legs to resemble antennae or pretend to sting when provoked.

Some of the flowers that hoverflies pollinate have also learned to be skilled at mimicry. The orchid species ‘Epipactis veratrifolia’, for example, mimics the alarm pheromones that aphids release to attract hoverflies.

Want to embed, adapt or otherwise re-use our hoverfly facts infographic? Please feel free — we’d just ask that you link back to this page when attributing the source.

Find our new hoverfly guide for some key facts on hoverflies and why they are so important for our food system.