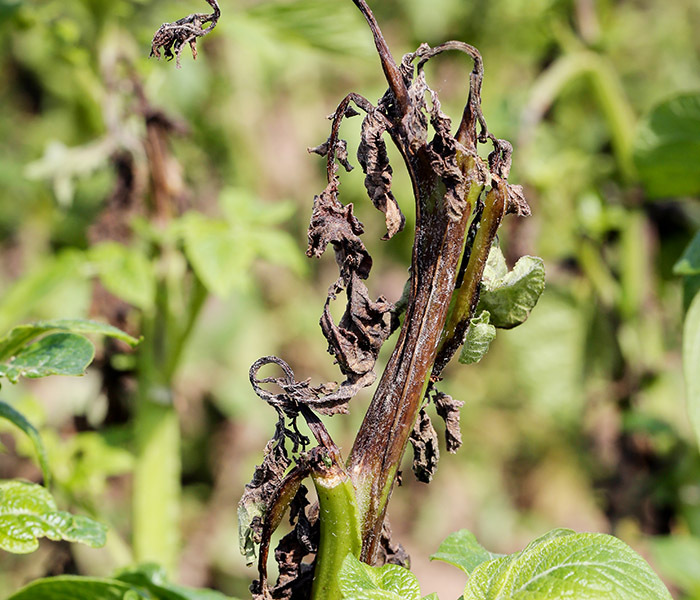 Researchers at the Sainsbury Laboratory at Norwich are closing in on a genetically modified variant of the UK’s most popular potato variety – Maris Piper – which is not only resistant to late blight, but also less susceptible to bruising and can be stored at cold temperatures without accumulating reducing sugars. This project is a collaboration that also involves UK start-up BioPotatoes, and the US company Simplot Plant Sciences.

There are several hurdles left to clear before a dossier can be submitted to the regulatory authorities seeking approval for its commercial cultivation, but in summer 2019, Professor Jonathan Jones and his researchers moved one step closer:

“We have lines that look commercially viable for cultivation in the UK,” says Prof Jones.

“Yields from plots of modified and non-modified Maris Piper harvested this summer were indistinguishable, suggesting that these genetic benefits have been successfully introduced without detrimental impact to performance.”

The focus of the research has been to find, evaluate and introduce sources of resistance from distant relatives of the potato without unwittingly introducing negative characteristics. The first generation of this work is now approved for commercial cultivation in the USA.

“In addition to resistance to the late blight pathogen Phytophthora infestans, we have also introduced the so-called ‘Innate’ genes identified by Simplot which reduce bruising and silence the gene responsible for invertase, which causes the accumulation of cold-induced reducing sugars. The benefit of this is that you have a potato that doesn’t bruise, or blacken when cooked at high temperatures, such as when frying or crisping,” Prof Jones says.

Such developments are key following the withdrawal of chlorpropham (CIPC), as the ability to store at colder temperatures would also reduce the incidence of sprouting and production of acrylamide (classed as a probable carcinogen) on high-temperature cooking.

Introducing genes might seem complicated, but the process is merely a refined version of something that happens in nature. Agrobacterium – a soil bacterium – has evolved to deliver DNA to engineer plants to make molecules only the bacterium can utilise. Researchers all over the world have adopted this method to deliver DNA for crop improvement.

“The sweet potato also carries DNA from Agrobacterium, but the difference from current controversies is that it received it naturally about 3,000 years ago, before it was domesticated,” says Prof Jones.

Using Agrobacterium, Prof Jones' team at the Sainsbury Laboratory have begun stacking resistance genes to extend and expand the capacity of the potato to perceive when it is attacked by blight and then activate its defences. Black nightshade (Solanum nigrum) for example, never succumbs to late blight so researchers have been investigating a diploid ancestor, American black nightshade (Solanum americanum), and identified two such “perception genes” that can be incorporated into domestic potatoes.

“If the whole area of Maris Piper grown in the UK was planted with the improved Maris Piper we have developed at the Sainsbury Laboratory, I am confident it would remain resistant to the current strains of blight for many decades, because it would take this long for the pathogen to develop multiple mutations capable of overcoming the three resistance genes we have stacked and successfully introduced,” explains Prof Jones.

Public engagement will be key to change attitudes towards GM

While the output of his work is still several years away from commercial cultivation and may be many more before it gains acceptance in Europe, he is confident that once consumers and regulators are presented with a product of real benefit to society, attitudes might change.

“I’m convinced that the future of food production will need genetic modes of action for crop pest and disease control,” he says.

“My strategy is to develop something that works, and we are close to delivering that, so at some stage someone will have to come up with the funds needed to submit a package to the regulator justifying its commercial approval.

“At the moment this is difficult to push through under European Union regulations. A silver lining around Brexit is that it offers the potential to set a science-based regulatory framework that evaluates the methods of crop improvement on the basis of their purposes and properties, not on the method by which they were made.”

International trade is another issue, but with the UK a net importer of processed potatoes there is an opportunity to take more of the domestic market before there is a need to worry about exports.

“We cannot overlook the value of maintaining trading relationships with our near neighbours. Maris Piper is an obvious variety to start with as it is a domestically focused variety. Unfortunately, it is not a suitable crisping variety, but we are working to introduce the same characteristics into Hermes,” he says.

Changing public opinion in favour of plant biotechnology is a challenge, but one that is not insurmountable.

“The potatoes we are developing would not reduce consumer choice but expand it. The technology has been shown to be safe so there is nothing to fear. Once consumers understand that potato products produced from the crops carrying natural resistances, albeit introduced by transgenic means, are safe, then those who are not bothered by the issue will willingly purchase them,” Prof Jones suggests.

Earlier this year the Sainsbury Laboratory was granted permission by Defra to proceed with three years of field trials under controlled conditions. The next phase of trials, funded by the Biotechnology and Biological Sciences Research Council (BBSRC), will see more extensive yield trials for 12 lines of improved potato varieties, before the final GM Maris Piper (“PiperPlus”) can be taken forward for regulatory assessment and commercialisation.

What is important to this farmer when choosing tuber treatments in potatoes?