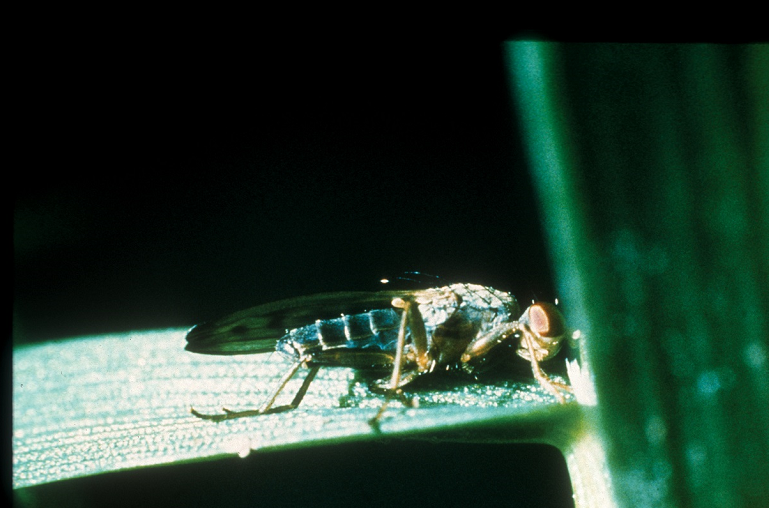 The yellow cereal fly is orangey/yellow in appearance with distinctive black spots on the transparent wings. The maggots are very similar to those of the wheat bulb fly except that they are pointed at both ends and are yellowish/white in appearance and are up to 7 mm in length when fully grown. Opomyza and wheat bulb fly maggots can be found together in the same crops as they both feed at the same time of year.

Opomyza maggots do not leave entry holes in the same way as wheat bulb fly maggots. However, the feeding of both species creates exactly the same 'deadhearts'.

Eggs are laid next to host plants in late autumn which hatch the following January to March. The emerging maggots crawl up the tillers and then tunnel their way down into the centre of the shoots. This can be seen as a brown ring or spiral lesion. In contrast the wheat bulb fly maggots bore into the centre of the plant tillers leaving a distinctive ragged entry hole at the base of the shoot. When fully fed the larvae pupate in the host plant in May. Adults emerge the following month. There is only 1 generation per year.

As the maggots only inhabit one tiller, crops can tolerate invasion by compensating via other surviving tillers. Consequently impact on yield is very limited.

None established. October drilled crops are less at risk than earlier drillings. Control can be achieved with pyrethroids such as deltamethrin.