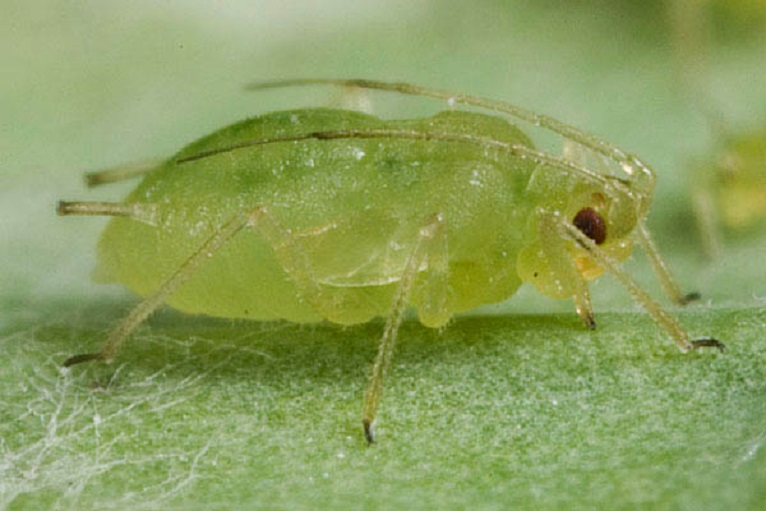 The most important virus vector is the peach-potato aphid (Myzus persicae) due to the large numbers that can invade UK beet crops. The potato aphid (Macrosiphum euphorbiae) is also significant in transmission of the yellowing viruses and the black bean aphid (Aphis fabae) can transmit BYV and BtMV. The black bean aphid normally appears in late summer and is generally considered a much lower threat than the 2 green aphids.It is rare that direct feeding by aphids causes detectable yield losses: it is the viruses they carry that cause the damage.

Peach-potato aphids usually arrive in the crop in early summer as winged females. A small but significant proportion of them carry virus and infect the crop as they feed. These females give birth to young wingless forms that feed and move to adjacent plants, spreading the virus. Subsequent generations continue the spread of the virus and enlarge the symptomatic yellow patches. Many peach-potato aphids overwinter in oilseed rape crops but few if any of these retain the beet viruses overwinter. The main virus source in the spring and early summer is infected beet on cleaner-loader clamps or sugar beet groundkeepers on which females feed before entering the crop. Essential hygiene precautions are to clear beet from cleaner-loader sites and spray off groundkeepers in set-aside before the new beet crop emerges. This also reduces the risk of downy mildew infection.

Black bean aphids are a serious threat in some central European and Scandinavian countries because of the feeding damage caused by large colonies. In the UK, even though large colonies can often be seen on odd plants in July, these are usually short lived due to rapid build-up of predators and pathogenic fungi. However, black bean aphid colonies building up before the middle of July can slow crop growth. Black bean aphids normally infest the heartleaves of sugar beet causing them to pucker and roll. The aphids are found on the underside of leaves, which because of the leaf rolling can sometimes appear to be on top of the crop. They can carry both BYV and BtMV but are generally less efficient vectors than peach-potato aphids.